Jonah Goldberg
|
Posted: Jun 13, 2018 12:01 AM
Share   Tweet
The opinions expressed by columnists are their own and do not necessarily represent the views of Townhall.com. 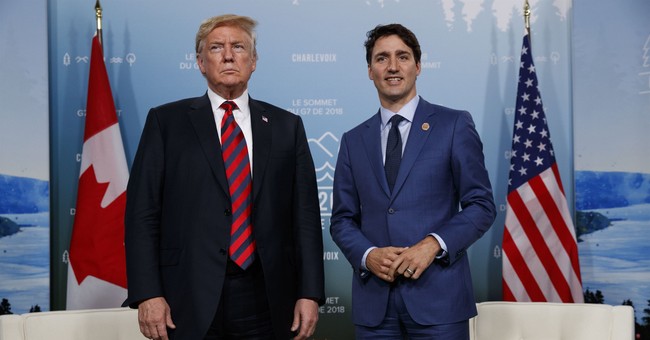 In Dante's "Inferno," the first circle of hell is for the virtuous unbelievers -- non-Christians like Aristotle, Socrates and Julius Caesar. The second is for those who give in to their carnal desires, your Cleopatra and Achilles types. So it goes, through the various vices -- gluttony, greed, wrath, etc. -- that send you to your own designated place of eternal torment.

The odd thing is, I can't seem to find the specific locale in the Stygian depths for Justin Trudeau, the Canadian prime minister. And yet, White House trade adviser and apparent theologian Peter Navarro said on "Fox News Sunday" that, "There's a special place in hell for any foreign leader that engages in bad-faith diplomacy with President Donald J. Trump and then tries to stab him in the back on the way out the door."

Navarro was talking about Trudeau's decision to hold a press conference in which he calmly, quietly and politely -- which is to say, Canadianly -- explained that our neighbors to the north would be responding to the White House's imposition of aluminum and steel tariffs with tariffs of their own, something the Canadian government had said it would do all along.

This infuriated Trump, who was on his way to Singapore for a meeting with North Korea's Kim Jong Un. On Twitter, Trump announced that he would instruct U.S. representatives not to endorse the official G-7 communique and taunted Trudeau as "weak" and "dishonest" for good measure.

Over on CNN, White House economic adviser Larry Kudlow repeated that Trudeau "stabbed us in the back" and insisted he apologize for his "betrayal." Kudlow, a friend of mine (who suffered a thankfully mild heart attack Monday night), went on to claim that the real reason Trump attacked our ally was to offer a show of strength before the Singapore summit.

"POTUS is not going to let a Canadian prime minister push him around," Kudlow told CNN's Jake Tapper. "He is not going to permit any show of weakness on the trip to negotiate with North Korea. ... Kim must not see American weakness."

Kudlow is a wonderful man, but this is barmy. Traditionally, the president of the United States is considered the leader of the free world. Well, being the leader of a coalition of powerful and rich countries is a stronger position than leader of America alone.

By throwing Canada under the bus -- with language we rarely use about our actual adversaries -- Trump and his subalterns were sending a message of American weakness, not strength. Sucking up to Russian President Vladimir Putin while hippie-punching Trudeau doesn't make Trump himself look stronger, either.

When you go into a negotiation with a barbaric rogue state, you want to be able to convince your adversary that you can deliver your allies when it comes to the final deal. Giving Trudeau a rhetorical wedgie sends the exact opposite message.

It also creates problems far beyond whatever comes out of Singapore. Part of Kudlow's complaint was that Trudeau's "betrayal" was a "sophomoric political stunt for domestic consumption."

Whether you think that's true or not, there's an important lesson here. One senior Trump adviser told The Atlantic's Jeffrey Goldberg that the Trump Doctrine could be summarized as "We're America, Bitch." That may not be an official policy statement, but that is the impression our allies are getting.

Trump is profoundly unpopular and distrusted among the electorates of many of our allies. When Pew asked about public confidence in Trump's ability to handle world affairs, 22 percent of Canadians expressed confidence in the president (compared with 83 percent for Obama). In Germany, only 11 percent trust Trump.

That's not a problem if you think we don't need allies, because they're all going to hell anyway. But don't be surprised if other world leaders decide it's in their interest to behave antagonistically toward America now that Trump has decided it's in his interest to do so to them.