Trump's Message to Syria Is a Muddled One

Jonah Goldberg
|
Posted: Apr 18, 2018 12:01 AM
Share   Tweet
The opinions expressed by columnists are their own and do not necessarily represent the views of Townhall.com. 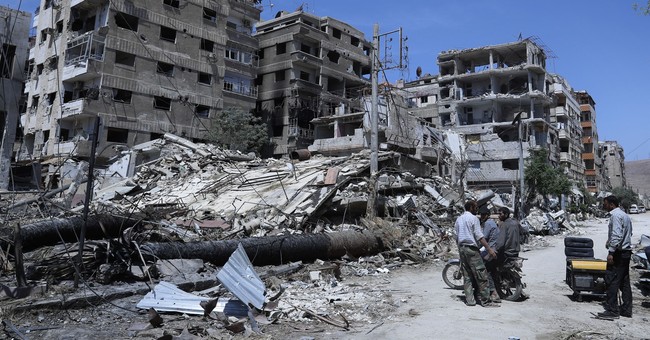 Some have said that the bombing campaign didn't go far enough, and I'm sympathetic to that argument. Empty buildings in the middle of the night are useful targets if you want to demonstrate symbolic disapproval, but the strikes did not do lasting damage to the Assad regime. That was the goal -- to make a point: Don't do that again.

I am also sympathetic to those who were concerned that the strikes could cause a precipitous escalation, drawing in Iran and, more importantly, Russia.

By all accounts, Secretary of Defense James Mattis and his Pentagon comrades won the internal arguments in the administration for erring on the side of symbolism. Ideally we would have destroyed the aircraft -- and the personnel -- that carried out the suspected chemical warfare, but it's hard for me to second-guess someone who has seen so much war and knows the region as well as anybody alive. I'm willing to defer to the generals on this one.

I am less deferential when it comes to the arguments used to defend the strikes. Over and over again, we hear that this was a "humanitarian" effort.

Trump has expressed justifiable horror in response to the use of chemical weapons. In announcing the bombings, he laid out the rationale for the attacks: "To deter the use and proliferation of chemical weapons, and to avert a worsening of the region's current humanitarian catastrophe." The British government was more explicit, stating that the "intervention was directed exclusively to averting a humanitarian catastrophe."

But what catastrophe did they avert? The chemical attack, as far as we know, had already happened.

Chemical weapons are a moral horror, and enforcing the near-century-old ban on them can be justified on humanitarian grounds. But when you talk to experts about why we should enforce the ban, the argument quickly turns to realpolitik: We don't want chemical weapons used on our troops or civilians.

"This very easily could happen in the United States if we're not smart, and if we're not conscious of what's happening," U.S. Ambassador to the United Nations Nikki Haley said on "Fox News Sunday." (Full disclosure: My wife works for Haley.)

That is wholly legitimate. It's the same logic we use for preventing rogue regimes from developing nuclear weapons. We don't do much of anything to prevent North Korea or Iran from brutalizing their own people, but we don't want them to have the ability to threaten our people or our allies.

But that argument has little to do with humanitarianism. We haven't told Assad that if he kills his own people -- by dropping barrel bombs on hospitals, by firing squads, or by blocking humanitarian aid -- we will punish the regime. We've said only that if he uses chemical weapons, he will pay a price.

Even here, our message is more muddled than it seems. If the National Security Council is to be believed, the Assad regime has used chemical weapons on its own people some 50 times since the Syrian civil war began in 2011. We've punished the regime twice.

Why those two times? Because there was video.

After the 2017 chemical attack that elicited our first attack, Trump told the New York Times: "I think it's a disgrace. I think it's an affront to humanity. Inconceivable that somebody could do that." He added: "Those kids were so beautiful. To look at those scenes of those beautiful children being carried out."

It was a disgrace. But so is all the ongoing slaughter in Syria, including the alleged 48 other times the Assad regime used chemical weapons away from the cameras.

The U.S. was right to penalize Assad, but it is not obvious to me that we are sending the Syrian president and his Russian patrons a coherent message.