Jonah Goldberg
|
Posted: Sep 22, 2017 12:01 AM
Share   Tweet
The opinions expressed by columnists are their own and do not necessarily represent the views of Townhall.com. 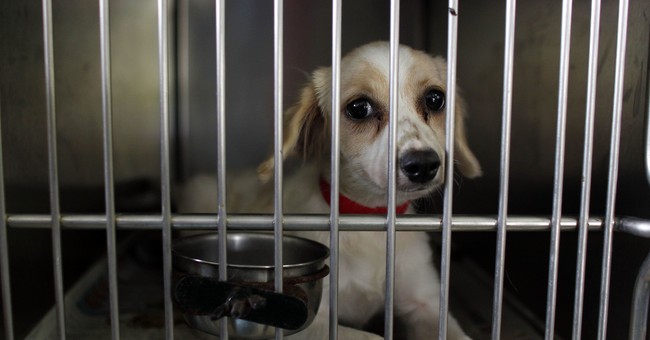 One of my favorite kinds of news stories is the report of a new scientific study that verifies the obvious. You've seen them. New research finds that heterosexual men are attracted to very attractive women. Evidence collected by wildlife researchers has confirmed that bears really do use the woods as toilets.

But some research that corroborates the obvious is exciting because some people refuse to accept the obvious.

Which brings me to the work of Dr. Gregory Berns, a neuroscientist at Emory University and the author of "What It's Like to Be a Dog." Berns has, from what I can tell, the best gig in neuroscience. He spends all day taking pictures of dog brains. Don't worry: He doesn't remove them. He uses magnetic resonance imaging to study what's going on in Fido's head. It's tougher than it sounds because the dogs have to hold absolutely still for Berns to get a good read. But that's OK. They got the goodest doggos around, as folks on dog-obsessed Twitter might say, to volunteer.

And what did Berns discover? Something that almost every dog owner in the world could have told you: Dogs aren't faking it when they act like they love you. Because it's not an act.

Berns and his team confirmed this through a host of tests that looked at different centers of the doggie brain and how they responded to different stimuli. In one test they alternated between giving the pooches hot dogs (the food, not Dachshunds) and offering them praise. Looking at the pleasure centers of the dogs' brains, the researchers found that nearly all the dogs responded to "Who's a good boy?! You are!" (or whatever they actually said) with at least as much pleasure as when they got a Hebrew National. A fifth of the dogs actually preferred praise to food.

Berns concluded that dogs derive as much pleasure from love as from food.

As a somewhat obsessed dog guy, I'm the first to concede that a central tenet of doggie philosophy is to reject the whole love-vs.-food paradigm as a false choice. Dogs are committed to the idea that there is no such thing as too much of a good thing. But as almost anyone who has come home to their dog after an extended absence will tell you, dogs don't go bonkers for missing loved ones solely because they think there's a meal in it for them.

And yet, there are people who argue almost precisely that. There's what I would call the dumb version and the smart version of that particular school of thought. The dumb version, as the label suggests, is dumb. It can be found in people who say things like, "Dogs just lick you for the salt," or, "It's just an animal; you shouldn't care about its feelings."

The smart version has more merit. Evolutionary psychologists and other scientists label dogs "social parasites" or, in the words of some, "con artists." They claim that dogs evolved from wolves to exploit our weakness for cuteness. They also note that dogs evolved an ability found almost nowhere else in the animal world: to read human body language and expressions. Indeed, Berns found evidence of this in his MRI studies.

Some, rightly, reject the term "parasitism" in favor of "mutualism," because while dogs certainly benefitted from the warmth of cavemen's campfires and the tossed scraps from their mastodon kills, they also made important contributions as guard dogs and hunters. Pat Shipman even speculates in "The Invaders: How Humans and Their Dogs Drove Neanderthals to Extinction" that dogs gave us a competitive advantage against our (presumably) hated rivals, the Neanderthals. Dogs -- or proto-wolf/dogs -- weren't so much pets as allies in hunting big game, helping us evolve as a cooperative species.

I think that's all true or at least quite plausible. But what it leaves out is the ingredient missing in almost all discussions of evolved behavior and genetic programming -- not just for dogs but for people, too. Dogs obviously evolved to depend on humans, but humans also evolved to depend on dogs. From our genes' perspective, we love our children to ensure that our DNA lives to see another day. But that's not how we consciously think about it, nor does that explanation diminish the experience of love or make it any less real.

Dog genes may be designed to con us, but the dogs themselves aren't in on the caper. They just love us, because that's what dogs do.

Share this on Facebook
Tweet
Pentagon Announces They Will Pay, Relocate Relatives of Afghans Killed in Drone Strike
Landon Mion
Texas Senate Passes Bill Requiring Students to Compete on Sports Teams That Match Their Biological Sex
Landon Mion
White House May End Up Pretty Embarrassed if They Have to Take Climate Change Out of Budget for Joe Manchin
Rebecca Downs
Jill Biden Campaigns for Terry McAuliffe: 'You Need Somebody That You Can Trust'
Landon Mion
Joe Manchin Has a Message for 'Self-Declared Independent Socialist' Bernie Sanders
Rebecca Downs
Bernie Sanders Says the Media is to Blame for Americans Not Knowing What is Included in Spending Plan
Landon Mion