Does a 'Never Trumper' Need to Be Forgiven?

Jonah Goldberg
|
Posted: Dec 28, 2016 12:01 AM
Share   Tweet
The opinions expressed by columnists are their own and do not necessarily represent the views of Townhall.com. 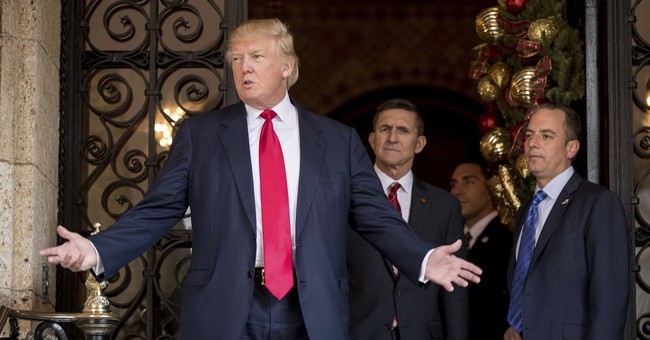 I've lost count of how many people have told me that since Election Day. Of course, the number pales in comparison with the legions who've told me I was "wrong about everything" this year and that the election of Donald Trump will spell the end of my relevance, my career and, in a few trollish instances, my life. But it's the unsolicited forgiveness that stings more.

My position as a committed "Never Trump" (and "Never Hillary") conservative in the primaries and general election earned the disappointment and wrath of a great many folks on the right, from longtime readers to longtime friends. Although I still feel in my bones that I have nothing to apologize for, it does seem to me that forgiveness, solicited or otherwise, should elicit some introspection.

Are my critics -- either the forgiving ones or the menacing ones -- right about me? Just how wrong was I?

I did get the election wrong. Although there were occasions when I wrote that Trump had a shot, certainly at the end I was convinced that he'd lose.

There is a weird, not quite fully baked idea out there that if you -- or me -- were wrong about Trump's electoral chances, that means you must be wrong about the man in full. There is no such transitive property in politics or punditry. I don't know what George Will said of Richard Nixon's electoral prospects in 1972, but even if he had predicted a McGovern landslide, that wouldn't mean he was wrong about the outrageousness of Watergate.

That said, I already feel comfortable admitting that, beyond my electoral prognosticating, I got some things wrong about what a Trump presidency will look like. Though many on the left and in the media see his Cabinet appointments and policy proposals as cause for existential panic, as a conservative I find most -- but by no means all -- of them reassuring.

I argued frequently that Trump's conservatism was more marketing ploy than deeply held conviction. But his appointments at the departments of Education, Health and Human Services, Labor, the Environmental Protection Agency and elsewhere suggest a level of commitment to paring back the administrative state that heartens and surprises me.

I am also surprised by the benefits of having a political novice take over the executive branch. From his phone call with Taiwan to his ad hoc bargaining with defense contractors, there is more of an upside to Trump the Disruptor than I had anticipated.

Of course, there is also a downside.

And that brings me to what I think I got right: Trump's character. I am not referring to his personal conduct toward women, a culture-war weapon that Trump and Bill Clinton together have removed from partisan arsenals for the foreseeable future. Nor am I necessarily referring to how he has managed his businesses, though I think those patterns of behavior are entirely relevant to understanding our next president.

What I have chiefly in mind is that rich nexus of unrestrained ego, impoverished impulse control and contempt for policy due diligence. I firmly and passionately believe that character is destiny. From his reported refusal to accept daily intelligence briefings to his freelancing every issue under the sun on Twitter -- including, most recently, nuclear arms policy -- Trump's blase attitude troubles me deeply, just as it did during the campaign.

On balance, I don't feel repentant. But I acknowledge that Trump has surrounded himself with some serious and sober-minded people who will try to constrain and contain the truly dangerous aspects of his character. If they succeed, I'll happily revisit my refusal to ask for forgiveness.