Hillary's Health is a Valid Issue

Jonah Goldberg
|
Posted: Sep 14, 2016 12:01 AM
Share   Tweet
The opinions expressed by columnists are their own and do not necessarily represent the views of Townhall.com. 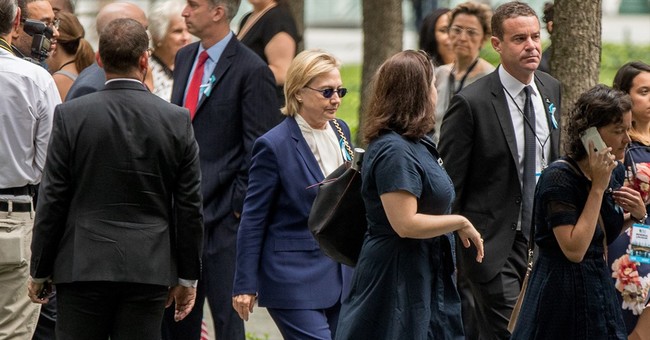 One of the most amusing spectacles of this election season has been the whipsawing of the loyalists. Repeatedly, spinners for Hillary Clinton and Donald Trump have been sent out to hammer this or that talking point, only to be left holding the bag when the candidate goes another way.

So far, Trump has been narrowly ahead in this important competition. But after Sunday, Clinton may have taken the lead.

For weeks, the official position of the chattering classes was that any inquiry into Clinton's health was "sexist."

As Democratic Sen. Amy Klobuchar told MSNBC's Andrea Mitchell on Sept. 2, "I have seen her personally. You've seen her personally, Andrea. She is in shape. She is strong. She just has a ton of energy. And I find this actually quite sexist when these guys are saying this. I think that that is not an issue at all and the American voters know that."

Last week, Clinton herself was asked if discussion of her health was sexist. She replied with a long, ironic "hmmmmmm" that typified her gift for political subtlety and nuance.

But that wasn't the only whipsaw. On Sunday morning, the Clinton campaign put out the explanation that the heat got to her. Social media lighted up with corroborations that lower Manhattan was the meteorological equivalent of the jungles of Borneo. Even New York Times columnist Paul Krugman testified that it was indeed "muggy."

My favorite take came from left-wing writer Leela Daou via Twitter: "What we REALLY should be talking about is why it's so damn hot on a September morning" followed by the hash tags #GlobalWarming and #climatechange. Not only is Clinton going to fight climate change, she's like a polar bear searching for an ice floe: proof that it's real!

Then, hours later, the campaign admitted that it wasn't the heat, but pneumonia. The dervishes suddenly threw the gearshift into reverse. Out with the meteorological hand-wringing, in with encomiums to Clinton's Stakhanovite stamina. Peter Daou (Leela's husband and a former Clinton adviser) tweeted, "Doing events with pneumonia shows how strong Hillary is. Her detractors have now lost another one of their hit jobs. They should be ashamed."

I have no sympathy for the spinners; this is the life they have chosen. And I have a word of caution for reporters who seem reluctant to cover certain issues if they think it's going to reward Trump.

It's true that the Trump campaign and its subalterns in conservative media have been dabbling in conspiracy-theorizing about Clinton's health. Indeed, the suggestion that Clinton's pneumonia is a vindication of the right-wing rumor that she's brain damaged is ridiculous. That doesn't mean, however, that reporters should take the Clinton campaign's word as gospel.

Journalism-school Jesuits have been saying that presidential candidates' health is relevant ever since FDR's "splendid deception." And in her FBI interview, Clinton seemed to invoke her concussion and subsequent blood clot as one of the reasons she couldn't recall security briefings. That's news. Period.

Besides, the greatest gift the mainstream media could give Trump, Drudge et al. would be to keep serving as Clinton's praetorian guard.

As this pneumonia episode demonstrates, Clinton's real problem isn't her health but the entirely valid perception that she's dishonest, secretive and exploits "the system" -- including the support of the mainstream media -- for her benefit.

In 2008, news outlets openly speculated about whether Sen. John McCain was too frail to be president. NBC News ran an Associated Press story under the headline, "1 in 4 chance McCain may not survive 2nd term."

People remember these things. When Clinton faltered on Sunday, she not only humiliated her most loyal servants, who were kept in the dark by a campaign terrified of playing it straight with voters and the media, she also made countless people say, "Looks like Drudge was right again."