Perry, Other Republicans Selling Their Souls to Trump

Jonah Goldberg
|
Posted: May 11, 2016 12:01 AM
Share   Tweet
The opinions expressed by columnists are their own and do not necessarily represent the views of Townhall.com. 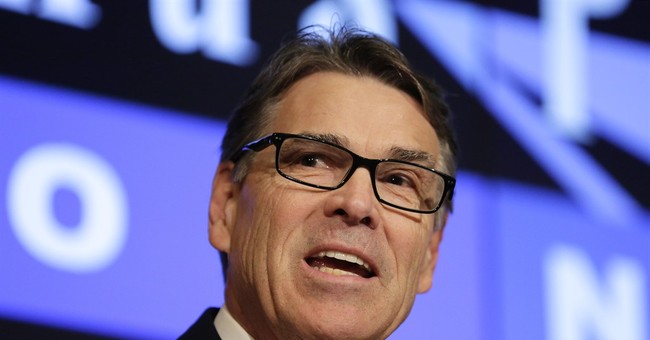 "Let no one be mistaken: Donald Trump's candidacy is a cancer on conservatism, and it must be clearly diagnosed, excised and discarded," former Texas Gov. Rick Perry declared 10 months ago. Trump's candidacy, Perry added, represents "a toxic mix of demagoguery and mean-spiritedness and nonsense that will lead the Republican Party to perdition if pursued."

Lest you're thrown off by the alliteration, "perdition" means eternal damnation in Hell.

Perry has since had an epiphany, selling his political soul for a seat on the Trump Train. He even says he's open to being Trump's running mate, which would make him a co-pilot (or co-conductor?) leading us down the tracks to Hell. ("Can I blow the whistle Mr. Trump?")

As Thomas More might say, "Why Rick, it profits a man nothing to give his soul for the whole world ... but to be Donald Trump's valet?

Perry is far from alone in his hypocrisy. With the exception of Sen. Ben Sasse, Speaker of the House Paul Ryan, former Florida Gov. Jeb Bush and a handful of others (including, I hope, Sens. Ted Cruz and Marco Rubio), the Republican aristocracy is for the most part bending its knee to the new king, proving that much of the "establishment" is exactly as craven as Trump always claimed.

Those who do not yield can hear the executioner's axe sharpening against the wheel. Trump has dispatched one of his top minions, Sarah Palin, to punish Ryan for his effrontery in second-guessing Trump's commitment to conservatism. She said she'll work to defeat Ryan's re-election bid this fall. "His political career is over," Palin said on CNN.

She'll probably fail, but the message is clear. The litmus test in the new Republican Party boils down to loyalty, not to a principle or conviction, but to a man: Trump.

It's a cult of personality, pure and simple. One cannot even agree with Trump on his "policies," because that is like committing to the blob in a lava lamp. Less than a week after Trump became the presumptive nominee, he'd already thrown his tax plan in the dustbin of history -- the very tax plan that Trump could never talk about intelligently, which nonetheless seduced, or suckered, so many supply-siders to his cause.

The GOP platform can now be written on a bumper sticker: "In Trump We Trust."

That was the upshot of Trump's weekend interviews. When ABC's George Stephanopoulos asked Trump if he needed party unity, the businessman shrugged. Unity's nice, Trump said. But he doesn't need it. He's more interested in winning the loyalty of Bernie Sanders' socialist brigades than he is in persuading conservatives he's one of them.

"I have to stay true to my principles also," Trump told Stephanopoulos. "And I'm a conservative, but don't forget: This is called the Republican Party, not the Conservative Party."

When Trump says "I'm a conservative," picture a car salesman insisting, "I'm a Tito Puente fan too." It's just something he's saying to close the deal. As for his adamantine principles, there is only one: The limelight belongs to him alone. (That is why Trump is reportedly considering speaking every night at the GOP convention.)

Conservatives who still have the courage of Perry's former convictions have no role in the party so long as Trump's running it. He has admitted that he doesn't want or need Reaganite conservatives; he'd rather rely on the rank and file supporters of a socialist instead.

For conservatives, party unity is another way of saying "suicide pact." I will never vote for Hillary Clinton because she believes things I can never support. I will never vote for Donald Trump because he's a bullying fool who believes in nothing but himself. The conservative movement can wait out a Clinton presidency intact. But Perry was right. A Trump presidency is a ride straight to perdition, with a capital H.