Jonah Goldberg
|
Posted: Jan 07, 2016 12:01 AM
Share   Tweet
The opinions expressed by columnists are their own and do not necessarily represent the views of Townhall.com. 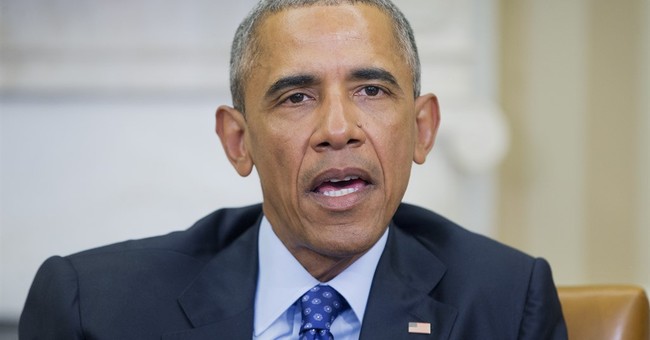 There has been a lot of talk -- almost all of it accurate -- about how Barack Obama's presidency has fueled the rise of Donald Trump.

The president's fans hate this talk, for understandable reasons. They see the president as dignified and cerebral. They see Trump as crude and bigoted, a "short-fingered vulgarian," as Graydon Carter famously put it.

The argument that Obama paved the way for Trump takes many forms. He "lowered the bar" for presidential qualifications, argues Peggy Noonan. Trump's Don Rickles act, writes Michael Barone, reflects "the coarseness of Obama's non-stop insults of Republicans and anyone who does not share his views and priorities."

"It is no accident that President Obama's America has given rise to Donald Trump," writes Ben Domenech, publisher of The Federalist. "It is an America that is more tribalist, where people feel more racially and religiously divided; more politically correct, where people feel less free to speak their minds; and it is an America where trust in the nation's elites, whose skills are credentialed but unproven, are at historic lows."

My colleague (my euphemism for "boss") at National Review, Rich Lowry, recently argued that Obama's contempt for the law and the Constitution is also partly to blame for Trump's appeal and sparked a new "post-constitutional" moment on the right.

For much of the Obama presidency, conservatives seemed to have intensified their reverence for the rule of law and the Constitution. But what did it get them? Obama went and did what he wanted to do anyway. He vowed to use his pen and phone like a ball and scepter. "Middle-class families can't wait for Republicans in Congress to do stuff," Obama told a crowd last year. "So sue me." He was referring to a lawsuit launched by then-Speaker John Boehner over the Obama administration's nakedly lawless chicanery implementing Obamacare. A few days later, the president demanded, "Really? Really? For what? You're going to sue me for doing my job?"

The problem: Obama the constitutional lawyer hasn't read his job description; it says the president should "take care that the laws be faithfully executed." Obama doesn't really care. He sees his job as doing the things he wants to do and being the sort of president his biggest fans want him to be. That's why over the holidays, he reportedly ordered his lawyers to "scrub" the laws to find ways he can take new unilateral action against gun ownership.

Well, two can play at that game.

Enter Trump, via his fabulous escalator. The GOP front-runner isn't openly contemptuous of the Constitution; it just doesn't enter his thinking very much. If he believes something is worth doing, he says he will do it. He makes little effort to explain how he will get Congress to agree, never mind write the laws the president is supposed to faithfully execute. And that's the way Trump's fans like it.

We've seen this sort of thing before. "I want to assure you," Franklin Roosevelt aide Harry Hopkins told New Dealers in New York, "that we are not afraid of exploring anything within the law, and we have a lawyer who will declare anything you want to do legal." When the Supreme Court continued to stand in his way, FDR tried to pack it with pliable hacks.

Trump has already spoken fondly of Roosevelt's internment of Japanese Americans (which was constitutional according to the court at the time. Eight of the nine justices had been appointed by FDR. The one Republican appointee was among three dissenters.) It seems a sure bet that a President Trump would follow FDR's -- and Obama's -- example in doing whatever he could get away with.

If Obama didn't inspire so much partisan loyalty from fellow Democrats (and the news media), it might have occurred to them that he -- and Senate Democratic leader Harry "nuclear option" Reid -- was laying down precedents that the next president would use and abuse.

But such realizations always come too late. During the height of the Watergate hearings, Alan Cranston, a Democratic senator from California, made an awkward admission: "Those who tried to warn us back at the beginnings of the New Deal of the dangers of one-man rule that lay ahead on the path we were taking toward strong, centralized government may not have been so wrong."