Too Late for Carson to Catch up on Homework 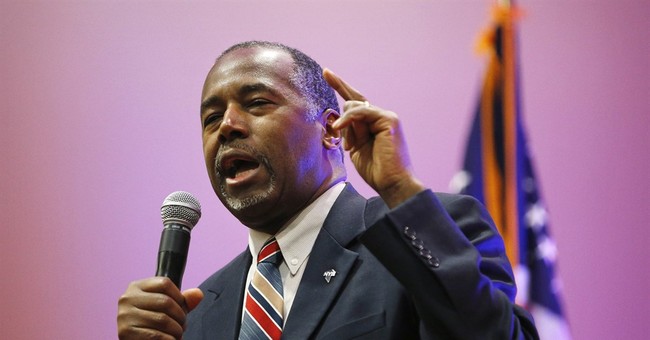 A little over a year ago, when Ben Carson was gearing up to run for president, I questioned in this space whether he was ready for what lay ahead. We now have our answer: No.

Carson had a great number of things going for him: his amazing life story, charm, professional accomplishments, eloquence and courage. I had only one major concern: "While he speaks eloquently and passionately about the importance of doing homework in his own life and for children everywhere, it's not obvious he's taken those lessons to heart when it comes to politics."

It's now obvious that he hasn't.

In the weeks before the terrorist attacks in Paris, Carson was already having a rough time. In a development that defied satire, Donald Trump was attacking Carson's character, which is a bit like Carrot Top ridiculing Jerry Seinfeld's sense of humor.

But it was smart politics. The rationale for Carson's candidacy is based largely on biography and character. Take those away and what's left?

Not too much, unfortunately. Oh sure, grading on a human level, there's still a great deal to admire in Carson. But we're talking presidential politics, not lifetime achievement awards.

In Miami, he was asked about the so-called wet-foot, dry-foot immigration policy for Cuban refugees. "You're going to have to explain to me exactly what you mean by that," he replied.

In a GOP debate, he said that the Chinese were involved in the Syrian civil war, alongside the Russians and the Iranians. His campaign had to awkwardly walk back the claim.

The New York Times even found two of his advisers to state on the record that Carson was struggling to get up to speed on foreign policy.

These and other flubs aren't necessarily disqualifying on their own. But after the terrorist attacks in Paris and Mali, not to mention the de facto declaration of martial law in Brussels, Carson's soft-spoken ad-libbing about foreign policy doesn't play nearly as well.

That kind of answer doesn't cut it when Americans feel threatened. That's why he's been sliding in a number of polls since the Paris attacks.

In fairness, Trump's answers shouldn't cut it either. But Carson is admiringly honest about his shortcomings and admits when he gets things wrong, while Trump makes up for his shortcomings and ignorance with bluster, bullying and bombast. Sadly, that continues to work for him.

Also, Carson's problems extend beyond foreign policy. He places an inordinate amount of emphasis on platitudes and cliches, particularly about common sense. I like common sense as much as the next guy, and we need more of it in Washington. But common sense isn't a leather-bound book one takes down from the shelf to find the right solutions to every problem. Presidents who think otherwise are begging to be rolled by the permanent bureaucracy. Nobody would want their brain surgeon to rely on common sense when removing a tumor.

Of course, politics isn't brain surgery. But it does require a certain foundation that only experience and homework can provide. If you're waiting until you run for president to get up to speed, it is too late. Wisconsin Gov. Scott Walker learned that the hard way this year. He simply wasn't prepared to discuss policies outside his comfort zone.

Carson's has been an all-too-familiar tale in GOP presidential politics in recent years. Sarah Palin, Herman Cain, former Texas Gov. Rick Perry (in 2008, not in 2012) -- all squandered opportunities by not being adequately prepared to leverage their popularity and potential.

The rarest commodity in politics is a genuinely charismatic personality that arouses passion in voters at a propitious political moment. Money can't buy that; just ask Mitt Romney. Doing your homework, meanwhile, is easy. I don't mean it doesn't require effort; it most certainly does. But there's no trick to it: Read books, talk to experts, think things through when you have the time and resources to do so.

If Carson had consulted common sense, he would have known that.