Estrangement from the Truth a Problem for Hillary 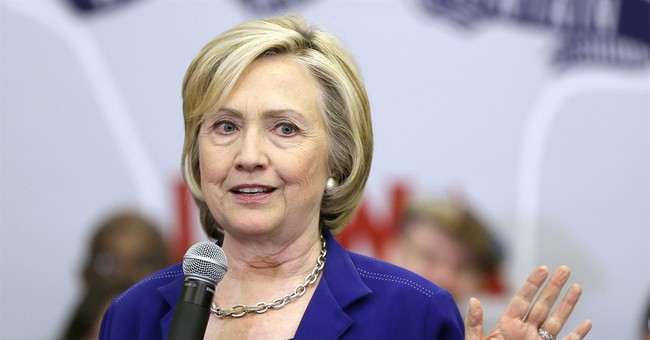 This is a widely acknowledged fact among people who pay attention and aren't on her payroll. Nearly 20 years ago, New York Times columnist William Safire wrote: "Americans of all political persuasions are coming to the sad realization that our first lady -- a woman of undoubted talents who was a role model for many in her generation -- is a congenital liar."

Younger folks probably have little to no memory of the lies Safire had in mind, though some might have heard about Hillary Clinton's infamously implausible explanation for how she managed to make a 10,000 percent profit in cattle futures simply by reading The Wall Street Journal.

Suffice it to say that she's been honing her craft for decades. And that's turning into a problem for her, perhaps her biggest problem.

After ducking the press for months, Clinton sat down for an interview with CNN's Brianna Keilar. It was a savvy choice. Keilar covers the Clinton campaign and has every incentive not to offend her famously vindictive sources 16 months before the election.

The most discussed deception came in an exchange about her emails. Clinton declared emphatically that, "You know, you're starting with so many assumptions that are -- I've never had a subpoena. ... Let's take a deep breath here."

Rep. Trey Gowdy (R-S.C.), chair of the committee investigating the Obama administration's response to the Benghazi attack, promptly produced a copy of the subpoena.

Team Clinton says she was responding to a specific allegation that she deleted emails that were under subpoena. It's a legalistically plausible defense given Keilar's muddled question and Stakhanovite effort to avoid asking meaningful follow-ups.

Still, it was a classically Clintonian way of lying: Make a sweeping, definitive-sounding statement, and then when called on it, release a fog of technicalities.

Of course, the greatest example of this tactic was her husband's parsing of the word "is" when called out for saying things like "there is no improper relationship" with a White House intern. Only under oath did he explain that it was technically true if you understand "is" to be a statement about the present moment, unlike "was."

The rest of the CNN interview was a farrago of misleading statements, blame-shifting and deceptions. Hillary insisted she had only used "one device" for email, when we now know that's not true. Perhaps under oath she would clarify that she meant "one device at a time."

She proclaimed that she broke no rules by using a personal server and other email chicanery. The Washington Post's Fact Checker column gave her "three Pinocchios" (out of a possible four) on those claims.

Clinton even flatly denied that voters distrust her when polls clearly show Americans don't, and -- as usual -- blamed all her problems on right-wing conspirators.

Reacting to the interview, Carl Bernstein, of Woodward and Bernstein fame, offered an odd analysis of Clinton's deceptions, conceding on CNN that Clinton has a "difficult relationship with the truth."

"We have to look at what politicians do generally in terms of fudging," Bernstein added. "It's endemic in the profession. She's become a kind of specialist at it."

He went on to explain that Clinton had to become a specialist because she's a victim of her husband's peccadilloes -- what Bernstein called the "peculiarity of the Clinton situation." Because Bill catted around, "She's been in a difficult position."

It was a strangely forgiving argument from a reporter who made his career by exposing presidential deceit. And while it's certainly true Bill put Hillary in some awkward predicaments, his philandering doesn't explain why she lied on issues ranging from her cattle futures windfall to her stealth server.

But Bernstein is right about one thing: Hillary is a specialist at lying. And that's a problem for her. Her husband was -- and is -- a prodigy at deceit, a renaissance man of lying. If football were a game of lies, he could play every position on offense and defense.

Mrs. Clinton, alas, is more like a veteran coach -- she's adept at telling others how to lie on her behalf. But she's not a natural liar herself, and it shows. At a time when the Democratic base craves authenticity (hence the mobs at Bernie Sanders rallies), Clinton seems utterly fabricated (hence her inability to get a capacity crowd at her announcement speech last month in New York City). Her best hope now would be to stop pandering to Sanders' fans and instead explain where she and Sanders differ on policy. But that would require a level of political authenticity she's forgotten how to fake convincingly.