Obama Coalition Isn't A Coupon That Hillary Can Redeem For Votes 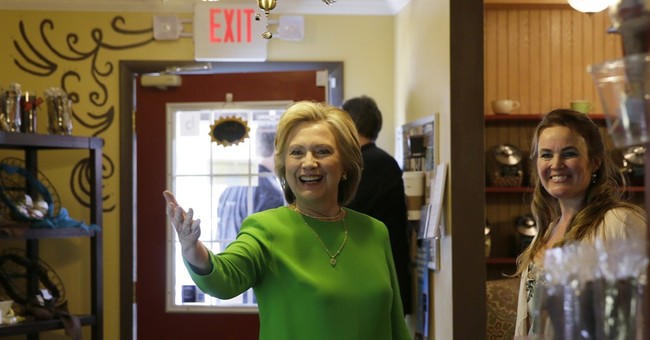 In news only slightly more surprising than this morning's sunrise, Hillary Rodham Clinton announced she is running for president again.

The announcement came in the form of a clever video in which Clinton says she wants to be a champion for "everyday Americans" -- an obviously focus-grouped term intended to replace "middle class." I like it, but unless they're very careful, "everyday" has a condescending tinge that could backfire (synonyms include: "dull," "unexceptional" and "commonplace"). One can already imagine a "Saturday Night Live" version of Clinton looking out the window of her private jet: "Wow, those everyday Americans look like ants down there."

According to most pundits, what made the video clever was that it put people first. The bulk of it is a montage of "everyday Americans" talking about exciting developments in their own lives: a woman re-entering the job market after being a stay-at-home mom; Latino brothers poised to start a business; a gay couple planning their wedding; an interracial couple excited about their move (and stopping their dog from eating garbage). It ends with Clinton saying, "I'm getting ready to do something too. I'm running for president."

The people profiled are a visual checklist of Barack Obama's "coalition of the ascendant" (Ron Brownstein's phrase): young people, minorities, gays, college-educated whites, single working women, etc. As with pretty much everything Clinton does, that was carefully planned.

Most political pros agree that Clinton will need a huge turnout from the Obama coalition to win. The bad news is that, so far, the Obama coalition is like a non-transferable, single-purpose coupon that can only be used to get Obama elected president. Clinton advocates insist we don't know that yet, which is true. But all the evidence looks bad for Clinton.

After he was re-elected, Obama turned his campaign operation, Organizing for America, into a de facto personal political party with the sole aim of mobilizing his coalition to support his agenda. In the wake of the Sandy Hook school shooting, the newly renamed Organizing for Action made gun control a priority. Obama arguably set the bar for political success low, demanding a congressional vote on his proposals -- not actual passage. He made this appeal the emotional centerpiece in his 2013 State of the Union address. Organizing for Action manned the phones, took to the Twitterverse, made a lot of noise on cable TV and ... nothing happened.

In every off-year and midterm election of his presidency, Obama tried very hard to rally his faithful for other candidates, including in the special election for the late Ted Kennedy's Senate seat. Obama failed, often spectacularly. After losing the Senate in 2014, Obama petulantly said he heard the voters but added: "To the two-thirds of voters who chose not to participate in the process yesterday, I hear you, too."

Whatever he meant by that, it was also an implicit concession that the Obama coalition isn't a proletarian reserve army that can be mobilized at will, even by Obama.

The Clinton campaign has hired many of Obama's consultants and gurus in the hopes that they can do for her what they allegedly did for him. They've even tried to replicate Obama's signature "O" logo into an exciting "H," which mostly looks like a road sign pointing to the next exit for a hospital.

The inelegance seems amusingly symbolic. The letter "O" lends itself to graphic artistry, the letter "H," not so much. It's no surprise that consultants think consultants are very important. But turning Clinton into Obama (or Bill Clinton) is beyond their powers.

In 2008, the enthusiasm for Obama's novel candidacy was self-evident and organic. The marketing guys helped, but they had a good product. Obama's personal appeal was such that his handlers felt he could never be overexposed.

Enthusiasm for Clinton's long-expected candidacy, while obviously sincere for many partisans, is more asserted than obvious. That's why the smartest thing about Clinton's announcement video wasn't the testimonials from so many "everyday Americans." It was that there was so little of Hillary Clinton in it.