Extended Voting Period Has Cranked up the Demagoguery 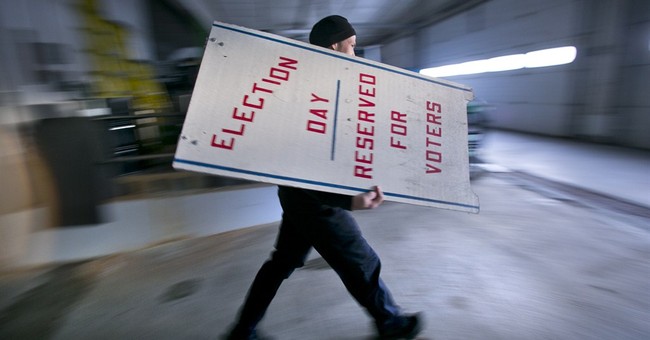 It used to be that the first Tuesday in November was Election Day, but now it is the last day of Election Month.

Election Month is bad, but it's a symptom of a deeper problem that makes the underlying problem worse. As George Orwell said, "A man may take to drink because he feels himself to be a failure, but then fail all the more completely because he drinks."

The deeper problem is that we simultaneously expect too much and too little of casting a ballot. See, for instance, actress Lena Dunham's "5 Reasons Why I Vote (and You Should Too)" on Planned Parenthood's website. Reason No. 1: "When you vote, you feel so, so good."

"You will have the best day just because you voted," she writes. "I wore fishnets and a little black dress to vote, then walked around with a spring in my slinky step. It lasted for days. I can summon it when I'm blue. It's more effective than exercise or ecstasy or cheesecake ..."

Of all the reasons one should vote, using ballots as a balm to cure low self-esteem has to be the most pathetic. But it is reason No. 5 that gets to the heart of the problem. Dunham writes that "voting is kind of a gateway drug to 'getting involved.'"

This is a widely held view and, as far as I can tell, there is absolutely no truth to it. But even if voting boosted civic participation, the very idea puts the cart before the horse. It is like saying you should buy a car because that way you might learn to drive, or saying take the test and then study for it later. Voting should come at the end of civic engagement, not at the beginning.

Of course, it's no wonder that politicians, activists and consultants are constantly shouting, "Fire! Aim! Ready!" They've taken to heart a consumer culture that sees closing the sale as the only important metric. The hosts of shopping network QVC don't care if you actually use the exercise equipment you buy, they just want you to believe that buying a Shake Weight will make you a better person long enough to process your credit card.

It's amusing to note that Dunham, who could also be seen dancing in her dingy underwear for a Rock the Vote video that encouraged young people to vote (and vote liberal) in Tuesday's

midterms, never actually voted in the previous midterm elections. At least when George Foreman appears in an infomercial, you can assume he's actually used his own grill.

Both political parties were determined to boost turnout among "low-propensity voters," a euphemism for people who don't care very much about politics. Naturally, this often means they also don't know very much about politics. As a result, the pros must tell them their votes matter more than they do. That's why the Georgia Democratic Party distributed fliers to black voters suggesting that a vote for the Republicans would somehow cause a replay of the shooting of Michael Brown in Ferguson, Missouri.

In Colorado, NARAL Pro-Choice America ran an ad insisting that a vote for the Republican candidate for the U.S. Senate would lead to a ban on women's birth control and, as a result, a critical condom shortage.

If you hadn't been paying attention, you might not have known that the Republican candidate, Rep. Cory Gardner, actually favored making birth control available over the counter. That's forgivable ignorance. But, if you think a single senator from a single state can ban birth control (never mind that he doesn't want to), then you are so staggeringly clueless about how our political system works, you shouldn't vote at all. Indeed, any self-esteem boost you might get from pulling a lever in a polling booth would be like a pebble in the ocean of shame you should feel for being so ignorant.

Now, it's entirely true that the practice of inflating the stakes of an election was old when Periclean Athens was young, but making it so much easier to vote -- over such a long period -- exacerbates the problem by giving campaigns a whole month for rolling, targeted demagoguery.

"Vote first, ask questions later" is not a mantra of good citizenship. It's a marketing strategy designed to reward politicians for voters' ignorance.