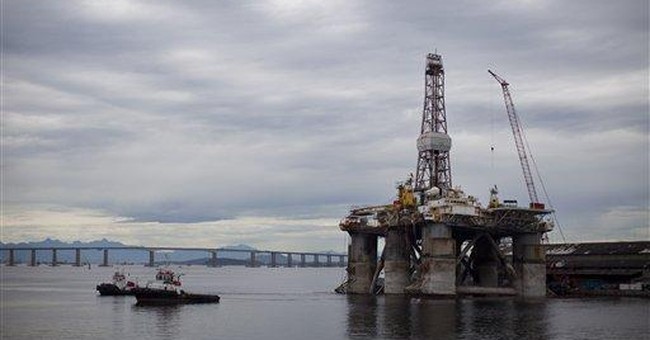 Never let it be said that Mother Nature doesn't appreciate irony. A new study led by researchers at Occidental College and the University of California at Santa Barbara has found that the oil platforms dotting the California coast are fantastic for sea life.

In a 15-year study, researchers found that the ecosystems that build up around artificial rigs host 1,000 percent more fish and other sea life than natural habitats such as reefs and estuaries. The California rigs outstripped even famously rich ecosystems such as the coral reefs of French Polynesia.

Now, as a big fan of artificial reefs, I think this is exciting news. There are many who oppose the idea of improving on God's -- or, if you prefer, Gaia's -- design. This strikes me as crazy, given the fact that virtually all of the food we eat and the clothes we wear are the products of human innovation. When humans ran out of gazelles or bison to hunt, they had the great idea of catching a few and raising a renewable supply. When picking wild seeds and berries no longer fed the tribe, it dawned on humans to plant their own.

Fish pose a special problem, however, because many species are difficult to farm. And even when fish are adaptable to aquaculture, there are special risks and costs involved. As a result, the oceans are still being overfished, thanks in no small part to the tragedy of the commons. (Since no one owns the ocean, fishing fleets often grab as much as they can.)

According to Jeremy Claisse, the lead author of the study, the reason rigs are particularly beneficial stems from the fact they're so tall. A skyscraper from seafloor to surface apparently lends itself to a very rich ecosystem. The fact that it's an oil rig is, of course, irrelevant.

Claisse says in interviews that he hopes policymakers will take his findings into account when approving renewable energy sources such as ocean-based wind farms. "These results show the potential importance of man-made structures in enhancing natural habitats," he told New Scientist, "and demonstrate that leaving them in place after use, if done right, can have benefits for the marine environment."

He's right. I would love to see stand-alone underwater skyscrapers anywhere they might work, but especially along the African coastline, where fishing is essential and overfishing a major problem.

But let's get back to the ironic part. In 1992, world leaders convened in Rio de Janeiro to discuss three issues: climate change, desertification and biodiversity. Since then, the world has dedicated untold billions of dollars to fighting climate change. Even the rosiest accounts of what has been accomplished so far concede that little progress has been made in terms of forestalling the alleged climate apocalypse a century or so from now.

However, the effort has other achievements under its belt. The global war on carbon has allowed politicians, activists and voters to congratulate themselves about their concern for the environment, while at the same time distracting them from the other goal of that Earth Summit: saving endangered species.

If only lobbyists and subsidy-grubbing corporations could make as much money fighting the eradication of the African elephant, the Asian tiger or countless other creatures.

Since the first Earth Day in 1970, the global wildlife population has been cut in half, according to the World Wildlife Fund. While there are many heroic organizations dedicated to saving endangered species, who can dispute that fossil fuel phobia dominates the conversation and sucks up most of the passion?

The environmental jihad against oil predates hysteria about global warming by decades. Oil was an enemy back when people were still fretting over the looming ice age. Indeed, many say it began with the Santa Barbara oil spill of 1969.

I don't know if the oil rigs off the Santa Barbara coast today have saved any endangered species, but I do know that the wind and solar farms of the California desert are killing and threatening birds -- including endangered ones -- at an alarming rate (and not just birds). Not even the Endangered Species Act and the Migratory Bird Treaty Act can stand in the way of the obsession with climate change.

What good will a cooler planet do us if we're the only ones around to enjoy it?