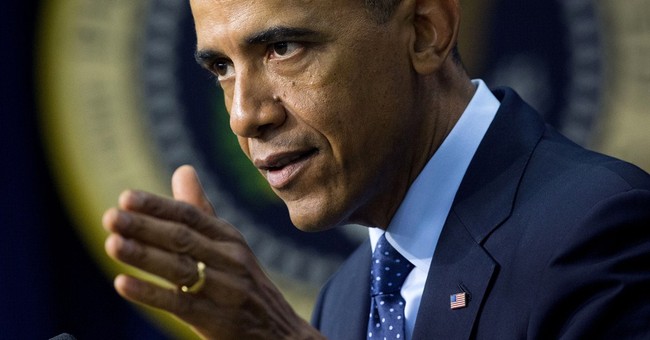 It's funny how President Obama is always talking about "I" and "me" whenever it makes him look good, but suddenly it's "they" and "we" when mistakes are made..

For instance, for years Obama boasted about how he ended the Iraq war and how he withdrew American troops. "You know I say what I mean and I mean what I say," he boasted on the campaign trail in 2012. "I said I'd end the war in Iraq. I ended it."

Then, over the summer, as one Iraqi city after another fell to Islamic State militants, and as critics insisted that Obama's decision to pull all of our troops out of Iraq was partly to blame, he suddenly changed his tune, mocking the critics. "What I just find interesting is the degree to which this issue keeps on coming up, as if this was my decision [to withdraw U.S. troops]."

On Sunday night, the always-congenial Steve Kroft of CBS's "60 Minutes" noted comments by James Clapper, the director of national intelligence. Clapper said, "We overestimated the ability and the will of our allies, the Iraqi army, to fight." "That's true. That's absolutely true," Obama replied. "Jim Clapper has acknowledged that I think they underestimated what had been taking place in Syria."

Eli Lake of the Daily Beast contacted a "former senior Pentagon official who worked closely on the threat posed by Sunni jihadists in Syria and Iraq," who was, in Lake's words, "flabbergasted" by the president's remarks. "Either the president doesn't read the intelligence he's getting or he's bulls--ing," the official said.

It's almost surely the latter. Lake and others have gone on to detail how the intelligence and defense communities were briefing the White House and Congress about the threat even when Obama was still dismissing Islamic State as the "jayvee squad" of terrorism.

But while it would be nice to hear the president say, "I blew it," such admissions are probably too much to expect from any politician, never mind Obama. What matters aren't words, but deeds.

And after much reluctance the president has been changing course. He may not speak forthrightly about the fact that he's putting boots on the ground, but he's putting boots on the ground. He may struggle to call it a war, but he's waging war on the Islamic State. He may need to rebrand a core al-Qaeda cell "the Khorasan Group" in order to sidestep embarrassing questions about his vows of success against "core al-Qaeda," but he did bomb the Khorasan Group.

Still, there's one area where he is sticking to his ideological guns. And that is defense spending. He has conveniently adopted a three-year strategy that will drop this problem in the lap of the next president.

Maybe three years makes sense, but does it make sense to hamstring the next commander in chief?

The Syrian phase of this war began with the launching of Tomahawk missiles from Navy ships. Those missiles cost $1.4 million apiece, but they're more precious than that because Obama has slashed the Navy's Tomahawk budget to 100 a year. We launched nearly 50 on the first day of the attack on Syria alone. That same night, F-22s were used to attack Islamic State and the Khorasan Group. But Obama has called the plane an "outdated" "waste" of American tax dollars. We plan to mothball the A-10 Warthog, which was essential in both Iraq wars. We are cutting Army troop levels to the lowest since before World War II. The Navy's fleet is smaller than it has been since before WWI, with half the cruiser fleet being "placed in storage." And on and on.

In his "60 Minutes" interview, Obama explained why the lion's share of the burden in this fight falls to us. "That's always the case," he said. "America leads. We are the indispensable nation. We have capacity no one else has. Our military is the best in the history of the world. And when trouble comes up anywhere in the world, they don't call Beijing. They don't call Moscow. They call us. That's the deal."