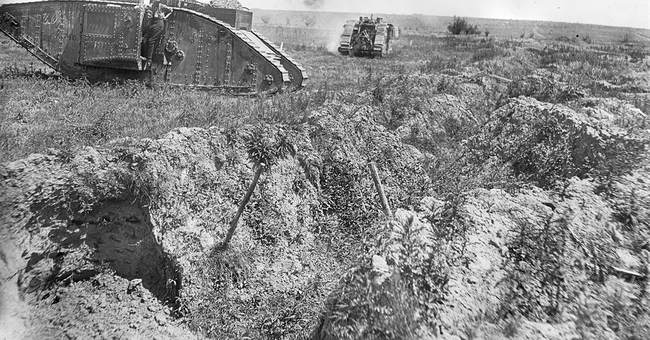 For most Americans, the war is like algebra or frog anatomy -- something you have to study briefly in school but then never have to think about again. Unlike World War II, with its unambiguous villains, epic battles and clear victory, World War I is a hot mess. Countries and forgotten empires declared war on each other in no small part because a bunch of aristocrats in funny clothes said they had to.

Everything about World War I -- from the seemingly ridiculous fighting techniques (who hasn't watched a movie with trench warfare and thought, "Man, that's a dumb way to die"?) to the clothes and music -- seems anciently irrelevant.

But the truth is that almost no modern event can hold a candle to it. George Kennan observed that when studying the maladies of the 20th century, "all the lines of inquiry lead back to World War I." A century from now, people might say the same thing of the past two centuries.

Let's start with the obvious. The staggering loss of military lives: 650,000 Italians, 325,000 Turks, nearly a million from the British empire, over a million from Austro-Hungarian lands, 1.4 million from France, 1.7 million Russians, 1.8 million Germans and 116,516 Americans -- not to mention 8.9 million civilian casualties worldwide. None of that counts the 50 million fatalities resulting from the influenza pandemic largely unleashed by the war.

Without World War I, you don't get the second -- a poignant irony given that the former was sold as the "war to end all wars." The terms imposed on Germany, described as a "Carthaginian peace" by John Maynard Keynes, made another war virtually inevitable. Much as Adolf Hitler found his life's mission while fighting in World War I. Benito Mussolini's fascism was a direct adaptation of what he called "the socialism of the trenches."

Without the first war, the Bolsheviks almost surely would never have come to power in Russia. That led to the Soviet Union's mass murder, Eastern Europe's enslavement, the Cold War and, of course, Vladimir Putin's career.

The Middle East's travails can be traced in no small part to the Ottoman Empire's dissolution at the end of WWI. Dividing their spoils, the British and French drew most of the contours of the Arab world to their benefit. According to a surely false legend, the line between Jordan and Saudi Arabia takes a crooked turn because someone bumped Winston Churchill's elbow while he was drawing it. (Churchill himself blamed his errant pen on a liquid lunch.) What's not disputed is that the resulting maps have fed countless conflicts and resentments ever since.

In the West, the war opened a Pandora's box, unleashing innumerable cultural and intellectual demons that we have decided to make peace with rather than defeat.

And then there's America. Some good was hastened by the war, though it's hard to believe women's suffrage wasn't inevitable. But it's also hard to ignore the harm, at least from a libertarian perspective.

"I believe it is no exaggeration," wrote sociologist Robert Nisbet, "to say that the West's first real experience with totalitarianism -- political absolutism extended into every possible area of culture and society, education, religion, industry, the arts, local community and family included, with a kind of terror always waiting in the wings -- came with the American war state under Woodrow Wilson."

Wilson introduced domestic spying, censorship, violent political intimidation of opponents and economic statism into the American DNA. Pro-Wilson intellectuals celebrated the "social possibilities of war," in the words of John Dewey. By that they meant the ability to force Americans to, as Frederick Lewis Allen put it, "lay by our good-natured individualism and march in step." The enduring notion that experts could plan the economy from Washington was largely born in Wilson's "war socialism."

David Adesnik, my colleague at the American Enterprise Institute, has an essay in The Weekly Standard arguing America had no choice but to join World War I because Germany had resolved to fight us. Maybe so, but America joined that stupid and calamitous war very late in the game and by doing so abetted the Carthaginian peace. The correctness of that choice is an academic question. The consequences of it remain very much alive.