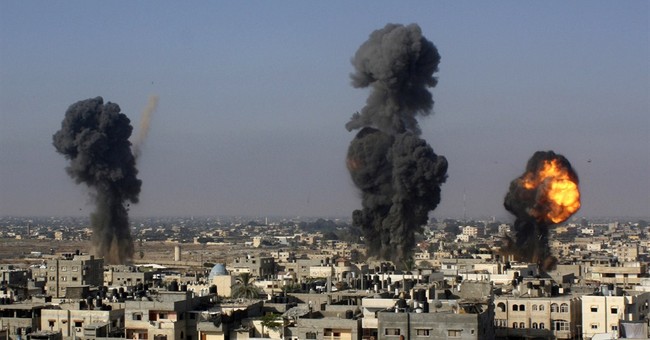 "Here's the difference between us," Israeli Prime Minister Benjamin Netanyahu explained on "Fox News Sunday." "We're using missile defense to protect our civilians, and they're using their civilians to protect their missiles."

It's a classic talking point. It's also objectively true, and that truth is very frustrating for Israel's critics.

All one needs to do is delve into the muck of Twitter and read the timelines for such hashtags as #GazaUnderAttack and #GenocideInGaza: "They're killing the women and children to ensure there won't be a new generation of Palestine." "One Holocaust can NEVER justify another."

And let's not even talk about the globally trending hashtag #HitlerWasRight.

Of course it's not just on Twitter. Mahmoud Abbas, the head of the feckless Palestinian Authority, recently condemned Israel for committing "genocide" in Gaza. For decades, political cartoonists and cartoonish politicians have been jaw-jawing about how Israel now wears the SS uniform.

This too is basically a talking point -- and a very old one. But this one is plainly a lie.

If the Israelis are, or have ever been, interested in genocide, they are utterly incompetent at it. As slanders go, it's almost funny, like the old paranoid delusion that George W. Bush was simultaneously an idiot and a criminal mastermind.

On the one hand, the Israeli military is supposed to be ruthlessly competent and determined to wipe out the Palestinians. On the other, the Palestinian population has grown more than 100 percent since 1970. The population in the Gaza Strip has grown nearly threefold since 1990. The Palestinians themselves expect the population to double over the next two decades. "Genocide" is a loaded political term, but under any remotely reasonable definition, shouldn't those numbers be going the other way?

It's just a hunch, but if the Israelis wanted to wipe out as many Palestinians as possible, never mind commit genocide, they probably wouldn't issue warnings to Gazans (by phone and leaflet) to get out of harm's way. Nor would Israel continue to allow hundreds of trucks of food and medical aid to enter Gaza even as hundreds of rockets leave Gaza.

And if Hamas were chiefly concerned with protecting Palestinian lives, it would not implore Gazans to stay in their homes -- serving as human shields and inflating the body count as a propaganda prop to increase international pressure on Israel.

One perverse complaint, often subtly echoed in the mainstream media, is that it is somehow unfair that Israelis are not dying, so far, from Gaza rocket strikes. The Israelis have the Iron Dome defense system, which intercepts the rockets aimed at civilians. They also have bomb shelters; the Palestinians do not. They have these things because, as Netanyahu said, Israelis are interested in protecting their citizens.

As Commentary's Jonathan Tobin notes, no one is asking why the Palestinians don't have bomb shelters. The assumption seems to be that the Gazans don't have the wherewithal to build them. This is untrue because they do have bomb shelters -- they just reserve them for Hamas' leaders and fighters. Indeed, Hamas has dug thousands of tunnels under Gaza, largely so it can smuggle in, and store, more rockets to fire on Israel. Better that those tunnels were used as shelters for civilians, but that would mean not letting them die for the greater "good."

Of course, not being as bad as the Nazis is a very low bar. And the fact that Israel clears it like a pole-vaulter leaping over a brick is not the same as saying Israel is without fault. But Israel's shortcomings stem largely from the fact it is trying to deal with "peace partners" openly uninterested in lasting peace. Solving that problem is hard. So hard that some would rather shout "Nazi!" at Jews.

It's a moral scandal that it's even necessary to bring up this inconvenient truth. But it is necessary because even many of the people who would never say "Hitler was right" have nonetheless internalized another lesson from the Nazis. It was Joseph Goebbels who said, "If you tell a lie big enough and keep repeating it, people will eventually come to believe it."