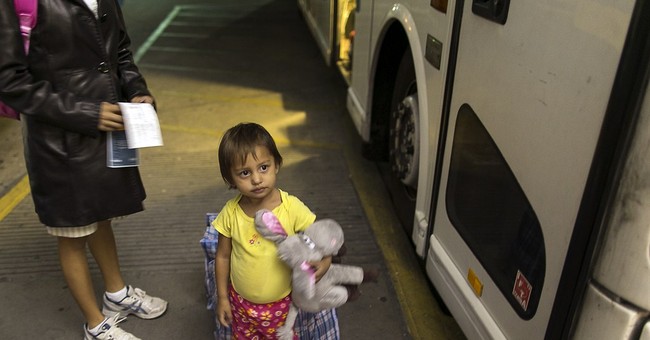 All you need to do is look at the headlines out of Central America to see why tens of thousands of children are ending up at our border.

No wonder we have so many refugees at our door.

Except there's one hitch: All of these headlines are very old. The first is from 1987, the last from 2007. And yet, over those two decades, we never saw anything like what we are seeing today.

President Obama has gotten a lot of grief from his base for being the "deporter-in-chief." But the basis for this charge is rooted in some statistical sleight of hand that he uses on the stump to show that he's tough on illegal immigration. President Obama likes to claim that he's deported a lot of people. But he hasn't. What he's done is count people caught and turned around at the border as "deportations." If previous administrations had counted thwarted illegal immigrants that way, Obama's number of "deportations" from the border would likely still be much lower than other recent presidents. Meanwhile, as the Los Angeles Times reported in April, "expulsions of people who are settled and working in the United States have fallen steadily since his first year in office, and are down more than 40 percent since 2009."

"If you are a run-of-the-mill immigrant here illegally, your odds of getting deported are close to zero -- it's just highly unlikely to happen," John Sandweg, the former acting head of Immigrations and Customs Enforcement (ICE) told the Times.

Obama has been even more generous to the kids of illegal immigrants, sometimes called "dreamers." He unilaterally -- and some would say illegally -- granted permanent resident status to any kids who've been living here a while and who came here under the age of 16. The same president who denounces his opponents for "playing politics" made that decision during an election year.

That's not to say that those kids don't deserve our sympathy or help. But the fact remains those decisions had consequences this administration was utterly unprepared to deal with.

Note: Failure to prepare is not synonymous with being surprised. Last year Border Patrol agents reported that 38,000 kids showed up at the border. Indeed, as of January, the administration expected that number to rise to 65,000.

Some of my friends on the right think the border crisis is some grand political scheme of Obama's, that he in effect wants a border crisis. I think that's wrong. Buffeted by scandals and the growing realization by large swaths of the public that he is out of his depth, the last thing he needed was this tragic spectacle on the border.

But that doesn't mean this isn't a crisis of his making, triggered by his tendency to think politics first and policy second. In economic terms, he thought he could lower the price of a very valuable good -- legal residence in the U.S. -- without seeing any rise in the demand. These immigrants aren't fools. They're responding rationally to new information; if you make it past the border, you can stay. If you're a kid, all you have to do is make it to the border.

That's why conservatives are wrong when they suggest more border guards will solve this crisis. The kids are turning themselves into the border guards. Adding more guards is like adding more staff to the reception desk at a hotel.

The president's defenders would have us believe this is all a consequence of an anti-sex trafficking law passed by the Democrat-controlled Congress and signed by George W. Bush in 2008. And it's true that the Wilberforce Act makes it more difficult to turn the buses around.

But the law didn't cause the crisis, nor did violence in Central America. The cause comes from a president who puts politics first.