A Questionable Game of 'Shut Up' on Iraq 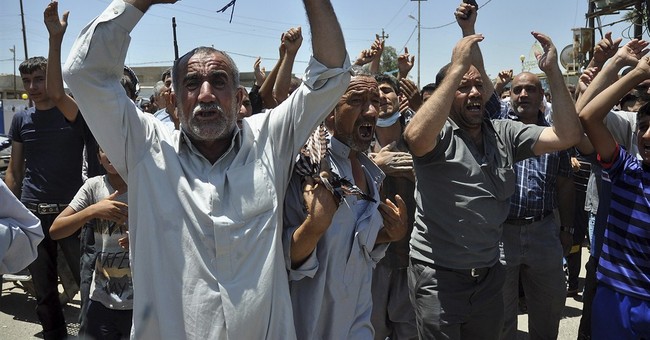 It's a fact of human nature that it's easier to talk about who's to blame for a problem than it is to figure out what to do about the problem.

Case in point: There's a near-riot in liberal circles over the very idea that supporters of the Iraq War should even be allowed to criticize the president's handling of the current Middle East crisis, never mind offer advice on how to proceed.

The Atlantic's James Fallows says Dick Cheney and company "have earned the right not to be listened to." Slate magazine's Jamelle Bouie says that prominent public intellectuals and journalists who supported the Iraq war should "be barred from public comment." Charles Pierce at Esquire is less subtle: "Shut up, all of you. Go away."

Some go even further. Katrina vanden Heuvel asks in the Washington Post: "Can someone explain to me why the media still solicit advice about the crisis in Iraq from Sen. John McCain (R-Ariz.)? Or Sen. Lindsey Graham (R-S.C.)?" (One possible answer: They are newsmakers, holding prominent positions on pertinent Senate committees.)

I'm always curious what agency in a free society is in charge of enforcing prohibitions on such things.

Given the tendency for nearly everyone to get things wrong over time, this is a dangerous game. Vanden Heuvel has been wrong about so many things, it's difficult to know where to begin. She opposed pretty much the warp and woof of America's Cold War policies. She opposed Bill Clinton's war in the Balkans. She opposed the Persian Gulf War.

Fallows made a name for himself in the 1980s and '90s championing the notion that Japan Inc. would overtake the United States. Shall we stop listening to him on economic issues?

And there are all of the Democratic politicians who supported the Iraq war, only to condemn it when the politics went south on them. Shall we ignore President Obama's vice president, not to mention his current and former secretaries of State? What of Susan Rice? She was a vocal supporter of the war in 2003. And she's now national security advisor, advising Obama as we speak.

Moreover, most of the "shut up!" chorus, not to mention Obama, were all opposed to the "surge," arguing that it couldn't work. It did, saving America from a humiliating defeat.

My point here isn't simply to offer a tu quoque argument (rough translation: "You do it too, nyah nyah!"). In truth, I hardly blame opponents of the war for their umbrage. I supported the war, and I still think the arguments in favor at the time were superior to the arguments against. Alas, the facts on the ground didn't care about the arguments.

I long ago conceded that the war was a mistake, but I also didn't think it had to stay one. The future has the ability to change the past. If postwar Iraq grew into a stable, confident nation progressing toward a lawful, decent society, I've argued, then someday in the future the mistake might look like a success.

What so offended me about Obama's approach to postwar Iraq is that he cared almost solely about the postwar part and very little about the Iraq part. He was so determined to fulfill his promise to end the war that he didn't put much thought into what would happen after we got out. That has all but guaranteed the war will remain a mistake.

If someone has a dagger in his chest, the solution isn't necessarily to pull out the dagger immediately. Obama barely tried to negotiate a mutually acceptable status of forces agreement with Iraq, which would have kept U.S. troops there. He even included a poison pill requirement -- that the Iraqi parliament ratify any such agreement -- all but guaranteeing that he could blame the impasse on the Iraqis.

Hillary Clinton recently defined leadership in a democracy as a relay race: "You run the best race you can run; you hand off the baton." Obama was handed a baton he didn't want, so he dropped it.

As a result, he's now being forced to pick it up. I can only hope he does a good job.