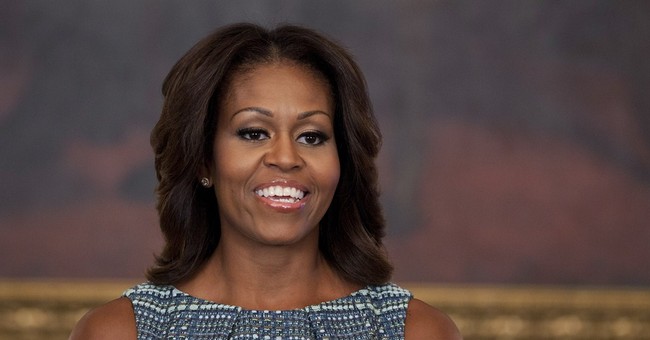 Michelle Obama wants you to drink more water, at least one more glass a day. Frankly, I think it's great. Sure, the science behind some of her claims is somewhere between iffy and debatable. If you're not dehydrated, drinking more water won't give you more energy or cure your headaches, as her office vaguely claims. But it might take up belly space that otherwise would have gone to grape soda, Red Bull or some other sugary concoction.

Team Michelle won't admit this is the real agenda, insisting this is just a healthy, helpful reminder from the first lady. "Water is so basic," she explained from Watertown, Wis., "and because it is so plentiful, sometimes we just forget about it amid all the ads we watch on television and all the messages we receive every day about what to eat and drink. The truth is, water just gets drowned out."

Except that's not really true. According to Beverage Tracker (you don't subscribe?), in 1998, soda was our No. 1 drink of choice, with Americans consuming 54 gallons of the stuff every year. Today, it's down to 44 gallons, while water consumption has hit 58 gallons and rising.

Although on one level it may seem as if Obama is breaking the corporate grip on our drinking habits by celebrating the original no-frills beverage, it's more like she's pulling a Ferris Bueller: jumping in front of a parade in progress and acting as if it were for her all along. There's nothing more mainstream than going with the flow.

We tend to talk about culture as if it's something produced solely by obvious outlets like Hollywood or publishing. But the trend toward bottled water (which accounts for 21 of those 58 gallons a year Americans consume) is every bit as real a cultural phenomenon as Miley Cyrus' twerking -- even more so. Whenever we talk about ancient Greek or Egyptian culture, we spend an awful lot of time talking about what they drank and ate, we study their pots and pans, and we even write the occasional ode to their urns. There was no popular demand to see Cyrus behave like a bonobo in heat. There's a very real demand to drink pure water instead of other beverages.

We crossed a milestone in 2006 when, according to the U.S. Census, Americans started drinking more bottled water than beer. Susan McWilliams, a brilliant (liberal) political scientist, lamented this turning point in American culture. "There's a reason that beer commercials tend to include lots of people hanging out in a room together," she writes, "and bottled water commercials tend to include lone individuals climbing things and running around by themselves, usually on a beach at sunrise -- even though they are not being chased."

Bottled water is the beverage for an atomized generation that listens to music in a private headphone world. Beer is social. "Most people drink beer to lower social inhibitions," McWilliams notes, "to make it easier to have conversations with other people, to assuage loneliness, to grease the wheels for engaging in what my students euphemistically call 'relationships' -- in other words, to give a form and excuse for social life. You don't drink beer to improve your private, individual health."

This last point is one I can confirm after years of empirical testing.

Indeed, while every brand of bottled water has its own unique sales pitch, they all share one appeal: It's not common water.

Which raises one irony. Lots of socially engaged young people have started to rebel against bottled water on the grounds that all of that plastic is allegedly wasteful and deleterious to the environment. Some will even note that bottled water is an indictment of the public water system, the same way FedEx and UPS reflect poorly on the U.S. Postal Service. In other words, drinking Fiji water is a kind of lifestyle luxury most associated with elite culture -- like eating kale salads and having a home gym. It is of a piece with Michael Bloomberg's notorious efforts to make poor people live the way rich people think they should.

That doesn't make Obama's efforts misguided, but it's worth pointing out that even -- or perhaps especially -- liberals have a noblesse oblige all their own.