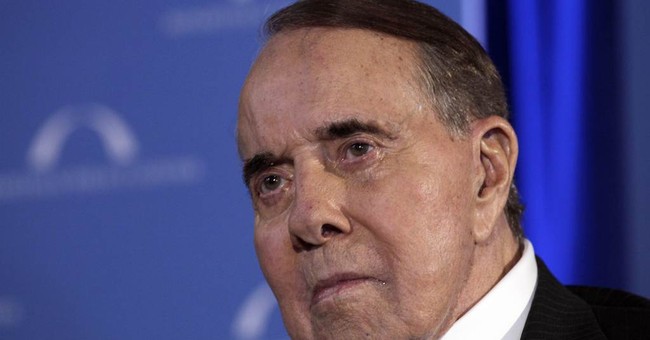 Let me state up front that I have incredible respect and admiration for Dole. He's an American hero and was a politician of undisputed integrity.

I also admire Chris Wallace as an insightful and accomplished journalist.

But it is a silly question and an absolutely ridiculous answer.

I don't blame Wallace for asking it, I guess, because every time a major Republican says Reagan couldn't get nominated today, it gets enormous play. When Jeb Bush said something to that effect last summer, it ignited a minor firestorm.

This time around, the sirens went off at the New York Times the moment Dole uttered his remarks. Members of the Times' editorial board sprang from their beds like firefighters, putting on their boots midstride as they raced for the newsroom to bang out an op-ed titled "The Wisdom of Bob Dole."

It was arguably their most predictable editorial ever -- or at least since the Times' endorsement(s) of Barack Obama, or their endorsements of John Kerry, Al Gore, Bill Clinton (twice), Michael Dukakis, Walter Mondale, Jimmy Carter (twice), George McGovern, Hubert Humphrey, Lyndon Johnson and John F. Kennedy. Clearly, when the Times frets that the Republican Party is dangerously "abandoning its past," you know it has the best interests of the GOP at heart.

Never mind that the Times didn't have much use for Dole and viewed Reagan's takeover of the White House as tantamount to a barbarian invasion.

So why is it a ridiculous question? Well, first of all, it's not a literal question but a figurative one. After all, if Reagan were alive today, he would be 102 years old.

Obviously, what Wallace meant is: "Would a politician with his positions make it in today's GOP?"

But this, too, has more poetic license than people realize. After all, a candidate who kept insisting that we should roll back the Soviet Union wouldn't be greeted as a man of unbending principle, but as a loon. The Soviet Union is gone. The world has moved on. The issues have changed.

Even being generous on this point, the simple fact is that no former president of the United States would have an easy time getting elected today. Nixon wouldn't fare well today not because he had "ideas," as Dole ludicrously said, but because Nixon was a screaming liberal by today's standards. And I don't simply mean today's Republican standards. Nixon started the EPA. He implemented wage and price controls. He didn't just push affirmative action programs but racial quotas too.

As for the Democrats, which one, exactly, would have an easy time getting elected today? Forget about the repugnant sexual antics; John F. Kennedy was a foreign-policy hawk and tax cutter. Jimmy Carter? A haughty, born-again Christian Southerner? Sure, he'd sail through the Democratic primaries. Even Bill Clinton, despite his enormous popularity among Democrats today, probably couldn't get nominated if he ran as the Democrat he was in 1992.

No one knows how Nixon, Carter, Clinton or Reagan -- never mind FDR, Lincoln or Washington -- would change their views with the benefit of hindsight. It's a fun parlor game to guess. But that's all it is: a game.

Meanwhile, Republicans are subjected to a double standard. On one hand, they are vilified for being too inflexible, too hidebound. On the other hand, they're condemned for not holding the exact same positions other Republicans held 30 or even 60 years ago. (Obama loves to invoke Eisenhower's positions as if they prove GOP hypocrisy.) Which is it? Are they rigid, or changing too much?

Obama doesn't even hold the same positions he held five years ago. But his ever-changing views are proof of "pragmatism" and "evolution."

Maybe Republicans learned some lessons from the past? Reagan agreed to amnesty before enforcement on immigration and it proved a failure. He agreed to match tax hikes for spending cuts, and Democrats reneged on the cuts while pocketing the hikes. Today's GOP, right or wrong, changed its positions based on changed circumstances. My hunch -- and it's just a hunch -- is that Reagan would be pretty sympathetic to the Republican evolution.