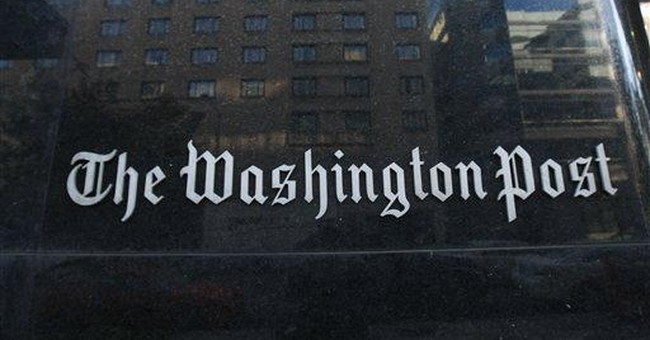 This may be one of the most unintentionally hilarious lines in recent memory. Jones, you may recall, left the White House when his background -- not just as an alleged 9/11 truther but as a self-confessed "Communist" and "revolutionary" -- became grist for the Fox News mill. Mainstream publications mostly ignored the controversy until after he was fired, and then focused on the fact that he directed an expletive at Republicans in a YouTube video.

Now Jones, with billets at Princeton and the Center for American Progress, casts himself as yet another victim, just like Shirley Sherrod, the Department of Agriculture employee fired after Andrew Breitbart released a misleadingly edited video of her. (Breitbart, a friend of mine, insists to me that he did not edit the video himself.)

You've just got to love a former member of STORM (Standing Together to Organize a Revolutionary Movement), a Mao-influenced organization with a professed "commitment to the fundamental principles of Marxism-Leninism," giving Walter Cronkite -- the dashboard saint of American bourgeois conformity -- his due as the bulwark of decency. Yes, yes, Jones says he's grown and is no longer the Red he was even a few years ago. But come on.

For generations, conservatives lamented the decline in standards. When Hollywood portrayed glandular instincts as the new moral compass of the secular age, conservatives waxed nostalgic over the lost decency of the "studio system." When the education industry shelved the great books in favor of hugs, conservatives lamented the demise of the three Rs and the "closing of the American mind." When the left became enamored with a "riot ideology" that mistook lawlessness for political protest, conservatives invoked "law and order." Name a front in the political and culture wars, and conservatives defended the authority of authority and the tradition of tradition, while liberals and leftists defended sticking it to the man.

But now that the legacy media is one of the last resources the left still has at its disposal, even Comrade Jones isn't immune to mossy nostalgia for Walter Cronkite (who, by the way, is easily one of the most overrated American icons).

And that's the irony: The left only believes in sticking it to the man when it isn't the man. Teachers unions and tenured professors, now that they control their guilds, are darn near reactionary in their white-knuckled grip on the status quo. Liberal legal scholars are a cargo cult to stare decisis, for the simple reason that the precedents are still on their side.

The essence of the culture war today is a battle over whose "gatekeepers" are legitimate and whose are not.

Nowhere is this more true than in the temples of journalism, where the high priests are barricading the doors with pews and candelabras to fend off the barbarians.

Among the liberal Brahmins of the legacy media, probity, standards and restraint are the order of the day for inconvenient news. Feeding frenzies are reserved for the fun news, i.e., the news that reinforces liberal assumptions.

So, when the Climategate e-mails were released, the New York Times' chief environmental correspondent refrained from posting private e-mails, a standard he would never have taken with internal e-mails from, say, BP. The leak of Valerie Plame's identity: a shocking scandal that tore at the heart of the Bush administration. The leaking of vital state secrets: great journalism.

The house Cronkite built did many fine and noble things. It also locked out competing points of view, buried inconvenient bodies, spun the news with centrifugal force and racked up a formidable list of Shirley Sherrods all its own. The New York Times whitewashed Stalin's genocide. Cronkite misreported the significance of the Tet Offensive to say the Vietnam War was unwinnable. Dan Rather, Cronkite's replacement, began his career falsely reporting that Dallas schoolchildren cheered JFK's murder and ended it falsely reporting on forged National Guard memos. The Rodney King video was misleadingly edited, the Tailwind story was not true. And that's only a snippet of the list.

The media environment today is dizzying not because of one revolution but two complimentary ones. First there's the churn of the Internet, from Wikileaks to wilding bloggers. But there's also a second revolution that amounts to consumer backlash against the House of Cronkite. It has fueled the rise of Fox News and the new alternative media.

This pincer movement can be scary. But it's progress.