Winner Take All on Health Care 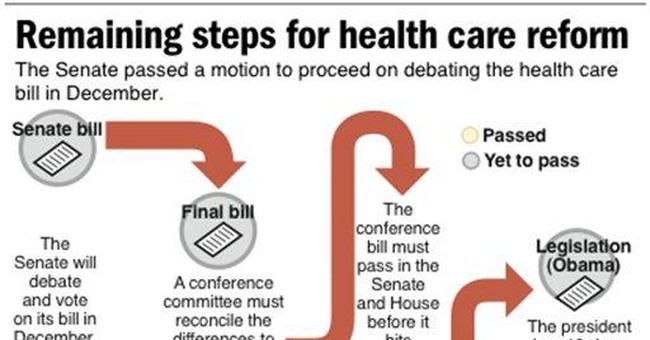 I hereby forfeit my claim to a right-wing conspiracy decoder ring by offering two cheers for the Democrats. I congratulate them on their victory Saturday night in the Senate, and while I can't quite wish them continued success on the course they are following, I'm beginning to make peace with the possibility that they'll win.

For years, conservatives and liberals have flirted with the idea of disposing of the fool's errand of bipartisanship. Seeking compromise with partisans across the aisle is a recipe for getting nothing important done.

For liberals, New York Times columnist Paul Krugman has been a leader of this school. In 2007, Krugman wrote in Slate magazine that progressives should abandon any pretense at working with Republicans. The "middle ground," he wrote, "doesn't exist -- and if Democrats try to find it, they'll squander a huge opportunity. Right now, the stars are aligned for a major change in America's direction. If the Democrats play nice, that opportunity may soon be gone."

"If one thing is clear from the stimulus debate," he wrote earlier this year, "it's that the two parties have utterly different economic doctrines." Krugman went on to describe the different views in his typically tendentious manner.

He's right on the basic point. While there are plenty of hackish, opportunistic deal makers in both parties, the core visions -- one progressive, the other conservative -- that animate the rank and file are increasingly, and fundamentally, irreconcilable.

Hence, the quest for the middle ground usually rewards the worst kinds of politicians -- those devoid of any core convictions and only concerned with feathering their own nests -- and yields the worst kinds of policies. Blending the two visions is like trying to marry two different recipes. You don't get the best of both so much as a huge mess -- say, peanut butter and caviar -- or a fraudulent meal, like a "vegetarian" cheesesteak. Better to stay pure, have your way and convince the American people that your way is the best way.

Now, the appeal of such an argument depends a great deal on your proximity to power. When your side is out of power, half a loaf is more appetizing than nothing. When in power, the thought of hogging the whole loaf for yourself instead of sharing is seductive.

I may be talking about team dynamics, but I don't mean that there's no difference between the teams. Far from it. The Democrats sincerely believe that nationalized health care, in one form or another, is the best thing for America and that if they can get it passed, voters will fall in love with it. Politically, there is a real danger they're right. Americans are loath to relinquish entitlements once they've secured them. That's the Republicans' gamble.

Then again, Democrats run the very serious risk that before the imagined joys of health care reform can be realized, voters will revolt over its tax hikes, massive Medicare cuts, increased bureaucracy and/or its budget-exploding costs. That's the Democrats' gamble.

Some moderate Democrats are making a side bet that they can vote for it out of solidarity and then run back to the center come the 2010 elections.

Well, I say let it ride. And just to make it more interesting, Republicans should promise to repeal "Obamacare" if they get a congressional majority in 2010. As National Review's Ramesh Ponnuru argues, that way moderate Democrats won't be able to run away from their votes come 2010. They'll be on notice that this will be the campaign issue of the election. And moderate Republicans will be on notice to resist the temptation to tinker with Obamacare rather than defenestrate it once it's passed.

Sure, I'd rather see this health care proposal die stillborn (and that's still quite possible). But if it passes, the upside is that Americans will finally be given a stark philosophical choice on a fundamental issue. That's much rarer than you might think (recall that the Iraq war and the bailouts were bipartisan affairs).

Obamacare is a vast, deeply polarizing demonstration project for progressive ideas. It is terrible policy, but because I think it's terrible policy, it may well result in a beneficial backlash. "Example is the school of mankind," proclaimed Edmund Burke, "and they will learn at no other."

Democrats insist they're pushing for health care reform against a political headwind because "history" compels them to. Republicans are standing athwart "history" yelling, "Stop!"

Politically, one side will be proved right, and the side proved wrong will pay a staggering price. Everyone's all in.