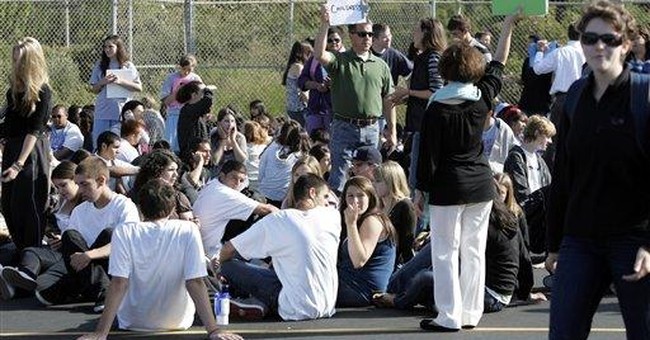 Brandi Scheiner believes she is a political prisoner. Held against her will in what is euphemistically dubbed a "rubber room," Scheiner, 56, likens her two-year captivity to being imprisoned at Guantanamo Bay. Alas, it's unlikely the Red Cross will hear her case.

She's a New York City public school teacher who, like about 600 fellow NYC teachers, has been removed from the classroom for alleged incompetence or other charges that include being drunk in the classroom or molesting students.

Scheiner, who makes more than $100,000 per year, nonetheless insists she is a prisoner of conscience forced to spend her workdays in the rubber room -- at full pay -- until the system can adjudicate her case. She cannot be fired, at least not without the school district spending gobs on legal fees, because she has tenure and her union, the United Federation of Teachers, would rather protect 1,000 lousy teachers than let one good teacher be fired unfairly.

So Scheiner and her rubber-roomies report for duty every school day and do nothing. They all get the usual vacations, including the entire summer off.

This is all according to Steven Brill in a blockbuster article in the Aug. 31 New Yorker about New York City's efforts to reform the public school system. Brill adds: "Because two percent of her salary is added to her pension for each year of seniority, a three-year stay in the Rubber Room will cost not only three hundred thousand dollars in salary but at least six thousand dollars a year in additional lifetime pension benefits."

Ever the martyr, Scheiner says she's "entitled to every penny of it."

She says that before New York Mayor Michael Bloomberg and schools chief Joel Klein came along, "everyone knew that an incompetent teacher would realize it and leave on their own."

That's not how the unions see it. A principal of a Queens public school told Brill that Randi Weingarten, president of the American Federation of Teachers, "would protect a dead body in the classroom. That's her job."

This is just a small illustration of a much larger mess. America's large school systems are a disaster.

Yes, this disaster has many authors. Schools are expected to fix larger social problems that are best dealt with by parents. Good teachers aren't paid nearly enough, and bad teachers are kept around, draining budgets. Education bureaucracies siphon off vast resources better spent on classrooms. For example, in 2007, the Washington, D.C., school district ranked third in overall spending among the 100 largest school districts in the nation (about $13,000 per student) but last in terms of money spent on teachers and instruction. More than half of every education dollar went to administrators.

President Obama might be a hypocritical liberal for sending his kids to private school, but he's a good parent for it.

But of all the myriad problems with public schools, the most identifiable and solvable is the ludicrous policy of tenure for teachers. University tenure is problematic enough, but at least there's a serious argument for giving professors the freedom to offer unpopular views. Tenure for kindergarten teachers is just crazy.

Tenure's defenders point to horror stories from half a century ago, as if getting rid of tenure would automatically subject teachers to political witch hunts and sexual discrimination. We now have civil rights laws and other employee protections.

Also, to listen to teachers unions, you'd think incompetent teachers are mythical creatures, less likely to be encountered than Bigfoot and unicorns. No wonder that from 1990 to 1999, the Los Angeles Unified School District, the second largest in the country with 30,000 tenured teachers, fired exactly one teacher.

The best argument for giving K-12 teachers tenure is that lifetime job security is a form of compensation for low pay. No doubt that's true, putting aside the fact that $100,000 a year with ample vacation is not exactly chattel slavery. And while most teachers don't make that much (the national average is about half that), the good ones could certainly make more if the dead weight were cleared away and rigid, seniority-based formulas were replaced with merit pay.

Oh, and kids would get better teachers.

Democratic politicians, mostly at the local level, are responsible for letting the unions protect their members at the expense of children and in exchange for campaign donations and other political support. And, to be fair, many Democrats (including Education Secretary Arne Duncan, Klein in New York and D.C.'s Michelle Rhee) are aware of the problem. What remains to be seen is whether they can do what needs to be done.