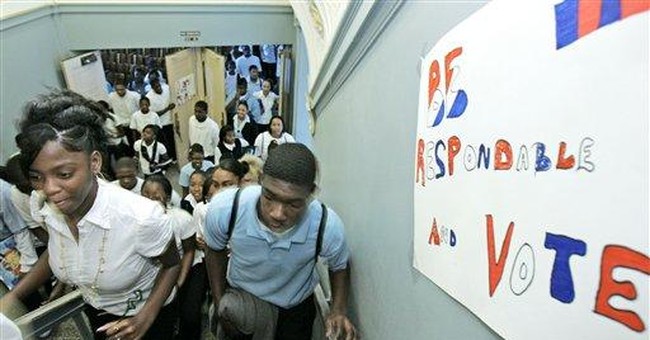 Hypocrisy is an overblown sin. Better to be a hypocrite who occasionally violates his principles than a villain who never does.

I bring this up because the usual, and entirely expected, round of conservative complaints about Barack Obama's public-schools hypocrisy has begun, and I'm finding it all a bit tedious.

The Obamas will send their two daughters to the expensive private school Sidwell Friends. Yes, that makes him something of a hypocrite because he is a vocal opponent of giving poor kids anything like the same option.

But you know what? Who cares? Personally, I would think less of the Obamas if they sent their kids to bad schools out of some ideological principle. Parents' first obligation is to do right by their own kids.

In Washington, we have these arguments every time a rich Democrat sends his kids to private schools, which is very often. The real issue is why the public schools are unacceptable to pretty much anyone, liberal or conservative, who has other options. Maybe in the rich suburbs of New York or Los Angeles, wealthy opponents of school choice run less risk of being labeled hypocrites; they can skip the pricey private schools because their public campuses aren't hellholes.

But most Washington public schools are hellholes. So parents here -- including the first family -- find hypocrisy a small price to pay for fulfilling their parental obligations.

According to data compiled by the Washington Post in 2007, of the 100 largest school districts in the country, D.C. ranks third in spending for each student, around $13,000 a pupil, but last in spending on instruction. More than half of every dollar of education spending goes to the salaries of administrators. Test scores are abysmal; the campuses are often unsafe.

Michelle Rhee, D.C.'s heroic school chancellor, in her 17 months on the job has already made meaningful improvements. But that's grading on an enormous curve. The Post recently reported that on observing a bad teacher in a classroom, Rhee complained to the principal. "Would you put your grandchild in that class?" she asked.

"If that's the standard," replied the defensive principal, "we don't have any effective teachers in my school."

So if Obama and other politicians don't want to send their kids to schools where even the principals have such views, that's no scandal. The scandal is that these politicians tolerate such awful schools at all. For anyone.

The main reason politicians adopt a policy of malign neglect: teachers unions, arguably the single worst mainstream institution in our country today. No group has a stronger or better-organized stranglehold on a political party than they do. No group is more committed to putting ideological blather and self-interest before the public good.

Rhee has been pushing a new contract that would provide merit pay to successful teachers. The system is voluntary: Individual teachers can stay in the current system that rewards mere seniority or opt to join a parallel system that pays for superior performance. Many talented teachers would love the opportunity.

Alas, the national teachers unions insist that linking pay to results is an outrageous attack on the integrity of public schools. They have insisted that D.C. teachers not even be allowed to vote on the contract.

The Democratic Party continues to tolerate this sort of thing because public school teachers continue to be reliably liberal voters. And their unions cut big checks.

Obama, however, bragged about being different during his campaign. He declared himself independent from teachers unions and boasted his support for Rhee. But his recent appointment of Stanford professor -- and teachers union apologist -- Linda Darling-Hammond to head his education transition team is seen by many as a sign that reformers like Rhee can expect little support from the new White House.

And where are the Republicans? Well, if you want a good example of why hypocrisy isn't the worst thing in the world, just look at the GOP. Because the party supports school-choice vouchers, it's simply out of the debate. School choice has much to recommend it. But it's no silver bullet, and vouchers will never gain full acceptance in rich suburbs.

School choice does immunize Republicans from the charge of hypocrisy, however. So rich Republicans can send their kids to ritzy private schools without fear of violating their principles. Good for them. Unfortunately, their principled insulation also makes them largely irrelevant to a debate in which people like Rhee could use all the help they can get.