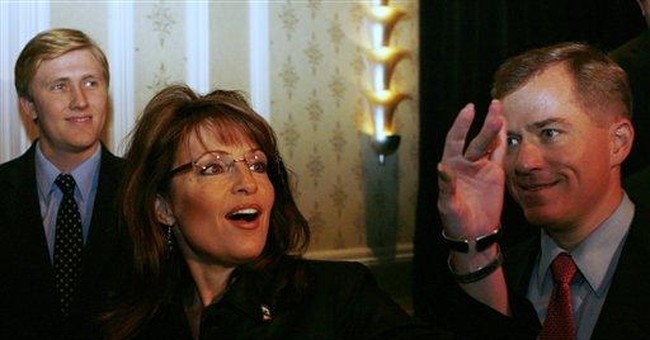 By now you've probably heard: The GOP is becoming too regional, too white, too old to compete at a national level. Democrats look like a merging of the cast of "Rent" and Up With People, while Republicans look like diehard fans of "Matlock" and "Murder, She Wrote."

Fine, fine. The GOP needs to win over more Hispanics, young people, suburban women. That sounds perfectly plausible. But what does "win over" mean?

To listen to many pundits and analysts, it means Republicans must become Democrats. The GOP has become too socially conservative, and if it wants to win the support of mainstream voters, it will need to become more socially liberal. To be "economically conservative but socially liberal" is the beginning of wisdom for this school of thought.

Or, put another way, if only the party could be more like former New Jersey Gov. and Bush EPA administrator Christine Todd Whitman, these voices have been saying for years, the GOP would truly become the majority party. Remember the Alan Alda character on NBC's blessedly defunct "West Wing"? We were told that his pro-choice stance on abortion would make the Republican Party vastly more competitive in places like California and New York.

The problem is that Alda's TV character is only marginally more fictional than Christine Todd Whitman. Economically conservative social liberals are the "jackalopes of American politics," in the words of National Review's Kate O'Beirne. The press keeps telling us they exist out there in huge numbers, but when you go looking for them, they refuse to emerge from the bushes.

In fairness, many people do describe themselves this way. Most of the time we simply call them "Democrats." Those who call themselves Republicans should more properly be called "confused."

This is not to say that one can't be a moderate on this issue or that and be a Republican. But the idea that social liberalism and economic conservatism can coexist easily is not well supported by the evidence. For example, in Congress and in state legislatures, the more pro-life you are, the more likely you are to be a free-market, low-tax conservative. The more pro-choice you are, the more likely it is that you will be remarkably generous with other people's money.

Former Sen. Phil Gramm, the best deregulator of the last 20 years, was adamantly pro-life. Sen. John Sununu, who just lost a brutal campaign in New Hampshire, is a champion of economic liberty and social conservatism. Even Ron Paul, the arch-libertarian congressman from Texas, almost surely would lose his seat if he weren't ardently pro-life.

One objection is that "economic conservatism" and "fiscal conservatism" are different things. One can be socially liberal and fiscally conservative, in the sense that you're only willing to constrain your statist do-goodery to the extent you're able to pay for it. This is certainly an intellectually defensible position.

But politically, this is hard ground to defend. It turns out that people who buy into the logic of social liberalism, not just on abortion but racial and other issues as well, usually find themselves ill-equipped ideologically to say no to additional spending on causes they care about. They even find it difficult to stay Republicans, as we can see from recent example Colin Powell, who endorsed Barack Obama for president for largely ethereal reasons.

It should be noted that it's also difficult to be fiscally conservative and socially conservative if you've jettisoned the conservative dogma of limited government. We saw this in spades as President Bush embraced "activist government" and ended up wildly increasing government spending over the last eight years.

And that should serve as a warning to those, on the right and left, who would like to see the GOP defenestrate millions of actual, living, breathing members of the party -- e.g., social conservatives -- in order to woo millions of largely nonexistent jackalopes. The GOP would simply cease to exist as a viable party without the support of social and religious conservatives. But not so the other way around. We've seen what happens in this country when the passionately religious abandon love for limited government and instead embrace social liberalism and government activism. The results have been good, as in the abolition movement. And the results have been more mixed, like during Prohibition and the Progressive Movement.