No One's Clean in This Mess 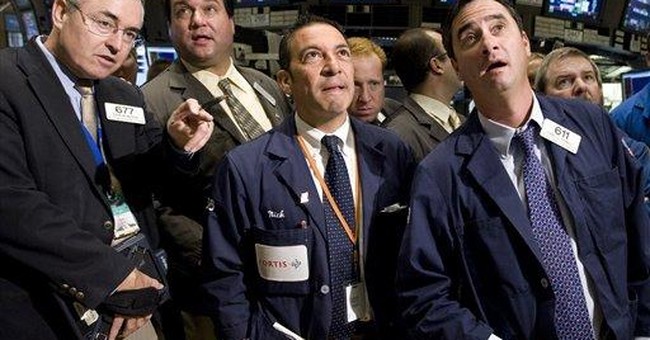 On Sunday evening, Republican House Minority Leader John A. Boehner explained his considered opinion on the $700 billion Wall Street bailout plan: It's a "crap sandwich," he said, but he was going to eat it.

Well, it turned out he couldn't shove it down his colleagues' throats. The bill failed on a bipartisan basis, but it was the Republicans who failed to deliver the votes they promised. Some complained that Democratic Speaker Nancy Pelosi drove them to switch their votes with her needlessly partisan floor speech on the subject. Of course Pelosi's needlessly partisan. This is news?

The Republican complaint is beyond childish. Democratic Rep. Barney Frank, a man saturated with guilt for this crisis, nonetheless was right to ridicule the GOP crybabies on Monday. "I'll make an offer," he said. "Give me (their) names and I will go talk uncharacteristically nicely to them and tell them what wonderful people they are and maybe they'll now think about the country."

Would that Frank had been imbued with such a spirit earlier. Frank, chairman of the House Financial Services Committee, has spent the last few years ridiculing Alan Greenspan, John McCain and others who sought more regulation for Fannie Mae's market-distorting schemes - the fons et origo of this financial crisis. Now he says "the private sector got us into this mess." His partner in crime, Senate Banking Committee Chairman Christopher Dodd (D-Conn.), a chief beneficiary of Fannie Mae lobbyists' largesse, claims this mess is the result of poor oversight - without even hinting at the fact he is in charge of oversight of banks. They sound like pimps complaining about the prevalence of STDs among prostitutes.

And let us not forget that House Democrats, with a 31-seat majority, could not get 95 of their own to vote for the bailout, largely because it didn't provide enough taxpayer money to their left-wing special interests. Would that they thought about the country.

The one man who truly tried to treat this crisis like a crisis - McCain - was ridiculed by Senate Majority Leader Harry Reid, who implored him to come to Washington to help in the first place. And the news media, which now treat any Republican action that threatens a Barack Obama victory as inherently dishonorable, uncritically accepted the bald Democratic lie that McCain ruined a bipartisan bailout deal last Friday.

This is not to say that McCain knows what to do. Faced with an unprecedented financial crisis involving frozen global credit markets and a maelstrom of moral hazard, his standard response is to talk about wiping out earmarks and eliminating waste, fraud and abuse. Memo to Mr. McCain: Waste, fraud and abuse are the only things holding the system together at this point.

Obama is no better. The man has spent two weeks irresponsibly excoriating his opponent for saying the fundamentals of the economy are strong - a perfectly leaderly thing for McCain to have said during a panic. Then, campaigning in Colorado on Monday, the day the Dow plunged 777.68 points, Obama proclaimed: "We've got the long-term fundamentals that will really make sure this economy grows."

Perhaps after al-Qaida seizes Baghdad, a President Obama would finally declare, "Hey, we can win this thing!"

Meanwhile, President Bush, his popularity ratings stuck at below-freezing numbers, has decided to cling to Treasury Secretary Hank Paulson for warmth on the grounds that the vaunted former Goldman Sachs CEO has the credibility to sell the solution to a problem he's been exacerbating for 18 months. When a reporter for Forbes magazine asked a Treasury spokesman last week why Congress had to lay out $700 billion, the answer came back: "It's not based on any particular data point. We just wanted to choose a really large number."

As for the reputedly free-market purists of the congressional GOP, with whom my sympathies generally lie, I cannot let pass without comment the fact that they controlled the legislative branch for most of the last eight years. Only now, when capitalism is in flames, does this fire brigade try to enforce the free-market fire codes without compromise.

I loathe populism. But if there ever has been a moment when reasonable men's hands itch for the pitchfork, this must surely be it. No one is blameless. No one is pure. Two decades of crapulence by the political class has been prologue to the era of coprophagy that is now upon us. It is crap sandwiches for as far as the eye can see.