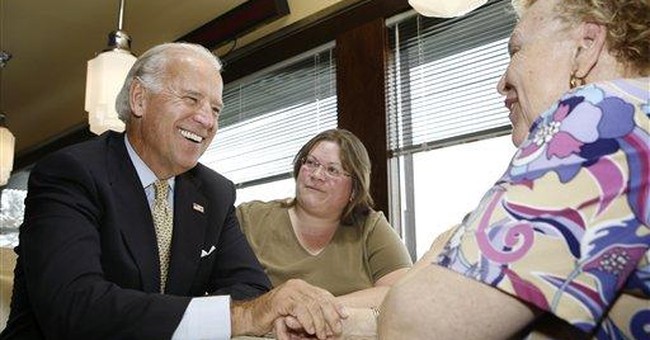 During the political conventions, we were swamped with a lot of punditry about stagecraft, statistics, polls and politics. We heard over and over again about appeals to this or that constituency.

Did that one satisfy small-business men? Did Joe Biden fix Barack Obama's problem with Catholics? Did Sarah Palin, the lipsticked pit bull, peel off Hillaryites from the Democratic fold? And who is speaking for the indispensable left-handed Samoans living on fixed incomes in the increasingly gay suburbs around Cleveland?

Well, here's a crazy thought: Maybe the Democrats and Republicans actually believe what they said and said what they believe. Perhaps the multiday infomercials put on in St. Paul and Denver should be seen for what the producers wanted them to be: a vision statement. And if that's the case, then the old saw about how there's not a dime's worth of difference between the two parties can only be true if we're talking about one really big dime. Perhaps the chief thematic difference between the two parties last week is this: One party is for losers and the other for winners. Now, I don't mean that Democrats are losers in the sense that they never got picked for softball, went to the prom with their favorite aunt or uncle, or any of that sort of thing. After all, the Democratic Party has almost cornered the market on the beautiful people and the hipsters. Heck, Rolling Stone has essentially become the house organ of the Democratic National Committee, and MTV serves as the Democrats' main youth outreach program. Rather, the Democrats cast themselves as the party for the losers in society, those who've been left behind, hurt, left homeless, literally or figuratively, by the gales of the supposedly cruel free market.

And, of course, that speaks well of them (whatever the merits of their policies may be). But after four nights of relentless hype about America's misery, the average viewer of the Democratic convention could be forgiven for thinking it was being held in Pyongyang, North Korea, instead of Denver. In the Democrats' America, it sounds as if we're all living off tree bark.

Vice presidential nominee Biden ad-libbed a line about how when he looked out the window of his Amtrak train at night, he could see the "flickering lights" of families huddled around their tables trying to figure out how to make ends meet. Apparently, the electric light bulb hasn't reached Delaware.

Meanwhile, the Republicans' message was aimed at winners. Again, I don't mean in the juvenile sense of popularity. Indeed, as much as both parties would like to blur the fact, many of the "losers" in today's economy are parts of the Republican coalition and certainly key voters for a John McCain victory (which is why McCain and Obama's speeches had so many similarities). The culturally conservative, working class, rural voters - the sorts of voters Obama says cling to guns and God - are feeling the pinch of the global economy more than perhaps any other demographic.

Even so, the GOP message on economics is one of Reaganite optimism. Obama lamented the effects of global trade, while McCain celebrated the prosperity that comes with opening markets. Even Mike Huckabee, who generally speaks for economically downscale Republicans, highlighted the difference: "I'm not a Republican because I grew up rich," he proclaimed, "I'm a Republican because I didn't want to spend the rest of my life poor, waiting for the government to rescue me."

Contrast that with Obama's lament that more Americans own cars "you can't afford to drive" and "credit card bills you can't afford to pay." He concedes that these problems "are not all of government's making" and then proceeds to explain why they are all largely the government's responsibility to solve. Hillary Clinton has admitted she ran for president "to stand up for all those who have been invisible to their government for eight long years." Suffice it to say, it is the dream of a great many Republicans to be invisible to their government. Consider the VP picks. Joe "the Scranton scrapper" Biden claims to speak for allegedly Dickensian working-class folks suffering by flickering lamplight. Sarah Palin's whole persona is that she is working class, but the last thing she looks like is a victim in need of government charity.

On national security issues, the winner-loser gap is even more stark. Speaker after speaker at the Democratic convention expressed "support" for the troops and promised to bring them home from Iraq. Left out was any sense that the troops might actually want to win, never mind have their recent victories celebrated. Instead, the impression left by the Democrats, from Michelle Obama on Monday to her husband on Thursday, was of a military cruelly exploited and manipulated and now desperately in need of "mental health care," in Mrs. Obama's words. No Republican would say returning troops deserve anything but the best, but for the GOP the troops are heroes in pursuit of victory, not dupes in search of a handout. Republican Sen. Lindsey Graham of South Carolina summed it up well: "Victory! You can say it at this convention. We are winning!"

Of course, none of this is really new. Franklin Roosevelt transformed American politics by recasting the relationship between the government and its people to that of caretaker and client, and the Democrats remain the party of Roosevelt. The challenge for the Democrats is that they've somehow lost their Rooseveltian optimism, to the point where they're the Downer Party.

The challenge for the Republicans is perhaps more acute: A majority of voters might think now is the time for the Downer Party.