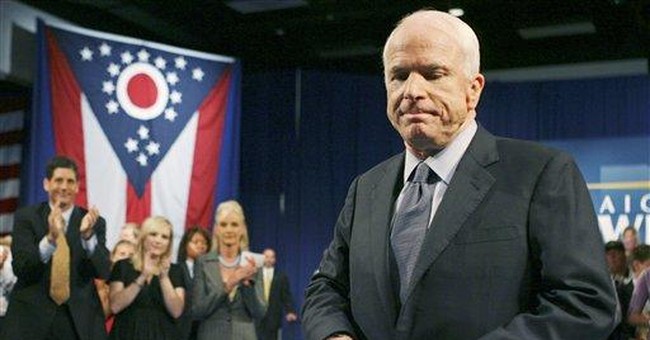 That's the question John McCain should be asking.

Next week marks the 102nd anniversary of newspaperman William Allen White's famous editorial "What's the Matter with Kansas," in which he flayed Kansans for their populist foolishness. Tongue firmly in cheek, he editorialized, "Whoop it up for the ragged trousers; put the lazy, greasy fizzle who can't pay his debts on the altar, and bow down and worship him. Let the state ideal be high. What we need is not the respect of our fellow men, but the chance to get something for nothing."

The spirit of something for nothing suffuses the 49th state. The U.S. government bought it for next to nothing - a mere two cents an acre. And ever since the territory became a state, Alaska's politicians have been trying to up the price through the back door.

Ted Stevens, the recently indicted senior senator from the Last Frontier, has been shipping anything not nailed down in Washington back home for years. Citizens Against Government Waste calculates that between 1995 and 2008, Stevens alone brought home some $3.4 billion in pork barrel projects.

Stevens has a worthwhile protégé in Don Young, famed champion of the Bridge to Nowhere. Talk to Alaskans and they'll explain that the difference between Ted Stevens and Don Young is that Young is a dimwitted, corrupt, belligerent, bullying, vindictive taxpayer goody-grabber; Stevens isn't dimwitted.

For the record, I have been to Alaska more than a half-dozen times in the last decade (currently I'm on Hillsdale College's Alaska Cruise), including to the northern coast, where I donated several quarts of my blood to the mosquito population while writing about the Arctic National Wildlife Refuge. My wife, a onetime staffer to former Alaska senator and governor Frank Murkowski, is from Fairbanks, and we visit her family pretty regularly.

One of the most striking things about Alaska is its cognitive dissonance. On one hand, Alaskans are understandably proud of their rugged individualism. But, politically speaking, their proud libertarianism is as authentic as a Bavarian beer hall at Florida's Epcot Center.

Alaskans say the pork pipeline is necessary because this wild state is wildly underdeveloped. Alaska desperately needs to catch up with states where paved roads are taken for granted. And so they're grateful to Stevens, who kept the state afloat with earmarks and kept military bases here.

But there's more to it. Alaska is not merely a vast northern West Virginia, producing pompous sticky-fingered polls to shoplift from the U.S. Treasury. In 1959, the U.S. accepted Alaska into the Union in exchange for nearly 60 percent of its land. Since then, the share has gone up to around 65 percent. The rest of the land is controlled by the state, tribes and municipal governments. All told, only 1 percent of Alaska's land is in private hands.

It's no surprise Alaskans see nothing wrong with gaming the government since the government is the only game in town. Business is in bed with government here because there is no other bed.

Sarah Palin, the popular governor of Alaska, plausibly claims to stand athwart that culture. In a talk in Juneau last weekend, she called for a new compact with the federal government. She exhorted Alaskans to become "less dependent on the federal government." Let Alaskans control their own resources, and Alaskans in turn will stop treating the nation's taxpayers like a national resource. (One reason Alaska is in danger of turning into a blue state - though not any time soon - is that its government-centric culture leads to government-centric voters, and the Democratic Party remains the party of government).

McCain, the self-styled maverick and environmentalist, is famously - and foolishly - opposed to drilling in ANWR, even though drilling technology is extremely safe, and oil and gas reserves there could be enormous. (A fully exploited Alaska could produce seven years of complete crude oil independence, according to Palin.) One motivation rarely discussed outside of the Senate cafeteria is McCain's intense dislike for Ted Stevens. Stevens represents nearly everything McCain loathes about Washington: business-as-usual coziness with lobbyists, (alleged) bribery, pork barrel spending, backroom deals, etc. McCain should openly campaign against Stevens while simultaneously embracing reform agenda that would include opening up ANWR.

The Stevens indictment (perhaps coupled with tapping Palin as a running mate) offers McCain a golden opportunity, in that Stevens is unpopular with the conservative base, thus - finally! - giving McCain a Republican to beat up without infuriating conservatives. McCain sorely needs a new narrative arc for his campaign. He need only ask - and then honestly answer - the question "What's the matter with Alaska?" to find that arc.