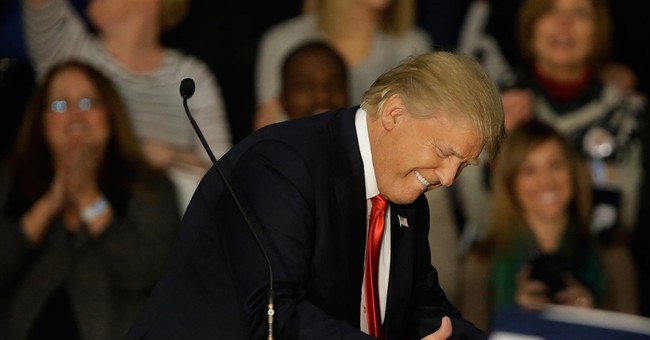 Trending
Sometimes I like Donald Trump. He makes me laugh when he mocks reporters' stupid questions.

Sometimes he's smart. When Maryland's lefty governor said a tax on rich people would "raise revenue," Trump told me why it wouldn't. The taxpayers would just flee: "I know these people! They're international people! Whether they live here or in a place like Switzerland, it doesn't really matter to them!"

When Trump makes billions by giving people things they want in voluntary exchanges -- via casinos or real estate or the chance to watch him "fire" people on TV shows -- I applaud him. Free trade is (SET ITAL) mutually beneficial (END ITAL). Everybody wins.

And it's appalling when Trump uses connections with government to (SET ITAL) take (END ITAL) things from others. I confronted him about that once.

In Atlantic City, an elderly woman named Vera Coking owned a home near Trump's casino. Trump wanted to take down her house so he could expand his casino parking lot.

People had offered to buy Vera's house, but she said no. In America, property rights mean you get to tell people, "You can't use my things without my permission."

But Trump wouldn't take no for an answer. He got some New Jersey politicians to grant him the right to (SET ITAL) take (END ITAL) Vera's house. Politicians can do that under a law called "eminent domain." Trump recently called eminent domain "wonderful!"

Eminent domain can be wonderful if it's put to important public use, say, claiming land for highways, railroads or a pipeline. But Trump got New Jersey pols to use it so he'd have a better space for limousines to park.

Also, under eminent domain, the state is supposed to pay the property owner "just compensation." But Vera had turned down a million-dollar offer. Instead of raising the bid, Trump got politicians to force Vera to sell for even less. Trump would have to pay just $251,000, a fourth what she'd been offered.

That made Trump a manipulative bully. So I told him that.

"In the old days, developers came in with thugs with clubs. Now you use lawyers!"

"Excuse me! Other people maybe use thugs today. I don't!" was Trump's angry answer. "For you to use the word 'bully,' John, is very unfair. ... It's a pretty sick assumption, and I think it's pretty jaded for you to make it."

Fortunately, after a long legal battle, an appeals court ruled that Trump could not take Vera's property. That worked best for everyone since it turned out that Trump didn't need a bigger parking lot. Trump and New Jersey pols hadn't predicted the future. His casino, like others in Atlantic City, went bankrupt.

Bankruptcy happens in business all the time, and only investors lose. But when business "partners" with government, innocent people get trampled.

Trump also tried to use his "get politicians to grab someone's land" scheme in Bridgeport, Connecticut, where he promised a "world-class" development that never happened.

This is "a powerful, politically influential person using his power to steal, essentially, somebody else's private property for his own private profit," says Tim Sandefur of the Pacific Legal Foundation.

But Trump said that his development might bring the city extra tax money, making it "public" use.

I wish Trump understood that. He isn't the only one whose ego is huge. So is government's -- always thinking it knows best.