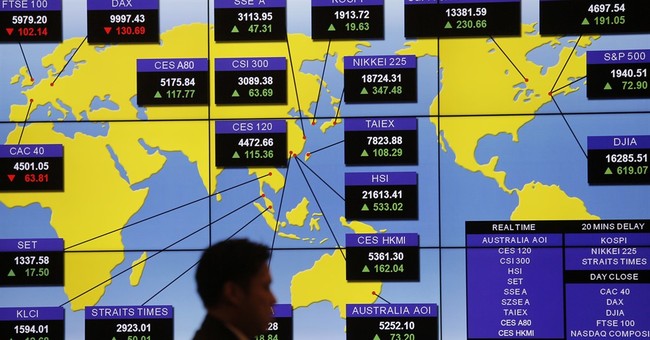 Trending
People have long lists of things they think the market can't possibly do -- from building subways to fighting wars. Sometimes, the market does them anyway.

War, for example. Even conservatives, who often praise markets, assume that only government can fight terrorists. Tell that to Matthew VanDyke.

VanDyke and his group, Sons of Liberty International, spent the past months in Iraq training the Nineveh Plains Protection Unit, several thousand Christians willing to risk their lives fighting against ISIS's brutal forces there.

I don't know if Sons of Liberty are as competent (or more competent) than the U.S. military, but they're not using taxpayer dollars or getting the U.S. involved in a wider war.

My TV show on "market magic" this week looks at other things markets do that we're always told only government can do -- like run courts.

People frustrated by legal bureaucracy and tired of waiting endlessly for government courts to make decisions now have alternatives. They can go to private arbitration companies and have their day in court without ever entering a government courtroom. An ABA survey of lawyers found 78 percent said arbitration was more efficient than government.

"But maybe the for-profit arbitrator is not fair or your opponent bribes the judge!" say market skeptics. That can happen. But if an arbitration firm gets a reputation for making flaky decisions or taking bribes, customers just don't use it. It goes out of business. That's how the free market works.

By contrast, badly run government courts, like other government agencies, (SET ITAL) never (END ITAL) go away. When they fail, they just claim to be "underfunded" and demand more money. Congress usually gives it to them.

Our air and most of our water are of course public property. It's good that we have an EPA (though we could use a less oppressive one) to protect such resources. But that also leads people to think we need more government force to handle problems like California's drought.

Economist Zachary Donohew points out that California's water shortage isn't just caused by drought, though. It's caused by government refusing to allow the price of water to be set by market forces.

"Water shortages are manmade," says Donohew. "We don't send the right signal to indicate how valuable it is, and we don't make it easy to move water from one use to the other."

In most of America, taxpayers pay for reservoirs and aqueducts, but water sent to consumers, farmers, etc., is practically "free." So people waste it. But if the price were allowed to rise to reflect its scarcity, everyone would economize. You might decide you need to cook but not wash your car. Important activities like agriculture would continue, but farmers might grow grapes instead of oranges, because oranges need so much water.

Decisions like that happen naturally when markets set prices. A price is more than money -- it's (SET ITAL) information (END ITAL). It tells people what is valuable. Then people adjust.

When we forget that, we panic needlessly. Even The Wall Street Journal, which generally understands markets, recently reported on a "looming shortage" of airline pilots.

But if there really is a shortage of pilots, pilot salaries will rise. More people will train to become pilots and any shortage will be brief.

The market steers people and resources to where they're most valued. That happens even faster if government doesn't interfere with markets by offering its own, poorly run versions of the services people want.

My fellow New York City subway riders believe government had to dig the subway tunnels and run the trains because "there's no profit in mass transit -- it loses money!" But in fact, most of New York's subways (SET ITAL) were (END ITAL) built by private businesses.

They only turned them over to government because politicians forced them to. A mayor claimed a proposed fare increase to 5 cents was "too much." Now a subway ride costs $2.75.

I used the phrase "market magic," but the market is actually better than magic, because there's nothing mysterious about it -- it's all logical.

The mystery is why we keep letting government get in the way.