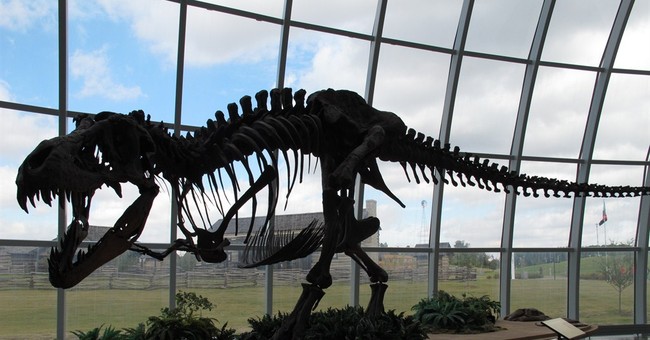 Have you seen the new Jurassic Park movie, "Jurassic World?"

It had the biggest opening of any movie in history. The movie tells how a reckless biotech company releases dinosaurs that kill its customers. Its tale of heroes vs. villains made me think about how America has changed since our independence, the anniversary of which we celebrate this weekend.

We call the men who fought the British "heroes." But we no longer consider the British "villains." We don't even seem to hate monarchs anymore. Disney princesses and royal babies are all the rage.

Hollywood needs heroes and villains, and over time those roles changed. It was once cowboys vs. Indians, then Americans soldiers vs. Nazis and "Japs," then Russians, then Arabs, then ...

Well, now Hollywood is more careful about whom it calls a villain. But one group is always eligible -- businessmen. In movies and on TV, evil corporations routinely dispatch heartless goons to rough up whistleblowers, political activists and average citizens. The new anarchist drama series "Mr. Robot" on USA Network even features a company called "Evil Corp."

Don't Hollywood writers realize that abusing customers would be a bad business model? No. They refuse to see that it rarely happens, and when it does it's unsustainable.

In the real world, instead of killing customers or scheming to keep them poor, companies profit by trying really hard to give us what we want, and they prefer that we stay healthy, if only so that we keep buying their stuff and to limit their insurance liability.

I say, entrepreneurs and scientists are the world's real heroes. They save and extend lives.

The website ScienceHeroes.com estimates how many lives scientists save. Fritz Haber and Carl Bosch, whose synthetic fertilizers made food easier to grow, are credited with saving 2.7 billion lives. Blood researchers Karl Landsteiner and Richard Lewisohn saved more than a billion by making blood transfusions possible.

Others in the site's top 10 include the creators of water chlorination and vaccines, as well as Norman Borlaug, credited with saving at least a quarter-billion lives for creating more abundant wheat strains and sparking the so-called "Green Revolution."

Then there are the creators of CPR, AIDS drugs, bypass surgery, pacemakers, dialysis and more, each with millions of lives to their credit.

But how many lives did those politicians save? Any? Mostly, they presided over a bureaucracy that imposed taxes and regulations that make it harder to innovate and save lives. What's heroic about that?

In the movies, anti-business activists like Erin Brockovich are depicted as lifesavers. Brockovich, a hustler for personal injury lawyers, used her ample charm and cleavage to recruit clients who sued Pacific Gas and Electric, claiming the power company gave them cancer.

That was highly unlikely, given that the accused chemical, hexavalent chromium, causes cancer only at much higher doses. PG&E workers, despite being exposed to much more of it, live longer than average.

But Brockovich still got PG&E to pay out over $300 million, of which she got $2 million. That makes her a hero?

Part of the problem is the way our brains have evolved to spot friends and foes. A big, faceless corporation isn't warm and friendly, but activists have smiling faces and say they want to help us.

Who has time to calculate the number of lives they've each saved? Our hearts embrace the ones who sound like they have good intentions but are wary of those who are out for profit.

I wish more people thought like statistician Bjorn Lomborg. Unlike many of his fellow environmentalists, he takes the time to rank the lives saved and the money spent on various projects, and he finds that the ones that inspire the most passion, like slowing global warming, aren't the ones where lives are most at stake.

Many more lives would be saved if we poured resources into cleaning drinking water or preventing malaria, but those crusades don't celebrate Hollywood's heroes or punish the "villains" in business.