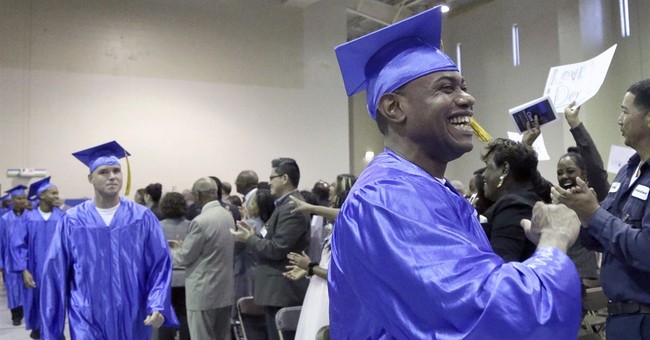 It's graduation time! Have we learned much? No.

College has become a scam.

Some students benefit: those with full scholarships and/or rich parents so they don't go deep into debt, those who love learning for its own sake and land jobs in academia and those who get jobs that require a college credential.

But that's not most students.

Politicians such as Hillary Clinton promote college by claiming that over a lifetime, college graduates "earn $1 million more." That statistic is true but utterly misleading. People who go to college are different. They're more likely to have been raised by two parents. They did better in high school. They'd make more money even if they never went go to college.

Economist Bryan Caplan argues that there isn't much evidence that college grads are paid more because they learned anything at college that is valuable to their jobs.

Getting into elite universities and graduating from them is mostly a "signaling" device, he says. It tells employers you're a smart person, so employers can begin teaching you things you really need to know. Employers, not the colleges, turn out to be the ones making students valuable contributors.

This suggests college is more like a hurdle than an investment. It would be better if companies found cheaper ways to screen for talent than four years of college.

Most of America's prestigious universities started out as training centers for the priesthood and ways of confirming your status as part of the upper crust. In many cases, that's still true today. Taxpayers shouldn't be forced to subsidize that. But we are.

Of course, "free" just means taxpayers are forced to pay.

This is nuts. When government subsidizes services, people supplying those services get wasteful. Colleges now spend millions on manicured lawns and fancy gyms.

A University of Missouri admissions officer bragged to my TV show crew about the university's "day spa" and said when it comes to recruiting students, "more important than reading, writing and arithmetic" is giving "our Tigers spring break every time they step into the student recreation complex."

I'm happy that Missouri's students like their luxurious gym, but I don't want to help pay for it. If the school thinks its "day spa" is crucial for recruiting, let them sucker their own alumni into making voluntary contributions for it. Leave taxpayers alone.

Government subsidies encourage students who don't belong in college to go anyway. Many don't graduate, feel bad about themselves and end up deep in debt. The subsidies also invite schools to increase the cost of tuition.

Democrats complained we need Obamacare because health care costs "were skyrocketing." But while the cost of health care rose 296 percent over the past 30 years, college tuition rose 553 percent. College is now a grotesque spending bubble, funded by government, that's about to burst.

But that's what Obama and Sanders propose to do.

A more compassionate move would be to warn people that college is not as valuable as colleges advertise themselves to be.

PayPal co-founder Peter Thiel encourages students to escape the college trap by paying them $100,000 not to go to college and instead to found their own capitalist ventures.

If we really want to build a better future and not just keep going through the same old motions, experiments like that are a much smarter idea than throwing more money at the college bubble.