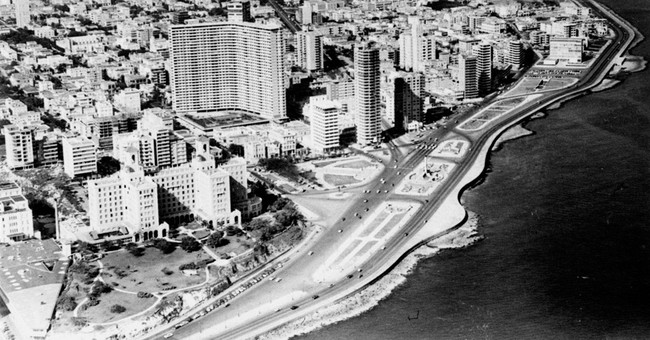 Last week, the New York Times reported that the Castro brothers opened a special business zone where foreign companies "would be given greater control over setting wages at factories. ... (P)roposals would be approved or rejected within 60 days."

What? If I want to give someone a raise, I have to wait up to two months for government approval! That's absurd.

Yet the Times said that the zone offers "big incentives for investors."

How clueless can their writers be? Their own article acknowledges, "A year later, the Cuban government has yet to announce a single foreign investment."

The article went on to say that "according to many economists, President Obama's plan to allow more interaction between the two countries may not be the lifeline Cuba is hoping for -- unless Cuba overcomes its resistance to change."

I suppose Times reporters need to consult economists to learn that entrepreneurs don't like having to beg dictators for permission to try something new. After all, back in America, Times editors demand increased regulation of almost every business.

I've learned to expect economic cluelessness from the Times, but what was different for me last week was that I was on vacation, and my hotel produced a short version of the Times every day called the TimesFax. It gave me a new reason to laugh -- and scream.

I flipped to a Fax page and read, "Firing of VA Clinic Chief Is Upheld." A judge ruled that Sharon Helman, director of the Veterans Affairs health care system in Phoenix, "could be fired for accepting more than $13,000 in airline tickets and other gifts."

What? Taking gifts is the scandal? She's not fired because of her falsified waiting lists for treatment? Because thousands of veterans at her facilities were cruelly lied to and then denied medical care?

No, "the department had not provided sufficient evidence to justify firing Ms. Helman for the manipulation of waiting lists."

At least the Times got the bureaucracy's rules correct. If you work for government, no matter how incompetent you are -- even if you do cruel, selfish things that may have killed people -- you can't get fired unless an "administrative judge" rules that all arcane civil service due process protections have been honored.

You can only be fired if you step outside the bureaucracy's rules and happen to get caught, say, taking obvious bribes like eight-night stays at Disneyland from a company that wants to do business with your agency.

Nowhere does the Times article address the elephant in the room: No organization can do anything efficiently, or even reasonably, unless workers can be fired. Government workers' special "protections" are a reason taxes are high, bridges fall down, public schools decay, the CDC loses Ebola samples and so on.

But Times writers constantly call for more government, "job protections," etc. Few of them have ever run a business or invented something new themselves. If they had, they might understand this obvious cause of government failure. But they don't. They are oblivious.

Finally, there was one cheerful headline, "Inroads Against Climate Change." Here I thought a writer might acknowledge that modern industrial civilization brings benefits. The reporter said, "Saving forests ... will require producing food much more intensively, on less land."

Yes, but that's already happened! Modern industrial agriculture produces more food on less land, so America now has more forest than a hundred years ago. Will the Times report that? No, the article was the usual leftist mix of support for "government leaders" pushing "sustainable practices."

The writer also ignored how fracking has lowered America's greenhouse gas emissions. Instead, he suggests that Americans must be guilt-tripped into giving billions more dollars to developing nations instead of "only a few billion."

I used to get angrier about such clueless reporting because when I worked at ABC News, editors based entire shows on silly ideas from the Times. Now we have more sources of news, so one newspaper doesn't matter as much. Thank goodness.