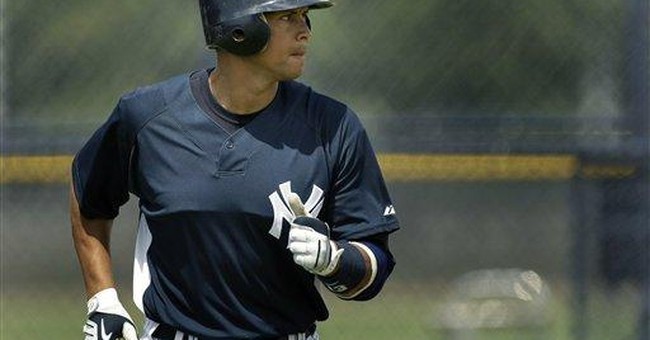 With the return of baseball and a new book on Alex Rodriguez released this week, a fresh round of congressional posturing about steroids is upon us.

Why is it Congress's business?

I asked U.S. Reps. Elijah Cummings, D-Md., and Cliff Stearns, R-Fla., about that for my next TV special, "Don't Even Think about Saying That!," which will air this Friday on ABC.

"This is part of our duty," Cummings says, "to protect the American people." Steroids are "a serious public-health problem."

And Congress will fix it all.

Of course, people like Dr. Gary Wadler testify in Congress that steroids do horrible things.

I'd heard such scary claims for years. Death by steroids. "Roid rage" worthy of after-school specials.

Years ago, when a pro wrestler beat me up, I was told that steroids drove him to do it. Steroids were blamed for wrestler Chris Benoit killing himself and his family, and teenage baseball star Taylor Hooton's suicide.

But Dr. Norman Fost, a bioethicist at the University of Wisconsin, says it's all bunk. The anti-steroid movement, he says, is filled with hysteria and hype.

"The horror stories about the medical claims . . . some of them are just frankly made up."

To my surprise, Wadler admits that's true. And he's not so certain about other claims. When I asked him if steroids cause strokes, he said, "It's on a possible list."

"The likelihood of anabolic steroid abuse being associated with heart disease is real."

Note the waffle words like "possible" and "associated." He uses them because -- unlike smoking and cancer -- there are no long-term epidemiological studies that show steroids cause those diseases.

Every drug is "associated" with side effects. Advil is associated with ulcers and shock.

It's not that steroids are perfectly safe. But why single them out?

Yes, steroids use is associated with hair loss, acne, testicular atrophy and even growing male breasts. But Fost says those side effects would be minimized if steroids were legal.

"If athletes are going to use these things, it would be better to have them on the table where informed doctors can help them get the right drug with the right dose and fewer side effects.

That's not good enough for Wadler. "I don't think you supervise ... the abuse of a drug."

For Wadler, "abuse" is any use that's not medically necessary. But entire fields of medicine are devoted to "unnecessary" procedures -- breast enhancement, hair replacement, etc. Consenting adults should be free to do pretty much whatever they like to their own bodies.

If steroids are such a terrible threat, there must be lots of high-profile deaths. But Wadler couldn't cite any.

The Chris Benoit 'roid-rage murders and suicide? The medical examiner later said there was no evidence proving the testosterone he was taking caused the crimes. There's evidence that steroids can increase aggression in some people, but, Fost says, "The overwhelming examples of criminal behavior by professional athletes has nothing to do with steroids."

Hooton was taking other risky drugs like Lexapro, which has been shown to cause suicidal thinking.

That wrestler who hit me later said he did it because his boss told him to.

Health issues aside, what about sportsmanship?

"I don't know why you would think this is cheating any more than the hundred of other things athletes do to enhance their performance," Fost said.

Tiger Woods improved his eyesight with surgery. "Janet Evans won a gold medal in swimming," Fost noted, "and bragged about a greasy swimsuit that she was sure had a lot to do with her victory."

Wadler defends the anti-steroid rule because "abuse represents a significant risk to health and, in fact, enhances a criminal element."

But there's only a criminal element because zealots like Wadler insist on making steroid use illegal!