Madoff Is a Piker 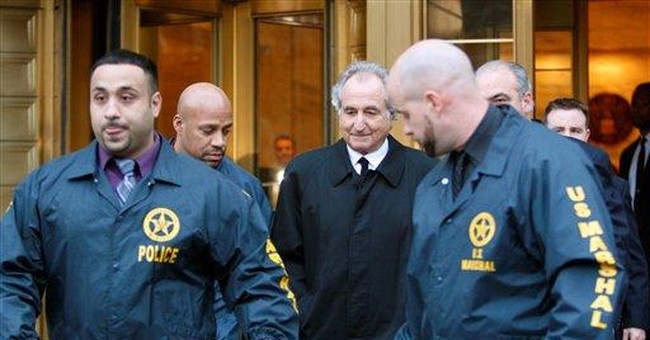 Bernard Madoff, who stands accused of bilking sophisticated investors out of $50 billion, is reported to have told two of his executives that his business was "a giant Ponzi scheme."

Perpetrators of Ponzi schemes lead clients to believe their money is invested and that their profits are the fruits of the money manager's savvy. But in fact, the "profits" are merely revenue provided by the next group of dupes. Eventually, when no more new dupes can be found, the scheme crashes.

Political leaders say Madoff's alleged crimes show what's wrong with the country. President-elect Obama said the "massive fraud that was made possible in part because the regulators who were assigned to oversee Wall Street dropped the ball." Senator Majority Leader Harry Reid added, "[R]egulators have been asleep at the wheel."

Politicians go on and on about Wall Street "greed" and "irresponsibility."

But Madoff's scam was small compared to Ponzi schemes the government itself runs: Social Security and Medicare.

By now we all know the government does not invest our payroll taxes and pay our benefits with the profits our money earns. In the beginning, writes economic historian Charlotte Twight in "Dependent on D.C.", Americans were told Social Security was an insurance program. But the government was unable to sustain that bald lie.

In reality, our money, rather than being invested and kept in an actual "trust fund," is immediately given to current retirees in Social Security benefits or to their healthcare providers in Medicare benefits. The government's promise to pay for your retirement pension and medical care is just a promise. And a lie.

In theory, the promise could be kept by raising taxes on future workers, but there won't be enough of them. Changing demographics are destroying the programs. A large working class can support a relatively small retired class, especially when life expectancy is 61 years and benefits don't begin until 65. That's how things were in the early years of Social Security. But when life expectancy grows to 80 and a large generational group -- the baby boomers -- retires expecting to be supported by a far smaller working class, that's trouble.

Ten years after Social Security passed in 1935, there were almost 42 workers for each retiree. Five years later, the ratio slipped to about 17 to 1. Now it's about 3.4 to 1. Thirty years from now, the ratio is projected to be 2 to 1.

Think of the burden on those two to three workers who'll have to support one retiree for 15 to 20 years.

The money just won't be there. In the next 75 years Social Security and Medicare have a combined unfunded liability of $40.3 trillion. Social Security's problems get most of the attention, but Medicare will be the killer. At present it accounts for all but $4.3 trillion of the unfunded liability, and as we aging boomers keep demanding new, improved and more expensive medical care, the deficit will only get worse

Soon government will have to say what Madoff said: Sorry! The money's gone.

The government has no legal obligation to make good on its promises. Twice the U.S. Supreme Court ruled that Americans have no contractual rights regarding Social Security benefits. In 1960 (Flemming v. Nestor), the court said, "To engraft upon the Social Security system a concept of accrued property rights would deprive it of the flexibility and boldness in adjustment to ever changing conditions which it demands."

Get that? You have no "accrued property rights" under Social Security. It's a welfare program that exists at the politicians' pleasure.

The government will either stiff us outright or, more likely, cowardly politicians will pretend to honor their promises by printing so much extra money to write the checks that the dollar will be worth pennies.

If Bernie Madoff tried to foist Social Security and Medicare on us, he'd be arrested, prosecuted and thrown in the hoosegow.

There's one thing I can say on behalf of Madoff: He never forced anyone to participate in his scheme. That's more than I can say for the government. Through taxation and inflation, it forces us to pay for all its schemes.