That’s it Obama: Go Wrap Yourself in a Dead Cop 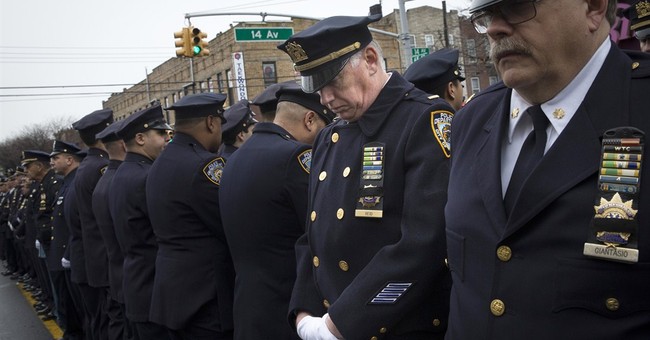 Let’s make one thing absolutely clear at the outset: Neither Barack Obama nor Bill De Blasio ever considered a political action they didn’t respect. These guys are all politics, all the time.

If any of their kids got killed they’d figure out how to do a fundraiser off of it or run a campaign.

And if that’s an exaggeration then the burden of proof is on them to disprove it. Because we have ample evidence that they lack the normal human decency that tells the rest of us when we have gone too far.

Exhibit One from the White House is the statement in support of NYC Mayor Bill De Blasio-- who is Exhibit Two-- the guy cops are angry with—along with Obama—for creating a hostile work environment in the city that they believe has lead to the deaths of cops.

Police Commissioner Bill Bratton recently wrote a letter condemning the officers who turned their back on Mayor De Blasio at the funerals of officers Rafael Ramos and Wenjian Liu, calling it a “political action” because the mayor and union reps are at loggerheads over a contract that expired in 2010, well before the world even knew who Bill De Blasio was.

And of course Bratton is wrong.

Certainly more fairly than those who victimize the neighborhoods these cops tried to keep safe.

And into this miasma of ill will comes the White House-- which by the way, could very easily dodge getting involved here, but is just crass enough to think that genius who wants the IRS reading your hospital chart, also needs to express an opinion on EVERYTHING else too.

"The part of Commissioner Bratton's letter I think that resonates most strongly here at the White House is that those who are attending those funerals are there to pay their respect for the service and sacrifice of the two officers who were being laid to rest," said White House spokes-puppet Josh Ernst. "And certainly the President believes that their service and their sacrifice is worthy of celebration and respect and should be afforded all the outward symbols of the honor that they've been given."

Yes of course: all the outward symbols need to be respected, but you know, not the men themselves.

If ever there was a time for the White House to just shut up, this is it.

But, no: Obama JUST CAN’T HELP HIMSELF.

Nor can De Blasio.

Memo to them both: It’s never right to wrap yourself up in dead cops.

Faced with a choice between the high road and the low road, Obama and De Blasio took the road not taken—not taken because no one would have the gall to do what they did, which is politicize the deaths of the two police officers in the midst of labor negotiations.

"Wrong Way" and "Do Not Enter" signs mean nothing to these guys.

Let’s be clear about something else: If this was a teachers’ union or the UAW, both men would have kept their mouth shut.

But these are police officers-- officers who likely don’t support the president or the mayor. In other words: They are not either man's base. Therefore they are dead to the two of them.

These are the guys who applauded Rudy Giuliani and George Bush.

For Obama and De Blasio that’s enough of an indictment to throw caution to the winds and pop off about how they’ve been done wrong by the cops.

But if that weren't enough, this certainly is: The cops ruined these politicians set speeches and lectures on race relations with a cold dose of reality.

And reality is this: This country could lose a few Obamas and De Blasios from public life, but we just can’t afford to lose more like Ramos and Liu.