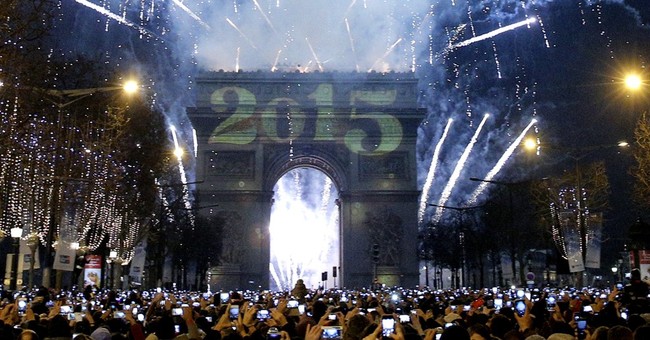 Dateline: January 23rd, 2015: Washington: Republicans in the House and the Senate do THE slam dunk in the Democrats’ face by passing the Keystone XL Pipeline authorization. Not only does the bill authorize the controversial pipeline, but it also comes in at 11,571,283,475 pages long. “Take that, Pelosi!” Boehner shouts at the Rose Garden ceremony where Obama signs the bill. “Read that before you pass it byotch!”

That’s right: Obama agrees to sign the Keystone bill in the Rose Garden because on page 2,351,546,379, buried in a footnote, the bill authorizes construction of the pipeline so long as no actual “pipes” are used in construction. Both sides announce it as a breakthrough for bipartisanship.“Think of what we can do together,” says Hillary Clinton, “now that technology lets us write bills no one can possibly read. Ever.”

Boehner cries, but later claims that smoke just got in his eyes.

One amendment to the bill is said to contain the entire Harry Potter series.

Putin distracts his countrymen however by announcing his intention to build “Venice of the North,” or a “City of the Snows” above the Arctic Circle called St. Putinsberg. City planners later name it Putinsgrad, then change it to Leningrad, then to Stalingrad, then back to St. Putinsberg before it is announced in the Russian Army newspaper that the city planners all suffered heart attacks simultaneously during the last planning session.

Putin announces the completion of the construction phase of the “new” St. Putinsberg when a drive-through Fotomat kiosk is completed on Nevsky Prospect near the Peter the Great’s Admiralty building.

Dateline:March 28th, 2015, Caracas: For the first time ever OPEC cartel members agree to pay people to use oil.

Prices have gone so low that producers are tired of racking up expenses for oil storage and pay countries to haul away petroleum.

In a bold proposal put forth by Dubai, the OPEC cartel agrees to study a proposal to diversify their economies into economic sectors that will produce “jobs” for populations of the petro states.

Citizens in Iran and Venezuela riot in the streets as gas prices climb to 27 cents per gallon. “Before you know it,” says one Iranian mullah, “we’ll have to use renewables like wood to burn witches, gays and Jews.”

No don’t stop me.

No matter many times you hear it, it’s still funny: Pelosi, Holder, Obama and DeBlasio walk into a cop bar…(I crack myself up).

Dateline: May 22nd, 2015, Somewhere in Florida: Jeb Bush holds a hastily called press conference to remind people that he really-- “double promise”-- is running for president.

He cites a thousand points of light, “read my lips: COMMON CORE” and a kinder and gentler Obamacare as his main justification of the run. Also: “Mom and dad promised me it was my turn after George butted in front of me in 2000.”

When questions are called for at the question and answer period of the presser, silence reigns.

“I really am running,” pleads Jeb.

“Yes, we know you are,” replies a weary Ed Henry of Fox News.

Dateline: June Teenth, 2015, Rome: The Vatican announces that president Obama now has the ability to forgive sins by executive order.

“Yes, by use of the phone and pen, president Obama, who I understand is a black man” says Vatican spokesman Father Guido Sarducci, “can now bestow the eternal forgiveness that is usually reserved only to parish priests.”

After a backlash by Catholic faithful, the Vatican later explains that the announcement was actually intended as a flyer for “Meatball Dinner” Sunday at Our Lady of the Holy Rosary in Little Italy in San Diego, but was mistranslated.

Tickets are still on sale at meatballs.com.

For more information contact Deacon Joe or Sister Mary at the rectory office.

Inflation is no longer tracked. Houses are longer sold and the stock market closes the month at [insert you own number here] on the S&P.

Dateline: July 24th 2015, Washington, DC: The 14th Clerk of the House of Representatives in a row dies in his official capacity when that jerk, Senator Ted Cruz of Texas, convinces a majority of House members that perhaps every piece of legislation should be read in the House before being passed—like who the hell is he?

A White House statements says, with a certain amount religious ambiguity: “The least a grateful nation can do is make sure these clerks get their 72 virgins. For more information contact Sister Mary at the rectory office.“

Inflation? What inflation? Houses? What houses? Stock market finishes the month at 6231 on the S&P.

“We just don’t know what else to do,” explains Fed chair Janet Yellen. “Inflation has never been this late. We just hope it’s okay. We plead with anyone who has any information about where inflation went to just bring it back. No questions asked. We just want our baby back.”

Anyone with information is urged to contact Deacon John at the rectory office.

There are still tickets available for "Meatball" Sunday.

Dateline: September 13th, 2015, Pyongyang, North Korea: In a surprise announcement dictator Kim Jung Un says he’s been raining nuclear weapons down on his own country in a bid to “gussy up” the place.

“Um, honestly sir,” Staff sergeant Jayson Fort, US Army, on the demilitarized zone between North and South Korea tells Fox News’ Ed Henry, who is still weary, “we didn’t notice anything—and we are paid to look. The place is that crappy. I guess it’s kind of like the Jeb Bush campaign.”

“Turn those machines back on,” is a common phrase now heard around the exchange—this time with a smile.

Dateline: October 8th, 2015, Washington, DC: Eric Holder is forced to resign—again-- after it is revealed that there never was a serious attempt to hold a “Meatball” Sunday at Our Lady of the Holy Rosary.

Documents obtained by Fox News under the Freedom of Information Act suggest that it was a sting operation in cooperation between the FDA and the DOJ designed to track Catholic parishes making meatballs with “volunteer” labor, thus denying meatpackers the right to have abortions on demand.

Sister Mary and Deacon John both have critical hard drive crashes thus destroying key evidence tying the scandal back to the White House. Neither is available for comment at the rectory office.

Tickets however are still available online.

We will now pray for everlasting inflation…in the name of Obama, etc. etc.

No don’t stop me.

No matter many times you hear it, it’s still funny: Pelosi, Holder, Obama and DeBlasio walk into a cop bar…

Ah, those were the days when inflation was double digits, Jimmy Carter was president and Iran knew how to intimidate America…oh wait…

Dateline: December 31, 2015, Iowa…somewhere…hey…really it’s Iowa; it all looks the same, ok? But trust me. The corn stalks and fried Twinkies on a stick scream IOWA!: After vaulting to lead in the Iowa GOP presidential caucus Jeb Bush holds a hastily called press conference to remind people that he really is running for president.

“Mom told me I could,” Jeb says, sticking his tongue out at Fox News’ Ed Henry.

Really. He means it.