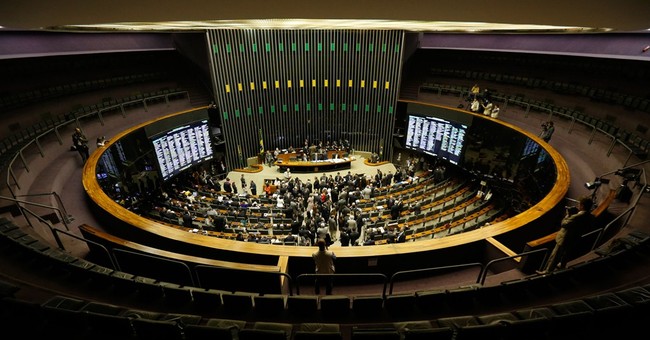 Say what you will about the compromises contained in John Boehner’s spending bill, but there is at least one thing about it I love: Nancy Pelosi hates it.

At issue are the reform measures the GOP inserted in the bill to get rid of excessive regulation in Dodd-Frank and so-called campaign finance reform.

Pelosi expressed enormous disappointment in the White House, which supported Boehner’s bill, would support the roll back of Dodd-Frank and the 1st Amendment violations in the name of campaign finance reform.

The thing conservatives should understand about this lame duck Congress is that what they do here is a lot like preseason in the NFL: It doesn’t count for the upcoming regular session and if the team can avoid serious injuries, they’ll probably be okay going forward.
But to the extent that the GOP can work on installing offensive and defensive plays for the party right now they should.

What’s most remarkable about the budget bill though is that so many Democrats, who would have never previously voted for this, decided to break with their party – including the president-- to get a budget done. Almost a third of Democrats in the House voted for it, presumably out of a sense of self-preservation.

That a president would finally get a no drama spending bill passed isn’t a condemnation of the GOP, but rather its exoneration.

The message from Democrats right now is clear: “We suck.”

“There are some people that are upset about things in this bill. To be candid with you, I’m kind of upset about some of the things in the bill,” said Senate Majority Leader Harry Reid on the Senate floor. “But this bill is so much better than a short-term CR.”

That’s because Reid knows that the GOP will pass what they want next year if they don’t get this done. And then the president will have to shutdown the government if he won’t sign the bill. All the grandstanding, all the fake ropes around monuments, all the abuse of veterans trying to visit open air monuments to the wars in which they fought and bled will sit squarely on the shoulders of the president.

The last shutdown was bad enough for the Party of “No”—the Democrats for those with trouble keeping score—imagine how bad it would be next year when the people would have no one to blame but the president.

Boehner right now is only testing the resolve of the president, which has been found wanting.

That’s because there are far more bitter and better battles to come.

And no, Congress can’t do many of those things on its own. But it can set the tone for the country. It can look statesman like.

Things in this country happen gradually, not all at once.

We lost many of our liberties over a period of time, not because of some seminal event.

To get them back will also happen gradually.

So, we got a victory; a small one to be sure.

But it’s just preseason and already Pelosi is disappointed.

Excuse me while I do the touchdown dance.