Obama: To Build a Village Ignore Your Family 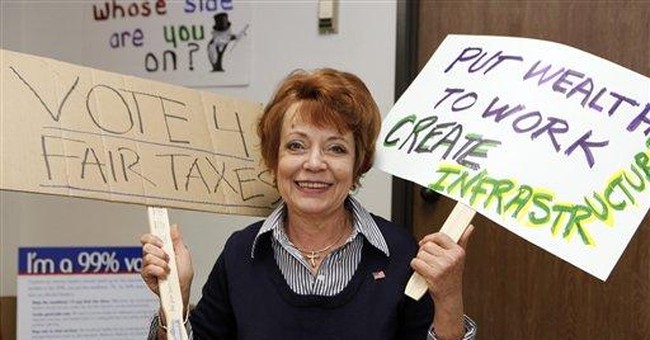 You can’t build it by staying home.

Build what? The utopian Obama state where we all work to feed the government, his government; a government that feeds itself by dining on European cheeses and arugula.

Families in this case are superfluous. It’s a luxury he says you can’t afford.

To build that village you can’t start on your home.

That would be selfish.

So, it’s been decided. Your only utility is to work, woman.

“Sometimes, someone, usually mom,” says the taskmaster-in-chief, “leaves the workplace to stay home with the kids, which then leaves her earning a lower wage for the rest of her life as a result. And that’s not a choice we want Americans to make.”

In fairness to Obama, put yourself in his place.

You’re a struggling Democrat with a spending problem. You’ve already cut other required spending programs like defense to a point that it even embarrasses your own party. And your expenses are gonna mount in the coming years.

What choice do you really have but to make women, all women, work so that they too can pay their fair share that they owe to the rest of us who presumably are working to pay for their birth control so that they don’t build, ya know, one of THOSE?

A family. To build a village you need to ignore your family.

Just as a matter of fairness, women need to work, in other words. It’s just not fair to those women who do work, who pay those taxes, like the all-important payroll tax, which of course none of us ever expect to see again.

But that’s not important.

The important thing is to WORK.

Look at Obama for example. Even when he’s golfing, he out there thinking about ways to raise taxes, different methods of spending the money, trying to take care of his friends.

Does he even think about taking time off from that kind of work?

And you shouldn’t either.

It’s your patriotic duty to ignore your kids, get back to work, generate the lion’s share of taxes that will fuel generational, and class wealth re-distribution. Your kids will grow in any event. And heck, aren’t selfies just a more efficient way of storing the memories of them that will last as long as you data contract?

And let’s face it, with a life like Obama’s some of those memories are best left in the distant, distant past…or better yet Photoshopped.

It certainly better than attending those horrid back-to-school dinners with the velvety mac and cheese and those people who cling to their guns and their religion.

What do you call those people?

Which reminds me. Shouldn’t we put an end to taxpayers congregating at schools at night. It amounts to a government shutdown when they aren’t working.

If we would just work harder, especially all you women, we could afford more of Obama’s bad ideas.

You just want to stay at home with your kids. And bake cookies.