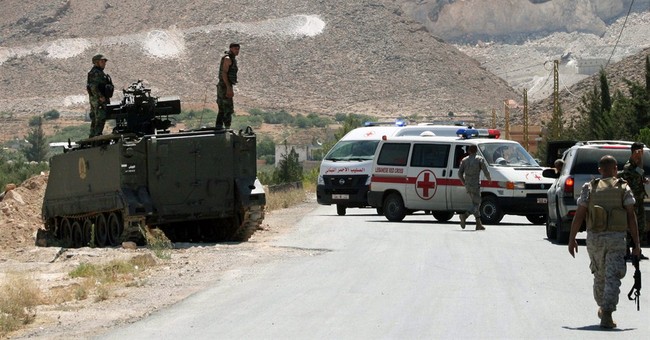 History doesn’t repeat itself, but it rhymes, quipped Mark Twain.

As with most of Twain’s homilies, it’s funny because it’s true.

So as the world commemorates the Guns of August—that is, the start of World War I-- history is not repeating itself. But the world today does seem to have a certain poetic, unrhymed iambic pentameter in common with the Great War.

“With a dimming of the lights and ceremonies across this country and in Belgium, monarchs, princes, presidents and citizens prepared on Monday to mark the day 100 years ago when Britain entered World War I at the start of four years of carnage once called the war to end all wars,” writes the New York Times.

But, unlike Twain’s prose, the humor—that is, irony--is missing here.

"The lamps are going out all over Europe,” said Sir Edward Grey at the start of the war we now commemorate. And in one of the most prophetic statements of all time, he added: “We shall not see them lit again in our life-time."

Similarly, lights are going out all over the world today, with war disguised as peace and peace disguised as war.

Our “Shining Beacon-on-a-Hill”, which once lit the world, has been replaced with a government-approved, low-watt bulb that costs more, sheds just enough light to keep people in the dark and can only be serviced by qualified environmental specialists who the government provides for us for “free"; we have recently embarked upon the most unstable, balkanized, and dangerous period in our history since America re-lit the European lamps after World War II; War is on the march as we wage a “peace” of our own choosing. And this “peaceful” period is war in masquerade, just as the jousting prior to World War I can be seen as a war by other means. Today’s peace is certainly indistinguishable from war if you count death and destruction as the main fruits of war.

Bolshevism and Menshevism are back too, after a fashion. Today we have government-approved bribes meant to keep us “dark people” obedient; and we have a government run secret police meant to keep an eye on all of us radical agitators in the Tea Party movement.

Today the Cossacks used to keep us in line don’t ride chargers, but rather metadata, pattern recognition software and signals intelligence; or tax returns and government applications; or the federal register where new rules and regulations are promulgated by unelected bureaucrats who make up in viciousness what they lack in common sense.

So as a helpful afterthought, the government does the rest to drive us to anti-social behavior thereby ensuring a new generation of anti-socialists.

At the outbreak of World War I, Europe went to war lightly, as if some great weight had been lifted from their shoulders; as if the seas would stop rising and the world would begin to heal through the carnage of war. Crowds thronged in the squares of European capitals, singing songs about hope.

“I am not ashamed to say that, overcome with rapturous enthusiasm,” said private soldier Adolf Hitler about the start of World War I, “I fell to my knees and thanked Heaven from an overflowing heart for granting me the good fortune of being allowed to live at this time.”

Hitler wasn’t alone in this.

"I've never been quite so happy in my life, I think,” wrote the English poet Rupert Brooke. “Not quite so pervasively happy; like a stream flowing entirely to one end.”

Brooke didn’t live to see the war’s end. He died at age 28 from a mosquito bite on the Aegean sea as he waited offshore for his chance to die, as so many other Englishman did, in the assault on Gallipoli.

Brooke, like the rest of his generation, went to war singing about hope. He is most famous for writing poetry about it too. Poetry is just verse unsung.

And all he got for his trouble was change; change he would not have recognized, nor likely approved of.

As we commemorate the 100-year anniversary of the war meant to end all wars, we should not forget that we still have a president who said that he means to be the president to end all wars. And Europe, not to say the European parts of the United States, fell down on their knees in rapturous enthusiasm for him.

So yes; history doesn’t repeat itself.

But I’m still not laughing.