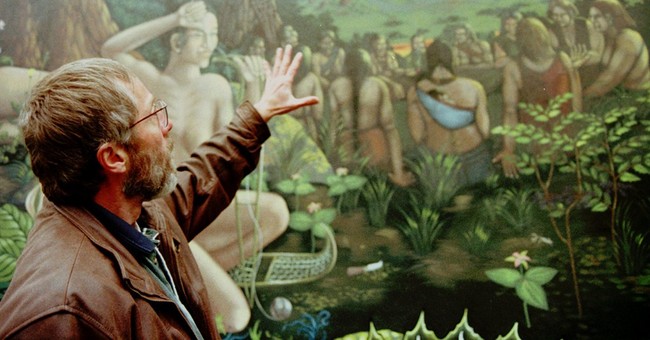 Scientists are desperately scrambling to face the newest “global change” problem: plastic in the ocean.

A recent expedition involving over 400 scientists from around the world has discovered that there is plastic in ALL of the world’s oceans.

Really. ALL of them.

“The findings reveal that plastic pollution is far more widespread than first thought,” says Science World Report. “Rather than being in isolated pockets of the ocean, it's a global problem. It's clear that steps need to be taken in order to reduce the amount of plastic waste currently winding up in our world's oceans.

A quick survey of American households reveals that there is plastic there too.

In at least one American household that I’m aware of, plastic grocery bags have taken over at least 23% of drawer space in 87% of kitchen drawers and 63% of the corner space in ALL of kitchen cabinets.

The first step of course in confronting the irresistible tide of global change from plastic, will be the mad scramble of dozens of film stars, thousands of research scientists, tens of thousands of environmental activists, and hundreds of thousands of gullible young who, while pretending to get an education, will demand government grants be made available to study the problem.

And count on the scientists to do their part to confront the problem.

This is step two.

Valiant public servants that they are, they’ll devote countless “person-hours” to writing grant proposals, having conferences at hotels they otherwise couldn’t afford, and acting like they really work, all while wearing corduroy pants and flannel shirts in solidarity with those recently denied access to free birth control chemicals—that are subsequently peed into the oceans.

The man-scientists, of course, will likely wear something a bit more effeminate in solidarity with urban hipsterism.

“[T]he abundance of floating plastic fragments allows many small organisms to sail on them and colonize places they could not access previously,” says Andres Cosar, a researcher with the project. “But probably, most of the impacts taking place due to plastic pollution in the oceans are not yet known."

And that’s when the big money starts rolling in.

They could take 100 years to identify and incorrectly forecast the problems associated with ocean-borne plastic.

While you non-scientists see the missed forecasts as some type of problem with the “science”, in truth the incorrect projections serve the most important scientific outcome imaginable: They keep they gravy train rolling while pushing doomsday to just behind the next horizon.

“Our observations of the size distribution of floating plastic debris point at important size-selective sinks removing millimeter-sized fragments of floating plastic on a large scale,” says an abstract from the report. “This sink may involve a combination of fast nano-fragmentation of the microplastic into particles of microns or smaller, their transference to the ocean interior by food webs and ballasting processes, and processes yet to be discovered.”

“Processes yet to be discovered” is the part that’s most worrying, of course.

There’s already an army of 400 scientists waiting to discover the unknowns.

So please, whatever you do: Don’t tell them about my kitchen.