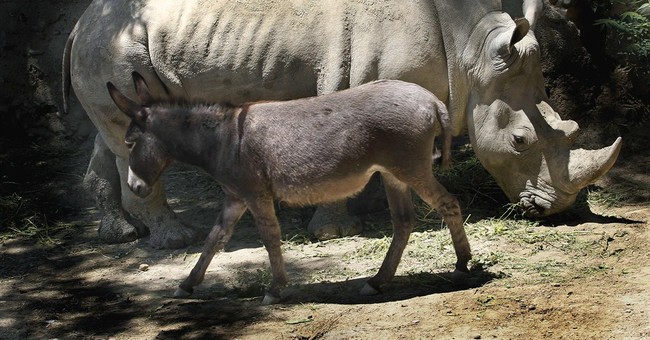 This country is a bunch of lions led by donkeys, as the Germans said about the English Army in the first war.

The latest Obama-related bray is the revised GDP numbers for the first quarter. Economists expected the economy to grow by 1.9% even after a discount for the cold weather.

Instead the initial estimate saw a contraction of 1%.

As we approached the revision to the initial estimate, we began hearing that perhaps things would be even worse in the next estimate.

The revision came in at a contraction of 2.9% for the first quarter.

But hey, the markets are making new highs because with things this bad, the government will continue making money, as in printing it.

At least those poor Wall Street traders and bankers are making money.

Economists missed the estimate by 5%.

If this were a miss to the upside it would be like posting GDP growth of 7%--which happens never—when the forecast was 1.9%.

How exactly do economists keep their jobs?

Never in the annals of human history have so many been so wrong about so little growth.

Oh, I can already hear the excuses coming out of Washington.

Only in DC, where they are already spending too much money, would a $200 billion increase in spending since 2009 be considered austerity.

Remember 2009? Summer of Love Me Some Greenbacks?

Yeah, we were supposed to get all those “shovel-ready” jobs through the ingenious use of your credit power by the greatest president in history of the last two months.

Today we spend even more money, despite not throwing away a trillion dollars on “shovel-ready” jobs, DOE Loans, green graft and it gets us…nothing.

A jackass braying at night.

And of course there is Paul Krugman, the columnist who plays economist, politician and God for the New York Times.

Maybe it’s time to get Krugman to make a revision to the Keyensian canon law.

Because the Messiah has not returned yet.

It turns out that the new New Deal, is pretty much the old New Deal.

Unless you are a captain of industry, a union boss, or a special pleader with an amount of cash in your pocket to match your gullibility, this economy has left you behind.

And with the usual Obama-related irony, I calculate that number of Americans to be about 1%.

The rest of us 99%-ers have to make do with the shrinking economic pie, which both Obama and his friends are either shrinking on purpose, or they are shrinking it by mistake.

It’s all over now, except for the braying.

“If one man says to thee, ‘Thou art a donkey' pay no heed,” says the Talmud. “If two speak thus, purchase a saddle.”

That’s a spending program I’d get behind.

It’s time to send the Messiah out of town, the way he came: On an ass.

Or rather a bunch of them.

*“Anyone” for the purposes of this illustration is defined as people who were not donors of $1,000 or more to Obama’s campaigns in election cycles 2008 and 2012, including their affiliates, employees or members of their immediate household. This definition is void in California, Michigan and Illinois.