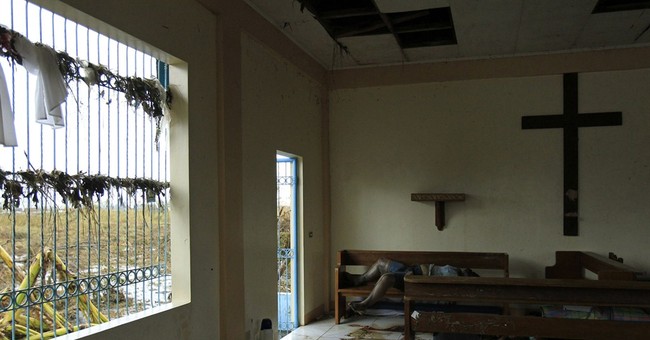 What is wrong with you people?

A Black Mass was to be celebrated at Harvard.

“The event, organized by the Harvard Extension Cultural Studies Club and the New York-based Satanic Temple,” writes FoxNews, “is to take place at an on-campus bar and is being billed as part of a ‘larger effort to explore the religious facets’ that influence contemporary culture, organizers from the Harvard Extension Cultural Studies Club say. The ceremony has traditionally been performed by satanic cults to parody the Catholic Church, and officials at the Archdiocese of Boston are furious that such an event could be held on the Ivy League school's hallowed grounds.”

Let’s just celebrate cannibalism and human sacrifice too, while we are at it.

These would be less gratuitous and less evil because as misguided as those anthropological antiques are, they were legitimately cultural, even if the culture they represented was inferior and backward, and destined to die.

Understand this: a Black Mass isn’t the mockery or parody of the Catholic Church, but a complete inversion of the moral order of the universe as represented by the God of the Jews, the God of Christians and the God of Islam.

It’s an invitation to Satan, and all he stands for into our lives. And you don’t have to believe in God to understand this.

Satanism isn’t the complete collapse of the moral order; rather it’s the advocacy of immorality as a positive good, as the superior order of the universe-- and even if you don't believe in either Satan or God, one should worry about encouraging people to celebrate evil.

Nothing good will come of this.

Death, rape, murder, disease, famine, plague and the Holocaust as a way of life, as expressions of culture that must be respected, even subsidized, treated publicly as ranking with saintliness.

Churchill bemoaned a time when his contemporaries could no longer recognize evil and bet civilization upon it.

We see their bet today, and raise them 100, by throwing Satan a party where all are invited to partake.

Even atheists should be appalled.

Because we can count the socialist, humanist circle as complete.

Socialism, as Dostoevsky pointed out, promised humanity that they would find a way to live for the brotherhood of man without the prop of God.

In fact, as large parts of the 20th Century can attest, socialism and humanism only thrive on their adversarial relationship to God.

Far from being free of God, socialism, even especially American socialism, remains in thrall to God, threatened by his non-existence at every turn.

To defeat this scourge of God they must denigrate him and throw his believers upon the altar of immorality.

“While we support the ability of all our students to explore difficult issues, we also encourage them to do so in ways that are sensitive to others,” says Harvard in a statement that is as incredible as it is ridiculous. “To that end, the Harvard Extension School has worked with the club’s student leaders to address specific concerns that have been expressed.”

Glad they have addressed the sensitivity issues raised by those who would argue that murder, death and destruction are expressions of superior cultural ideals.

And who should be surprised by this turn?

At a time when all is granted moral status, except of course real human morality, we shouldn’t be surprised to see its inversion celebrated as a mode of cultural expression, like a costume party for death or a role playing game where evil is elevated to God status.

When we negotiate with evil, as our society does now repeatedly, we lose our sense of right and wrong by inches.

But the loss is real and the effects will be far reaching; even just in thinking this event was an appropriate cultural celebration, Harvard can never be the same.

Some may celebrate its demise. But not I. Another thing in higher education that could have been used to keep America great has been abused. And that's always the work of evil, I say.