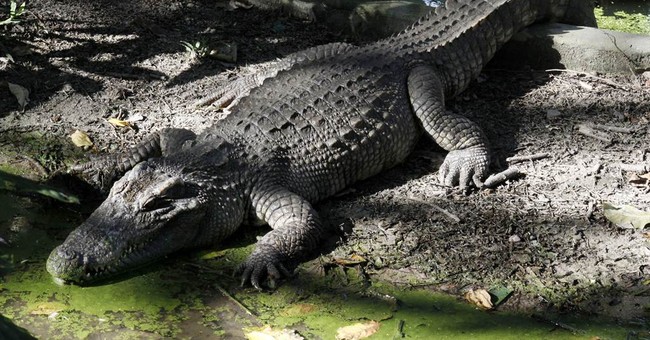 A designer street drug made in Russia has hit the Chicago area according to a drug rehab doctor in Joliet, Illinois. The doctor has said that he’s seen as many as three patients who are suffering extreme effects of the drug.

Some reckon the life expectancy of chronic users at two years.

The flesh-eating crocodile is here, a local doctor said,” writes the Chicago Sun Times. “Three patients have been treated this week at Presence Saint Joseph Medical Center for using a synthetic opiate that doctors say rots the skin from the inside out.”

And the cost for such drug induced delights? Eight dollars a high.

Yet the DEA- and liberals- remains skeptical that a drug made with readily available ingredients, like codeine, butane, gasoline and other wonders of the petro-chemical industry-- and that’s cheap to make to boot-- has arrived in the U.S.

“’We, the DEA, are not seeing cases of it,’ agency spokeswoman Dawn Dearden told FoxNews.com. ‘Nothing’s been turned into any of our labs. As far as the DEA is concerned, we have not seen any cases.’ The agency is not actively investigating the latest report or ones that surfaced late last month in Arizona, Dearden said.”

The Feds know nothing, see nothing. You almost can feel Dearden stick her fingers in her ear, while a colleague reaches around to cover her eyes.

This is the same government to which Russia ratted out the Tsarnaev brothers. They investigated and then… saw nothing, knew nothing-- even as the brothers manufactured pressure cooker bombs to use at the Boston Marathon.

This is the same government that seems to know nothing about healthcare, budgets, Fast and Furious, Benghazi, green energy, voter suppression in Philadelphia, IRS abuses, basic website design, or which hand goes over the heart when singing the national anthem, the words to which, they forget.

Or maybe it’s just that they don’t want to see.

There are lots of things in Chicago people don’t want you to see: Failed union pension and benefit schemes, high murder and crime rates, corruption as a way of life, the failure of gun control policies, plunging real estate values. There have long been places in any city you don’t want to venture, but the economic crisis is helping cities in the U.S. fail at a rapid rate.

“In a World Policy Journal article published this spring,” wrote the New York Times in 2004, “the national security experts Peter Liotta and James Miskel argued that the 'failed state,’ which received so much attention in the 1990's, is being supplemented by the emergence of failed cities, where civil order succumbs to powerful criminal gangs. From Brazil to South Africa, these gangs pose a variety of nontraditional security threats -- from unchecked black-marketeering and the smuggling of people, guns and drugs to public-health breakdowns and alliances with terrorists.”

It’s a trend the U.S. should worry about too.

As the Krokidil drug shows, what’s invented in Moscow- or Sao Paulo- doesn’t stay there.

What are left behind are the people least likely to able to defend themselves from the scourge of gangs and drugs and unilateral disarmament of the lawful citizenry. These people become dependent upon those powerful criminal gangs as the urban failures multiply and economies spin out of control.

“Poorer Americans, including black people,” writes Professor Carl Schramm, who teaches about failed cities at Syracuse, “have had to deal with the problem of chronic unemployment and retreat entirely from the labor force. How is it that advocates for the poor don’t really seem to understand that when our economy doesn’t grow there is no possible way that poverty will ever be reduced?Perhaps it’s because the poor are now permanently attended to by the profession of community advocates.”

Perhaps it’s because the intellectual elite in this country, who are community advocates, are blind to what really happening in the worst of cities in the U.S.

The intellectual elite, you see, wants us to believe that suburbia is dying and cities are thriving.

“The suburbs were a great idea that worked really well for a long time,” author on suburban exodus, Leigh Gallagher, told the liberal flagship, the Washington Post, “but they overshot their mandate. We supersized everything in a way that led many people to live far away from where they needed to be and far away from their neighbors, and that has far-reaching implications, no pun intended. People have turned away from that kind of living.”

Well, if anyone knows anything about over shooting mandates, it’s a liberal.

“But a lot of people think [Millennials are] not going to want cul-de-sac suburbia. They grew up in the back seats of cars, they know what it’s like to have to drive everywhere. They might not mind the suburbs, but they’re going to want the sort of suburb where you can walk to a cute diner.”

Intellectuals think that parents care more about what kind of wine graces the table at your local restaurant, than what kind of environment your kids grow up in.

As a parent, I can tell you, however, cute diners seem really important until one day a Krokidil eats your kids.