Obama and the Art of the Artificial, Contrived and Transparent Crisis 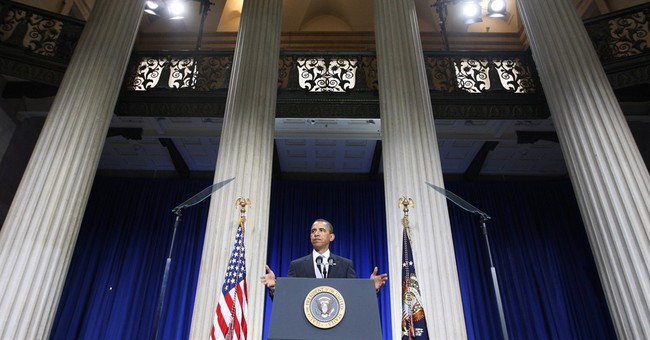 I think that’s it’s safe to say that community organizing is a little bit easier than, say, being President of the United States. Or being a practicing attorney.

Barack Obama has now found that out.

To the sorrow of the rest of us.

And here’s the essential problem with Barack Obama’s resume, as opposed to, say, Abraham Lincoln’s, who also was unprepared to become president of the United States, but made up for it with ability: Obama has spent his whole life being against stuff, protesting against powers higher than himself, blaming those in control.

Lincoln on the other hand showed that he had rare executive ability. He may not have always gotten things done correctly, but he did get things done.

He was a constructive member of his community, and conservative in the sense that he sought to “conserve” liberty; even if his vision of liberty was radical for his time.

“Executive force and vigor are rare qualities,” Lincoln’s Secretary of State, and the man most likely to have been the Republican nominee were it not for Lincoln, William H. Seward, wrote in 1861.“The President is the best of us."

No one would say that about Obama. What he lacks in ability he compensates for in ignorance of the real world with temper tantrums and demands and discord.

That works as a community organizer, but doesn’t work for the man-who-would-be-president.

Presidents negotiate. Until Obama, all of them have.

Before being sworn into office, Lincoln, in a stop in Cleveland, complained about an “artificial crisis” that was being forced upon him by others:

Frequent allusion is made to the excitement at present existing in our national politics, and it is as well that I should also allude to it here. I think that there is no occasion for any excitement. The crisis, as it is called, is altogether an artificial crisis. In all parts of the nation there are differences of opinion on politics. There are differences of opinion even here. You did not all vote for the person who now addresses you. What is happening now will not hurt those who are further away from here. Have they not all their rights now as they ever have had? Do they not have their fugitive slaves returned now as ever? Have they not the same Constitution that they have lived under for seventy odd years? Have they not a position as citizens of this common country, and have we any power to change that position? [Cries of "No."] What then is the matter with them? Why all this excitement? Why all these complaints? As I said before, this crisis is all artificial! It has no foundation in fact.

Despite this, Lincoln still sent people to negotiate with those who would secede.

By contrast, it would be impossible to find any words written by anyone to better describe the policy of the Obama administration than the description of today’s crisis creators used by Abraham Lincoln. Obama talked a lot about transparency when running in '08. We just didn't know he meant he would run the most transparently political and opportunistic government ever.

Obama has assumed powers, without let by Congress, far above those legally allowed a president.

Executive authority, in short, is out of control.

“The president has inherent emergency powers,” said Eric Posner, a University of Chicago law professor, recently. “It has long been understood that the president should act to protect the country.”

While the White House, for now, is publicly rejecting that interpretation in the case of the debt ceiling, no doubt they will trot it out when convenient at some other time when they wish to act in their best interest, politically.

Like, for example, when they need to stop something or start something with Obamacare.

It’s true that Lincoln too had his own problems with executive authority. But yet one can, in good conscience, make the case that Lincoln was engaged in a great civil war, which is inherently an emergency.

While often wrong, Lincoln’s use of war powers was at least defensible.

Obama’s emergency, however, is inherently artificial, gotten up out theories and deconstruction and relativism that says that taxpayers protesting the obligation to pay for birth control out of the public purse is a War on Women, while arresting Catholic chaplains for saying Mass during a government shutdown is a legal imperative.

From the Catholic Archdiocese for Military Service:

There is a chronic shortage of active duty Catholic chaplains. While roughly 25% of the military is Catholic, Catholic priests make up only about 8% of the chaplain corps. That means approximately 275,000 men and women in uniform, and their families, are served by only 234 active-duty priests.The temporary solution to this shortage is to provide GS and contract priests.These men are employed by the government to ensure that a priest is available when an active duty Catholic Chaplain is not present.With the government shutdown, GS and contract priests who minister to Catholics on military bases worldwide are not permitted to work – not even to volunteer.During the shutdown, it is illegal for them to minister on base and they risk being arrested if they attempt to do so.

This is the latest outrage, but it’s hardly the only one.

There have been several occasions when members of the president’s party, if not his government, have talked about the country as if we are engaged in a civil war.

In 2011, the governor of North Carolina, Bev Perdue (D-Defeated) suggested that elections be suspended.

“I think we ought to suspend, perhaps, elections for Congress for two years,” said Perdue according to the Raleigh News and Observer, “and just tell them we won't hold it against them, whatever decisions they make, to just let them help this country recover. I really hope that someone can agree with me on that.”

Just two weeks later then-Rep. Jesse Jackson, Jr., (D-BiPolar) in an interview with the Daily Caller, called on the president to declare an emergency and give every unemployed person a job without congressional authorization: “I hope the president continues to exercise extraordinary constitutional means, based on the history of Congresses that have been in rebellion in the past,” Jackson told the Daily Caller. “He’s looking administratively for ways to advance the causes of the American people, because this Congress is completely dysfunctional.”

Actually the Congress is functioning just like it was meant to. It’s acting as a brake on runaway, revolutionary, out-of-control government.

Obama is functioning just the way he was meant to too: as a community organizer... but not, of course, as the president of the United Sates of America.

He lacks the training, the resume and the temperment.