It’s not too early to start thinking about how the next great crisis in the auto industry will shake up the world.

With the general economic slow down worldwide, declining auto sales and uncertainty surrounding the future direction of the automotive market, another automaker meltdown isn’t out of the question.

And because the high profile federally-financed bailout for GM has generally gotten poor reviews from politicians, voters and Wall Street, General Motors is a good place to start to look at what the next automotive bankruptcy could entail.

Already there is at least one suit pending that threatens to undo the work of the first bankruptcy.

“The new General Motors Co. (GM) could be undone by a lawsuit that pits general creditors against hedge fund,” reports Bloomberg, “including Elliott Management Corp. and Fortress Investment Group LLC (FIG) over $3 billion, the car company said in a lawsuit that went to trial today.”

The trustee for the old GM is contending that certain hedge funds got special treatment from the company while the company was preparing for bankruptcy. The trustee is asking for the court to reverse almost $3 billion in claims by the hedge fund.

If that happens, GM claims that it would essential nullify the sale of new GM by the old bankrupt GM, which will create a mulligan for the entire bankruptcy since 2009.

The court trial began yesterday. If the plaintiffs are successful, it would result in GM being restored to pre-bankruptcy days, a situation that GM characterizes as “chaotic” according to Bloomberg.

Barring those developments, there is sizable room for worry.

While GM has a big cash stake of about $34 billion according to Seeking Alpha - a little less if you look at figures from Capital IQ- the company also has $134 billion in pension liabilities, of which about $25 billion is currently unfunded.

In fact, the company is trading at about the same amount of cash they have in the bank. That’s usually not a very good sign for a publicly-traded company.

It’s those pension liabilities that that have the street worried, says Robert Broens of Seeking Alpha.

“The company operates with roughly $14.7 billion in short and long term debt. The company furthermore has massive pension fund liabilities and retirement benefits outstanding,” greatly affecting valuation. To help make good those pension liabilities is why the U.S. government gifted a portion of the bailout proceeds to GM.

In the quarterly report released in August the company said that “certain retired participants in the salaried plan are being offered lump-sum distributions. Retired salaried employees that are not offered lump-sum distributions or those that decline the lump-sum offer will receive annuity payments from [an] insurance company in accordance with the terms of the group annuity contract. We expect to incur pre-tax special charges in the range of $2.5 billion to $3.5 billion ($3.0 billion to $4.0 billion after tax) in the second half of 2012,” in order to fund the annuity contract.

While the company would like to make us all believe that U.S. sales are robust, and all the troubles are in Europe, the truth is that bigger manufacturers like GM have been getting out-hustled the last two years by smaller competitors says Autonews.com

“July industry volume is up 10 percent,” says Autonews, “but not for the four best-selling automakers in July 2010: Ford 1 percent higher, GM 2 percent, Honda 4 percent and Toyota group is down 3 percent. So who's winning the July 2010 to July 2012 comparison? The next four in line. Then No. 5, but now No. 4, Chrysler Group is up 35 percent in two years. Hyundai-Kia Automotive is up 23 percent, Nissan Motor Co. 19 percent and Volkswagen of America 54 percent.”

The problem is that the bigger companies dominate the market for trucks, which American drivers love. Ford and General Motors each produce more trucks than cars. Truck sales have surged from around 2 million in 1980 to over 9 million units today, more or less. Truck sales however, are more dependent on economic factors like the housing market, the small business environment and gas prices than cars are. If the economy is not growing trucks sales get hurt.

Sales need only decline to from about 14 million vehicles currently to 10 million in the U.S. in order to undo the math on which the GM bankruptcy was predicated. 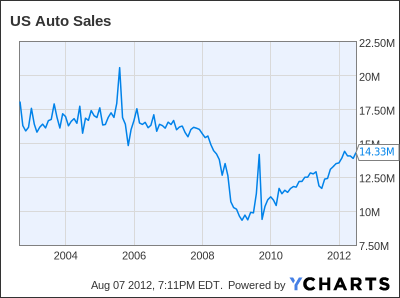 US Auto Sales data by YCharts

As sales decline in the wake of a stagnating economy in Europe, China and the U.S., it’s quite possible that GM could face a cash crunch from those overhanging pension liabilities.

With the likelihood of further stimulus measures fading, incentive programs like cash for clunkers having run their course, the next bankruptcy certainly would be forced to deal with the pension liabilities- which represent the biggest long-term threat to GM’s survival- in a much more honest way.

In short, the next GM bankruptcy, with it's dooming pension drag, will look an awful lot like the last one.

But maybe next time someone can re-build GM, you know, to last.

A Group Of Parents Sent Their Kids' Face Masks to A Lab for Analysis. Here's What They Found
Townhall
Fact-checkers? President Biden tells the press that criminals killed a police officer at the Capitol on January 6
Twitchy
Peter Doocy Muscles Way in to Ask Biden About China, Gets Answer That Should Alarm Everyone
Redstate
Atlanta May Be Headed for a Final Divorce as Communities Nationwide Seek to Redraw the Lines
PJ Media