General Motors: Obamacare Wrapped in Solyndra Inside Some Misery

General Motors, the auto company that vice president Joe Biden likes to claim Obama saved singled-handedly during the virgin birth after which the One was swaddled in a manger, is facing a class action lawsuit for making “materially false and misleading” claims in the prospectus for the new issue of stock it offered as it moved out of bankruptcy in late fall 2010.

A statement issued by the law firm representing the class “alleges that the defendants misrepresented and/or failed to disclose that: (1) GM was predicting revenue based on production rather than actual sales; (2) the Company falsely assured investors that it was actively managing its production by monitoring its dealer inventory levels; and (3) the Company assured investors that its inventory management would improve in 2011, which would improve average transaction price.”

GM stock has been in trouble since it was issued, drifting downward from $33 in November of 2010 to a close of near $19 today. The company currently has a market capitalization of around $29 billion after offering about $22 billion in stock to the public a year and a half ago.

In addition, the company also received $52 billion from the U.S. Treasury, $9.5 billion from the Canadians and $12 billion in tax losses carried forward from the pre-bankruptcy days- which for the rest of us regular Joes would be illegal. Oh, then there was that little issue of not paying taxes on the loan that Obama decided to turn into a gift- which again would be illegal for the rest of us.

Just to break even on the part of the money that the U.S. government didn’t make an outright gift, the stock price would have to hit about $51.

Here’s more of that famous Obama math for you junior progressive economists. Pay attention; this is what gave us a jobless recovery. Some day you too might want to grow up and create a jobless recovery for your country:

No wonder Obama likes this company. This is like Obamacare wrapped in Solyndra inside some misery.

At issue isn’t so much the stock price of GM but whether or not the company was “built to last” as it came out of bankruptcy.

After a year of intolerable claims of record profits from GM by anyone connected with the administration, the business results are starting to better reflect what investors have been saying all along: GM’s a dog.

Any company can fake profits for a little while when $100 billion in cash is thrown at it.

Meanhwile, in the real world, General Motor’s profits fell 41 percent in the second quarter of this year.

While the company blames it all on Europe, only $361 million of an estimated $1 billion in missing profits came from Europe. Simple math would tell even Obama that $639 million came from stalling profits from places NOT named Europe.

“GM's profit from April through June dropped to $1.5 billion,” reported the Knoxville New Sentinel, “$1 billion less than the same quarter a year earlier. It had a $361 million pretax loss in Europe and $19 million of red ink in South America. In North America, pretax profits fell nearly 13 percent to about $2 billion. International profits, including Asia, also dropped, by 3 percent to $557 million.”

If I were the guys who falsely claimed in 2010 that GM repaid 100 percent of the loans the government gave them and then spent 2011 bragging about how the company made record profits on the strength of turning $100 billion in cash into $29 billion, I’d be puckering up about that class action lawsuit right about now.

They ought to consider that Obama won’t be president forever, and maybe, just maybe Mr. Romney would join the lawsuit on behalf of the American taxpayers. 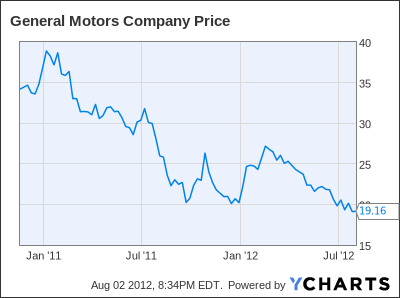 Of course the federal government already owns about 60 percent of the stock anyway, so there would never be a need to join the lawsuit. The government can kick out management whenever they want.

And that might be exactly what Mitt does before he dumps 500 million shares of GM.

In February of this year, as GM stock traded between $25-$26, Romney drew the wrath of that great professional investing class, establishment journalists, when he called for the U.S. to divest itself of the GM stock.

“If the government moved now to dump the 500 million GM shares that it still owns, as Romney suggests,” wrote thousandaire or hundredaire mogul investor, CNNMoney reporter Charles Riley, in a typical hit from the establishment press, “taxpayers would be guaranteed to take a loss.”

Because from where I’m sitting, Mitt’s been right all along. On the other other hand, your strategy, Charles, lost taxpayers another $3 billion.

"If General Motors, Ford and Chrysler get the bailout that their chief executives asked for yesterday, you can kiss the American automotive industry goodbye," Romney wrote in November 2008 according to CNNMoney. "It won't go overnight, but its demise will be virtually guaranteed."

Over the next year of so the drama at GM should be played out. And  then we'll know one way or another.

But I don't really need to know, to know.

But we already knew that.