In another blow to Obama’s reelection bid, consumer confidence, which has been low throughout Obama’s presidency, stumbled badly last month after economists initially predicted confidence would go up.

The number indicates that the onslaught of people and politicians abandoning the S.S. Obama continues unabated. In recent weeks, allies of Obama have defected from his campaign message if not from his person. Forget about polls numbers for a moment. Consumer confidence is the number that tells you what is really behind the defections.

"Consumer Confidence fell in May,” said Lynn Franco, Director of Economic Indicators at The Conference Board, “following a slight decline in April. Consumers were less positive about current business and labor market conditions, and they were more pessimistic about the short-term outlook. However, consumers were more upbeat about their income prospects, which should help sustain spending. Taken together, the retreat in the Present Situation Index and softening in consumer expectations suggest that the pace of economic growth in the months ahead may moderate."

In actuality, soft consumer sentiment is not just a vote of no-confidence in Obama, as it is in the whole silly progressive Democrat ecosystem- are there any moderates left on the Left side of the aisle?-  that’s been propping him up for three years.

Because it’s not just consumers who are looking to duck and cover.

Businesses are also worried about the future.

So really, you can look at dividend futures expectations as kind of consumer confidence number for business. When the number goes up, it means that companies are confident enough in the future to part with cash today in order to boost their stock price and investment return for shareholders. When the dividend number goes down, it means that companies are holding on to cash. 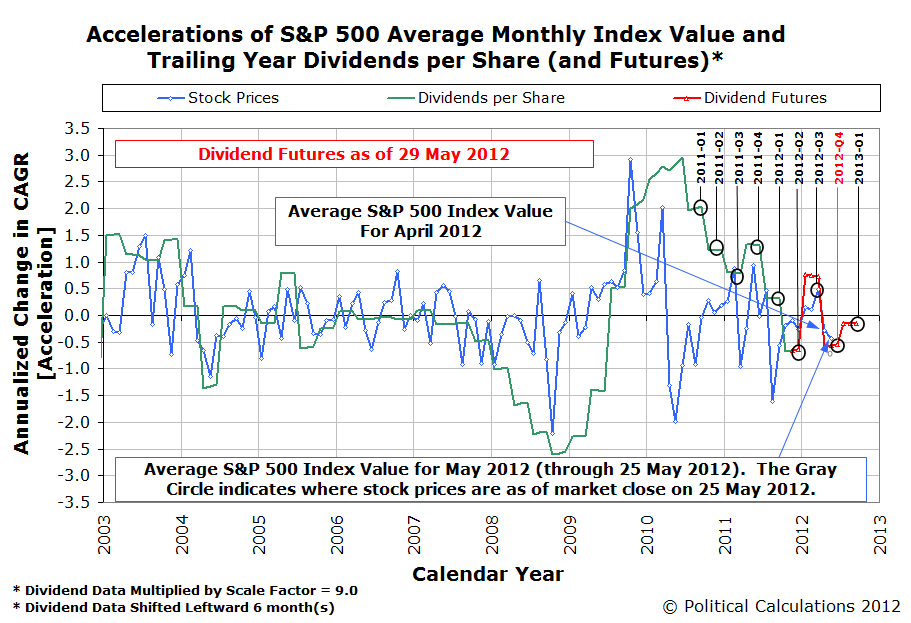 Why would companies hold on to cash?

There is only one reason: They think they will need it.

Ironically, CEOs are relatively confident about business conditions in the months ahead.

The Conference Board, which conducts the consumer confidence survey, also surveys CEOs.

In the most recent survey “about 59 percent of business leaders foresee an improvement in economic conditions over the next six months, up from 32 percent in the fourth quarter.”

I think in part CEO confidence is surging because it looks increasingly likely that some or all of the following could happen in between now and the first of the year: Obama will be defeated, Obamacare will be overturned, and the GOP could pick up seats in the Senate and the House.

As Obama’s campaign rhetoric has become shriller in the last year- a sign of his desperation if ever there was one- even allies have begun to abandon Obama, just as I predicted.

The first congressman outside of Illinois to endorse Obama has not only has repudiated him, but has also left the Democrat Party and might run as a Republican:

“The one-time rising Democratic Party star -- once described as the Obama of Alabama,” reports USAToday, “said on his website that he is switching his voter registration to Virginia and is considering running for office as a Republican. Davis was also critical of the Obama administration, with whom he was sometimes at odds while in Congress on issues such as health care.”

Said Davis in a statement:

On the specifics, I have regularly criticized an agenda that would punish businesses and job creators with more taxes just as they are trying to thrive again. I have taken issue with an administration that has lapsed into a bloc by bloc appeal to group grievances when the country is already too fractured: frankly, the symbolism of Barack Obama winning has not given us the substance of a united country.

Davis is the second high profile black politician to break with Obama in recent weeks.

Last week I wrote about how Mayor Cory Booker, a Democrat from Newark, New Jersey- and Obama campaign surrogate- leaned into the inside pitch Obama made criticizing Mitt Romney’s experience in private equity at Bain Capital.

“To me, it's just, we're getting to a ridiculous point in America,” said Booker. “Especially, I know, I live in a state where pension funds, unions and other people are investing in companies like Bain Capital. If you look at the totality of Bain Capital's record, they've done a lot to support businesses, to grow businesses, and this to me, I'm very uncomfortable with.”

And apparently so is everyone else.