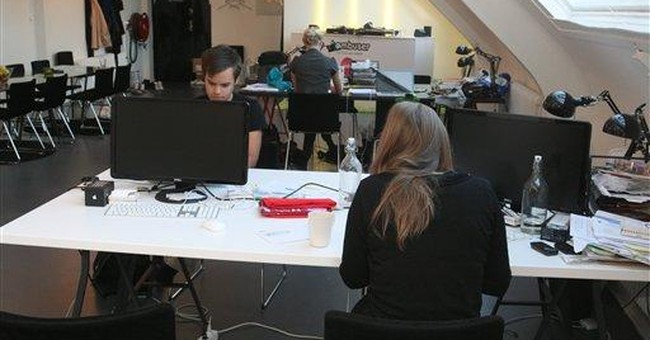 We tackle the economy, finance, maids (but not in the same way as DSK did) and home-schooling moms in plaid smocks who make us all so nervous when we fly.

Clash wrote: For a guy who is the "Finance Editor" of Finance Townhall.com, Ransom never seems to write any thing about financial matters or issues. – response to my column Obama, Your Jimmy Carter is Showing

Actually I write quite a bit about financial topics.

This week you should take a look at  O-pocalypse Now and A Rape Too Far. The piece on the IMF’s Strauss-Khan getting busted for rape is both political and financial. That’s the strength of Townhall Finance, as opposed to say, CNN Money.

In addition to my top-of-the-news daily columns, which apparently are the only things you read, I write a blog that concentrates almost exclusively on money and markets at the Ticker.

As editor, I also am responsible for recruitment of columnists who write about finance.

If you look around the finance site, the amount of content related to money and markets is increasing, especially as it relates to investment commentary. That’s something that will accelerate going forward.

But my daily column will generally touch on topical news items.

Readers seem to enjoy it and so do I. And as editor, these are the types of decisions I get to make.

Royal Palm Ballroom wrote: To John Ransom: There isn't any biographical info about you like there is for the other Townhall.com "columnists". Are you ashamed of your educational and professional background that you won't allow a bio to be posted about you? – response to my column Obama, Your Jimmy Carter is Showing

What would we do every week if we didn’t have you around to change the subject, or get off topic?

As I told another reader, the problem is that, genetically speaking, I’m an exact copy of both Koch Brothers. We wouldn’t want that to get around. So I’m keeping those records in the same fire-proof box that the Obama administration kept his birth certificate for the last 3 years.

Starting in 1994, I followed in my family’s tradition and I worked as an investment executive to several NYSE-member investment firms. I also co-founded a small boutique investment firm and worked for a merchant banker.

Then 19 hijackers crashed planes into buildings in NY City and Washington, D.C.

Because of that event, I altered the goals of my life considerably.

Coopmeister wrote: Businesses have added a net total of more than 250,000 jobs per month, on average, in the past three months. That's the fastest hiring spree in five years. –in response to my column O-pocalypse Now

As Mark Twain observed “There are lies, damned lies and statistics.”

When he said “statistics” he might as well called out the government by name.

The problems with the jobs report is that it can be manipulated, and usually is, for political purposes.

I noted on our blog the Ticker on May 6th, “The BLS estimates birth and death of private companies and consequent jobs created by them. These numbers have no basis in fact. They are just numbers pulled out of the air.”

IBT confirmed it: "For those of you keeping track at home, the birth death adjustment was 175K [jobs], a quite massive figure."

And Townhall Finance columnist Mike Shedlock said at the time, "In recent years Birth/Death methodology has been so screwed up and there have been so many revisions that it has been painful to watch."

But getting past the numbers: Are you really trying to argue that the economy is in the best shape in five years? Is that why our debt has been downgraded and the dollar is tanking?

Is that why notable liberals like Warren Buffet and PIMCO’s Bill Gross are betting against the dollar and Treasuries?

King wrote: Mr. Ransom: What's the real reason you don't like Gingrich. I'm personally ambivalent, but sense something else is nagging you...and I want to know what it is. –in response to my column She Turned Him into a Newt

I personally have no feelings for or against Newt. I don’t know him personally. I know some people who worked for him and liked him a lot.

My argument with Newt is that politically he’s been an opportunist.

In my opinion, that’s the general problem with the GOP. It has too many opportunists and not enough people of real conviction.

As my friend Charles Heatherly, the Policy Director for Colorado Senate Republicans, has argued: Being pro free market and pro business are very different things.

Pro business has too often meant business-as-usual with the GOP. Some Republicans are just as willing to give welfare to Wall Street and pharmaceuticals as Democrats are to everyone else.

Nobody better exemplifies that modus operandi than Newt.

Para_dimz wrote: People make fun of Ron Paul. Newt does the crazy uncle gig like a pro. Let's hope this was his final encore performance. – in response to my column She Turned Him into a Newt

Newt’s never been the “crazy” uncle.

He’s been more like the uncle you wish would just pack up and head home and stop making long-distance phone calls and eating up all your Oreos as strange sounds come out from one end or the other.

Ray wrote: I'm always "amused" by these women who pop up eight to ten years after they were "raped" and who are ready to testify that so and so jumped their bones without permission umpteen years ago. What held them back from complaining before - bribes? Interesting that the maid was not able to overpower a 62 year old man. - in response to my column A Rape Too Far

If you find anything amusing about the revelation that Strauss-Khan may have raped a woman ten years ago, then you’re nuts.

I don’t mean that rhetorically either.

You might be a danger to society.  And yourself. Please see below.

And the goshdarn Liberal wrote: My, oh my, the party of moral hypocrisy strikes again. - in response to my column A Rape Too Far

I hope you and Ray don’t meet up one night in a dark alley.

How do you go through life pretending that having no standards of behavior at all is the moral equivalent of having standards and sometimes-often even- failing to live up to them?

Few people make the claim that ALL imams are plotting to murder and maim. I certainly did not. But it’s not “just as incorrect to say.”

Your assertion that just a “few” imams and Muslims are misguided is incorrect firstly.

We can quibble quantifying the number, but however big the number actually is, the real number of “misguided” Muslims in America is, statistically speaking, way-the-heck too many for any of us to accept.

We should no longer tolerate even ONE of them.

Despite claims to the contrary, the U.S.A is a very welcoming, warm-hearted country.

Try being an illegal alien in somewhere like Russia, or Iran or Mexico.

Try wearing a burqa in France.

As to the question how many people blamed “all” white men when McVeigh blew up the Oklahoma City building?

When Time wrote “mostly men” they meant “mostly white men,” even if the “white” was only implied.

Since that time how many acts of terror have been committed by “tax protesters; Christian home-schoolers; conspiracy theorists influenced by the John Birch Society's fear of one-world government; Second Amendment activists (mostly men)?”

How many Iranian naval vessels have been bombed by Christian home-schooling moms in smocks?

During the same period, how many acts of terror with mass casualties have been perpetrated in the name of Islam?

How many times have you stood up in your community and condemned the terrorist?

How many have you rooted them out?

Now, how many times have you whined on a bulletin board about the bad rap Muslims get?

That brings us lastly to Mo. I’m going to let Mo speak for himself (herself?).

Mo wrote: So while the core issues of the conflict must be negotiated, the basis of those negotiations is clear: a stable Mexico and a secure United States, whose sovereignty and laws are respected. Israel believes that negotiations should result in two stable and secure states, with permanent borders and bi-national support upholding the laws controlling crossings and immigration. The borders of the United States and Mexico should be based on the 1848 lines with mutually agreed swaps, so that secure and recognised borders are established for both states. The Mexican people must have the right to rid their country of the plaque of drug cabals and government corruption themselves, and reach their potential, in a sovereign, stable state.

As for security, every state has the right to self-defence, and the United States must be able to defend itself – by itself – against any threat, including unlawful immigration, drug trafficking, terrorism, and gang violence . Provisions must also be robust enough to prevent a resurgence of border lawlessness; to stop the infiltration of drugs and illegal immigrants; and to provide effective border security. The full and phased in border control and joint task forces to police and patrol the region to protect lawful residents and property owners should be coordinated with the assumption that border security and human dignity are shared responsibilities.

These principles provide a foundation for negotiations. Mexicans should know the territorial outlines of their new, enlarged state; Americans should know that their basic security concerns will be met. I know that these steps alone will not resolve this conflict. Two wrenching and emotional issues remain: the future of San Francisco and the fate of illegal aliens and their children. But moving forward now on the basis of territory and security provides a foundation to resolve those two issues in a way that is just and fair, and that respects the rights and aspirations of Americans and Mexicans.

That is the choice that must be made – not simply in this conflict, but across the entire region – a choice between hate and hope; between the shackles of the past, and the promise of the future. It's a choice that must be made by leaders and by people, and it's a choice that will define the future of a region. - Israel Prime Minister Binyamin Netanyahu Address to a Joint Session of Congress 23 May 2011– response to my column Obama, Your Jimmy Carter is Showing

Have a great weekend.