John P. Warren
|
Posted: Oct 27, 2016 9:43 AM
Share   Tweet
The opinions expressed by columnists are their own and do not necessarily represent the views of Townhall.com. 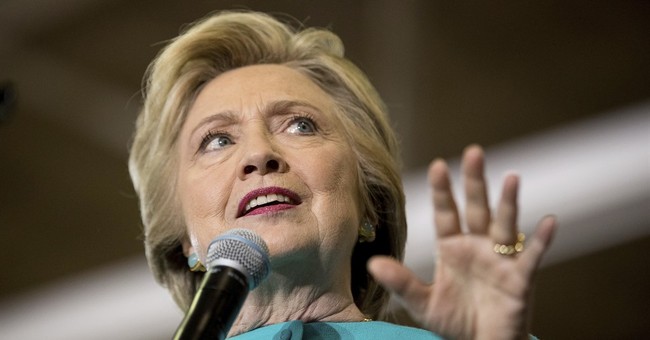 In the run-up to the 2008 election, Michelle Obama famously said of her husband’s principal opponent, Hillary Clinton: “If you can’t run your own house, you can’t run the White House.” The Obama campaign further took Bill Clinton down a peg by suggesting the self-styled “America’s First Black President” was a racist.

Along with Hillary Clinton’s return volley that Barack Obama was a man of no experience whatsoever and unqualified for the office of president, members of her campaign allegedly furthered the birther narrative. Although her surrogates have vehemently denied it, recent revelations about campaign dirty tricks against Bernie Sanders and Donald Trump tend to make the birther denials less than believable.

Those wounds could not have healed over very easily. On both sides, they were jagged and deep, and some insiders maintain they have never healed, but merely scabbed over. That being the case, then, one has to wonder about the current lovefest among the top echelons of the Obama-Clinton caporegimes (and they are almost like mob families, aren’t they?).

Of course, many administrations work to help the election of their party’s anointed. Going back to Lyndon Johnson and Hubert Humphrey, however, Democrats have been more renowned than Republicans for refusing to feed their young. It’s also true that Ronald Reagan did not work overly hard for GHWB, and certainly, Bill Clinton did no favors for Al Gore. Gore most probably did not want Bill Clinton’s help given the latter’s personal circumstances at the time, and neither did John McCain want GWB’s help in 2008.

When one considers the state of the world, the weak economy, the devastating news about Obamacare rates, and the Obama-Clinton history, one might reasonably have expected some distancing, perhaps, even polite antipathy between the two. But no.

“Why?” is the question still burning brightly. Barack Obama and Hillary Clinton owe each other, to be sure. He owes her because she’s his only hope to continue the far-left, progressive agenda he initiated (with the Tom Hayden crowd in the forefront). If he is way left on the political scale, she is more so, and of course, she knows way too much about Obama’s foreign and domestic policy chicanery to be ignored.

For her part, she owes Obama big-time. To this observer, this is the first time that not only have top administration personnel been out hustling dollars and votes in a big way, the incumbent has bent the entire administration to clear her path to victory. That’s putting it nicely. By all accounts, her campaign would have been fatally derailed had the Obama administration been remotely impartial regarding Clinton’s “extreme carelessness” with classified information and worse, the highly aromatic pay-to-play schemes running the past eight years.

What’s in it for Obama is a continuation and expansion of Obamacare into a single-payer health law that apparently, was the healthcare endgame all along. Her election furthers abortion on demand through the end of pregnancy and partial birth abortions without limitation. The “deep-seated beliefs” to which Hillary referred amongst the 100 million still religious in this country will be attacked high and low. Open borders will prevail, thus enslaving within the welfare system millions of doomed inner-city dwellers unable to compete for low-end jobs. What’s also in it for Obama is a SCOTUS nomination and when John Roberts retires, a nod for the Chief Justice’s chair—and another historic first. That’s how progressives will seal the deal “constitutionally.” From within. Without a shot. Not a bad haul for a community organizer.

For her, of course, it’s the presidency of the United States, a historical mark for the first woman to hold the position, and the Teflon that goes with being the first big anything. On a truly personal note, it means the opportunity to bury forever all the guilty secrets about Benghazi, Iraq, her email servers, pay-to-play, and any other scandal Wikileaks has not yet revealed to us. No criminal record for the Clintons—ever.

For all the noise about Donald Trump’s taxes, just try to find solid information about the net worths ofHillary and Bill Clinton. There’s a lot out there, most of it mush. The Clintons, of course, have been raking it in for two decades, so their megamillions are no surprise. One has to wonder—if you follow the money—and IF the Clintons have been guilty of criminality—how many public and private consciences have been eased with…whatever…over the years. So much for public servanthood!

In spite of a cast of players that make Warren G. Harding’s crowd look positively Mother Teresa-like (sorry, Saint Teresa), I heard a cable channel interview on XM on the way home today in which a well-known pundit, proudly a registered Republican, said he couldn’t possibly vote for Donald Trump because he can’t believe a word of what Trump says about things like NATO. Apparently, this otherwise bright guy believes Clinton, and said he would vote for her and all down-ballot Republicans. Really? Not vote for Trump? Not abstain? Not protest vote for Johnson or Stein? Really?

A well-known national publication is reported to have recently opined that Hillary may have a greater mastery of the Constitution, but represents a greater threat to our liberties. THAT, in a nutshell is what this election is all about: a threat to our liberties. Donald Trump, for all of his ineptitude as a polished, political hypocrite represents none of that. He loves America way too much.

Donald Trump is not an ideal candidate, but the progressive alternative will edge us closer to liberty’s abyss. Of that I am certain. Those with any sense at all will vote Trump and give him the Republican House and Senate votes to make our country the best it can be.