John P. Warren
|
Posted: Jan 05, 2016 11:45 AM
Share   Tweet
The opinions expressed by columnists are their own and do not necessarily represent the views of Townhall.com. 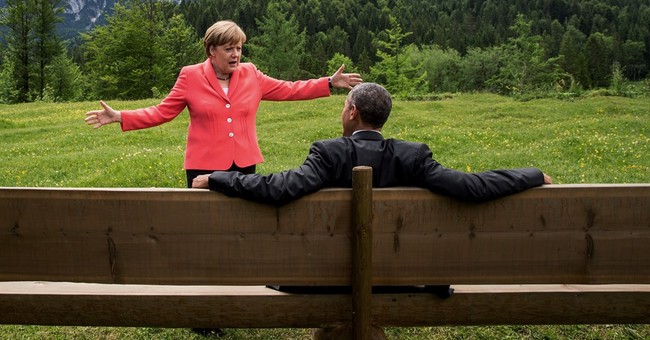 My grandfathers signed their names with an “X.” Though both were ethnic Poles, and thoroughly so, Josef was under control of Czar Nicholas II, Emperor and Autocrat of all the Russians, when he escaped conscription for the Japanese war in 1905, and Stanislaus was a subject of Franz-Joseph, Emperor of Austria, when he fled a forsaken farm west of the Carpathians in 1913. They never looked back.

Like spattered mud, they and their brothers, along with so many other lowly refugees and immigrants, landed all over the eastern United States, from Scranton to Buffalo, then to Cleveland and Detroit, and all points in between where there was a coal seam to be dug or a mill to be manned. They had few worldly goods and possessed no loyalties to “the old country.” Raising families, they produced police and firemen, doctors and lawyers, university professors, accountants, engineers, and just plain ordinary folks who found a place somewhere in the middle rungs of society. Except in war, not one of my forebears murdered anyone for political or religious reasons.

By the millions the immigrants and refugees came, and by the rules, they struggled to enter where “streets were paved with gold.” The U.S. was a destination to which many came, but not all were given access, to power the greatest economic engine the world has ever seen. All of it crashed in 1929, and for the next fifty years, we became ever more selective about those permitted to join us.

Democrats in the 1970s, then liberals, and now, progressives—aided by Republicans and Indies—convinced enough majorities the Horn of Plenty had no end. Over time, the inordinate decency of Americans to welcome and shelter others morphed into some sort of entitlement to come in and take what we’ve built, if only to ease liberal guilt over our extended success as exemplar to the world.

President Obama and his friends have ignored the conundrum of their making: they’ve worked hard to ethnically cleanse, if you will, as many traces of western culture (read Greek, Roman, European, English-speaking) from our educational and societal foundations, replacing them with “correct” political choices. At the same time, they’ve insisted we emulate the de-Christianization of Europe, adopt their open-borders philosophy, and worst of all, embrace their notion of multiculturalism.

In a recent article for Foreign Affairs, Kenan Malik, a columnist for The International New York Times, decried “The Failure of Multiculturalism—Community Versus Society in Europe,” and the lessons learned there, as he describes them in detail, are object lessons for every “Office of Multiculturalism” fiefdom in every university and city across America. “Thirty years ago,” he writes, “many Europeans saw multiculturalism—the embrace of an inclusive, diverse society—as an answer to Europe’s social problems. Today, a growing number consider it to be a cause of them,” producing, “a mismatch that has eroded social cohesion, undermined national identities, and degraded public trust.” Sound familiar?

While Malik describes a number of immigration approaches—“assimilation” in France or ethnic stakeholder competition in Britain, Germany’s ethnic isolation approach is what has great relevance for us. Germany satisfied its thirst for labor with emigrants, considering the three million Turks, amongst others, Gastarbeiter, or Guest Workers, who would fill a need and return to their native land when their usefulness ended. Most were refused citizenship along with any children born in Germany. In the 1980’s, German politicians “encouraged Turkish immigrants to preserve their own culture, language, and lifestyle,” and it proved, “a convenient means of avoiding the issue of how to create a common, inclusive culture.”

Initially, Turks were secular and the few religious ones “rarely” exhibited extremes in beliefs and practices. Now, a third attend mosque and their daughters wear headscarves. According to Malik, “many Turks don’t bother learning German.” Surely, jihadism has found its growth medium, and because of this nationally induced isolation, ethnic Germans view their Turkish residents—many of over thirty years’ standing—with increasing suspicion and hostility. Sound familiar?

At this point, many would say we didn’t invite 12 million Latinos into our homeland, and so, our situation is different. Are we sure about that? During the same period, starting with a Reagan amnesty and continuing to the present day, we all but flung open our Mexican and Canadian borders, despite the artificial crossing stations in places like Buffalo and Tijuana. For the decades that American businesses crooked their fingers to attract laborers, construction, and service people all over the country, and that other Americans hired housecleaners, nannies, and gardeners—and everyone benefitted from the lower costs of having them, there’s no doubt we “invited” our southern neighbors and winked at the legality of it all. Along with millions of hard-working, decent people, there came undesirables, and for them, deliberate, selective deportation has been an enforcement tool too little used.

What’s also happening here with Latinos and with other ethnic groups, specifically Muslims, is what happened in Germany—the abject failure of a multicultural policy that isolates non-citizen peoples in the name of diversity while shredding the social fabric. Denying a path to citizenship for all will spawn many nations within our borders, and ultimately, condemn our children to the brutish consequences all Europe is beginning to experience.

What it all means is that immigration issues aren’t just about entering this country. It’s about what happens—to immigrants and to us—afterward. In the end, how we treat one another will define us as another failed European model or what we want to be: one nation, now all the richer.

Out of the diversity the Irish, Germans, Italians, Japanese, Scots, Jews, Swedes, Chinese, and so many others brought with them a hundred years ago, was forged the same immigration policy my Polish grandparents found to be true: Work hard, learn English, fit in, serve the nation, be an American.